Does Crystal-Infused Water Actually Do Anything?

written by
Beth Krietsch
Beth Krietsch is a freelance health and food writer with a Masters degree in Public Health Nutrition. She covers food and nutrition for Byrdie.
Byrdie's Editorial Guidelines
Beth Krietsch

Sipping from a crystal water bottle is trendy by nature. For one, these bottles are stylish—how could a glass bottle with a crystal inside not be kind on the eyes? Beyond aesthetics, the brands behind these gem-filled vessels say they have myriad benefits, like healing properties, rejuvenation and support of the body, spirit, and mind, improved energy and well-being, and decreased anxiety.

But whether these benefits truly exist or people are simply experiencing the benefits that come with hydration—well, that’s up for debate. To learn more about crystal-infused water, we spoke to a physician, a registered dietitian, a naturopathic doctor, and an acupuncturist. Here’s what they had to share about this crystal-infused water craze.

Is drinking crystal-infused water good for your health?

Registered dietitian Martha Lawder says there aren’t any health benefits to drinking crystal-infused water, but, as expected, there are many health benefits to drinking water in general. “Depending on age and sex, our bodies can range from 50 to 75 percent water,” she says. “Making sure you are well hydrated will keep your body functioning well, including your metabolic activity. I would encourage any consumer to think critically and consider if the improvements in energy and well-being are coming from drinking the water itself. If drinking water from a crystal water bottle encourages you to drink more water, then enjoy, but you're likely getting more benefit from the water.” Physician John Morton, who is the section chief of Bariatric & Minimally Invasive Surgery at Yale Medicine, agrees: “There’s no science behind the trend of crystal water bottles, but there is a lot of research that shows the importance of hydration for living a healthy lifestyle and preventing weight gain.”

Kate Denniston, a naturopathic doctor based in Los Angeles, also hasn’t seen any studies that show physical health benefits to drinking crystal-infused water, but says this doesn’t mean benefits don’t exist. “There's a lot we don't know,” she says. “If someone thinks they are getting health benefits from drinking crystal-infused water, they likely are.” She points to the power of the placebo effect, noting that studies show that placebos can actually cause measurable changes in neurobiological signaling pathways. In other words, if you think the crystal is contributing to an overall better disposition, there's a chance it is.

Also worth noting, Denniston says there's weight in the power of intention. Crystals often represent intentions like health, energy, or forgiveness, she says, and seeing a crystal in your water bottle every time you take a sip is a consistent visual reminder of the intention behind the crystal. “Visualizing and focusing on positive intentions are likely to make us feel better too,” Denniston says. “Every athlete knows the power of visualization.”

Elizabeth Trattner, a licensed acupuncturist and integrative medicine practitioner, says that crystal-infused water carries the "vibration" of the stone. “Gem elixirs are energy medicine," she explains. "They have been used in traditional Chinese medicine for thousands of years—other cultures have made gem elixirs as well. It wasn’t too long ago that acupuncture, reiki, homeopathy and sound therapy were all looked at as pseudoscience and now there is hard clinical evidence that these energetic medicines work.”

“The best water bottle is one that encourages you to ingest between six to eight 8-ounce glasses a day and is BPA-free, because BPA is a known obesogen,” Morton says. It's also a known endocrine disruptor and mimics estrogen which in turn upset normal bodily functioning.

Obesogens are chemicals that may increase your sensitivity or susceptibility to weight gain.

Is there any harm in drinking from a crystal water bottle?

Lawder says there’s probably no harm in drinking water from a crystal water bottle, but encourages people to make sure the bottle is safe and the crystal can't pose any danger; she mentions it's important to check the potential for the crystal to become dislodged and pose a choking hazard.

Denniston points out that there’s the possibility of some elements leaching from the crystal into the water, which can be harmful to health when consumed in high amounts. “Crystals are a composition of elements,” she says. “Most elements are health-promoting for the body in small amounts, but some elements can be toxic in high amounts, like mercury, iron, copper, lead, aluminum, and arsenic."

Then there's the issue of fruit-infused water: If your normal go-to for making water more palatable is to add a slice of citrus, you’ll probably want to stay away from that habit when using a crystal water bottle. “Elements are more prone to leaching into acidic water, so this is especially true if you're adding fruit to your water, like lemon or orange,” Denniston says.

Which type of crystal water bottle should you purchase?

Before buying or using a crystal water bottle, make sure to do your research and understand what elements your crystal water bottle contains and if there are associated health risks for each. Quartz, Denniston says, is made of silicon and oxygen and is generally pretty safe.

Silicon is actually a very important mineral for skin integrity and overall health," she explains. "It helps build collagen, which keeps skin elastic and plump. It helps support connective tissue in joints and blood vessels, reducing the risk of injury and keeping blood vessels strong and flexible. Silicon is also important for bone health and may also reduce the risk of osteoporosis in post-menopausal women.”

Trattner encourages you to make sure the stones in your crystal-infused water aren’t toxic and don’t contain aluminum. Additionally, he says if you’re buying a crystal water bottle, “Be careful where the stone is from [and check] the adhesive used in the bottle and if the glass is leaded,” she cautions. 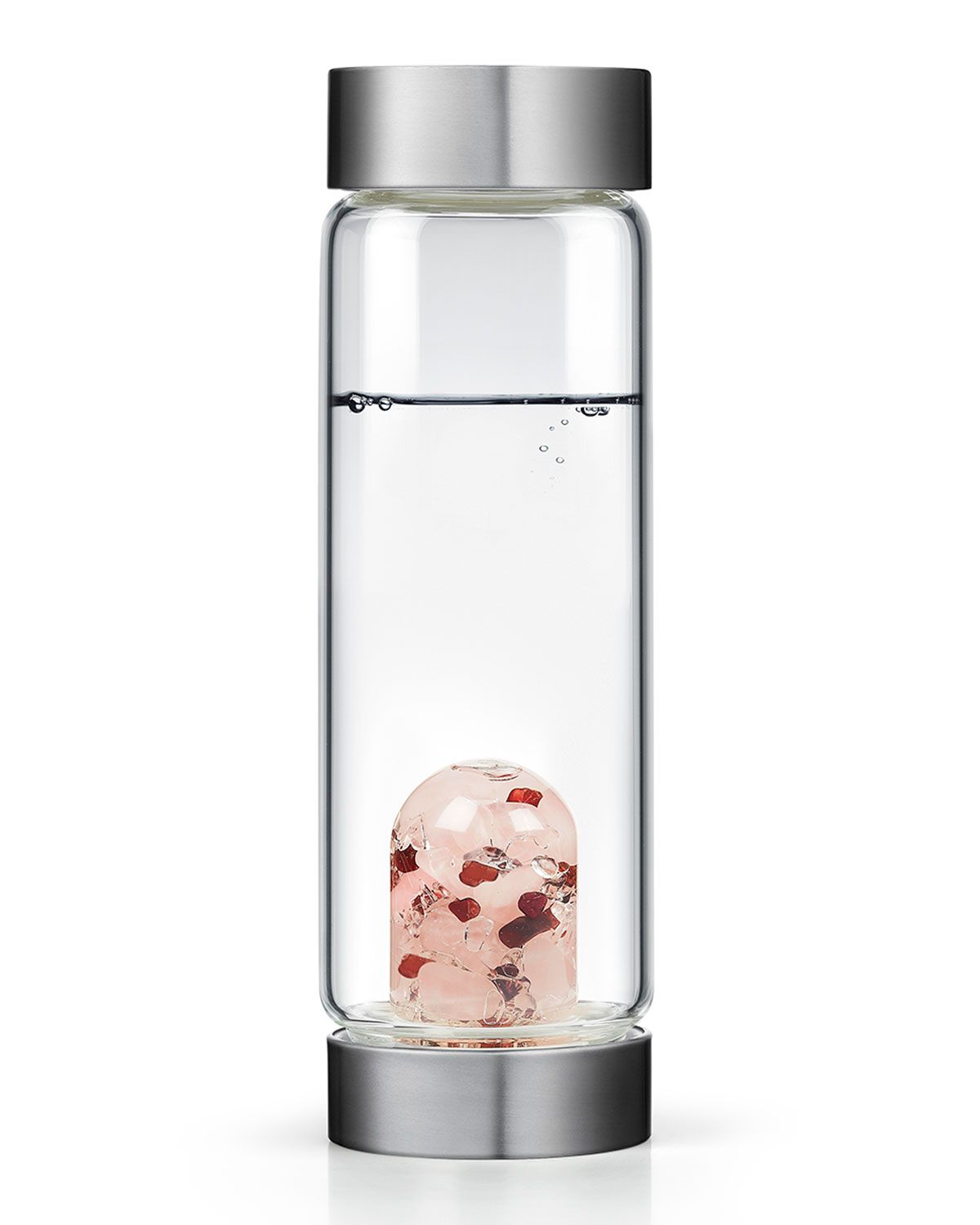 She also has a less expensive recommendation: Purchase a vial of crystals that you can add to a water bottle yourself. “I have patients learn to make their own where they are harnessing the energy of the sun or moon light, their intention, and specific crystals used,” she says. “This is the best way in my opinion. It is also the least toxic, least expensive, and most likely to have the greatest benefit.”

But if you’re going to try the DIY route, she has a few words of guidance: Use stones that are safe, clean, and non-toxic (quartz and carnelian are two of her favorites), and make sure your water bottle is clean and sterilized.

Serious Question: Why Do I Still Feel Dehydrated Even After Guzzling Water?