I Wore Ashley Graham's Favorite Crystal Deodorant—Here Are My Thoughts

Hallie Gould
Hallie Gould is Byrdie's senior editorial director. She has a decade's worth of experience as a writer and editor, and her bylines can be found in such publications as ELLE, Cosmopolitan, and InStyle.
Byrdie's Editorial Guidelines
Medically reviewed by
Dendy Engelman, MD, FACMS, FAAD

As clean, nontoxic beauty continues to break into the mainstream, it was only a matter of time before I started fearing my antiperspirant. For years, rumors circulating the Internet have claimed that active ingredients in your usual drugstore deodorant can lead to breast cancer. While the research is inconclusive, it's naturally a terrifying thought when you’ve been swiping the stuff under your arms since puberty.

"There are no strong epidemiologic studies in the medical literature that link breast cancer risk and antiperspirant use, and very little scientific evidence to support this claim. In fact, a carefully designed epidemiologic study of this issue published in 2002 compared 813 women with breast cancer and 793 women without the disease. The researchers found no link between breast cancer risk and antiperspirant use, deodorant use, or underarm shaving," reports The American Cancer Society.

That being said, I’m not against limiting the number of chemicals I put in and on my body. So when I read about Crystal’s Body Deodorant Stone, I was game to give it a try. Plus, Ashley Graham says the brand's spray version is her favorite.

Best For: Sensitive skin, anyone who wants to avoid aluminum-based deodorants

About the Brand: In 1984, the founder of Crystal traveled to France and learned of a mineral salt product used to purify water—which, he discovered, forms a protective barrier on the skin against odor-causing bacteria, according to the brand. Thus, the idea for the first-ever crystal deodorant was born. 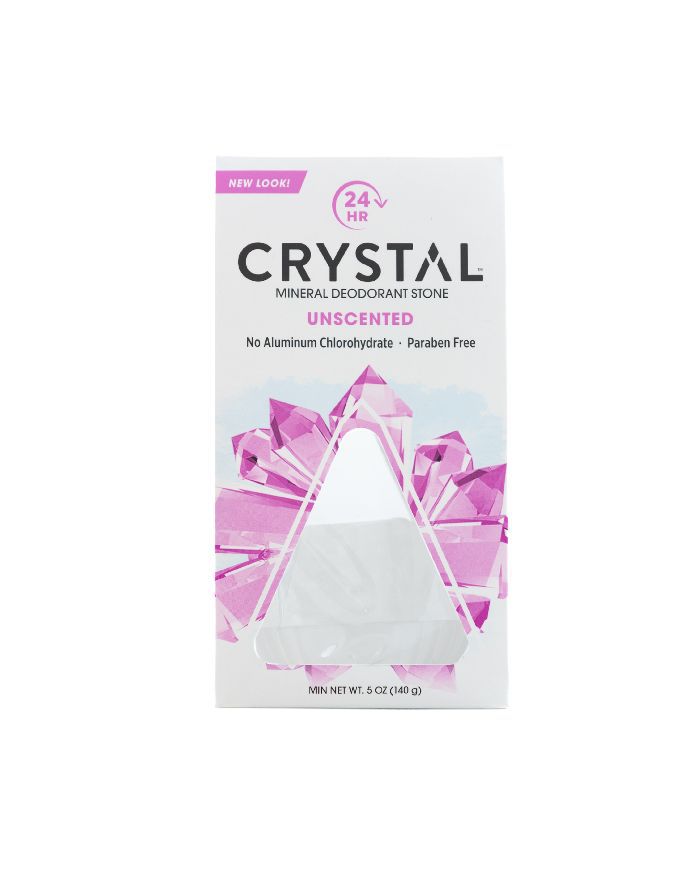 About My Skin: Average underarms

The Crystal deodorant stone offers safe, natural odor protection using only mineral salts and can be used as a gentle alternative to products with aluminum chlorohydrate, aluminum zirconium, phthalates, and parabens. I consider my underarms pretty standard–not overly sensitive or sweaty, but average enough that I was worried about forgoing my usual antiperspirant for a natural deodorant.

The Feel: Silky without a trace of stickiness

The first thing I realized after opening the package? It’s not actually a crystal deodorant but rather a large chunk of mineral salt shaped into a gem-like stone. Still chic though. I moistened the top of the rock and applied it to clean skin after my morning shower each day. The texture was super silky and soft—not at all rough or abrasive like I thought it might be. It didn’t leave my underarms sticky or with chalky, white residue either.

The Results: Rough at first but showed improvement

I went on with my days like any other, sweating through my morning commute and freezing in the office. The first day wasn’t great. I noticed sweat and smells early on in the day which, naturally, was concerning to me while I stood close to coworkers in meetings and on my way to lunch. But our contributing features editor, Amanda, reassured me: “In order to successfully become a natural deodorant user, you have to go through a ‘mainstream deodorant detox,’” she wrote in a piece about just that.

"When people have been using mainstream deodorants and antiperspirants, their bodies are prevented from sweating—ingredients like propylene glycol and aluminum salts stop the natural process of sweat,” explains organic skincare guru Susan Griffin-Black, cofounder of EO Products, an essential oil-focused natural skincare brand. “The first few weeks of using a deodorant without these ingredients [aluminum and preservatives] is often the smelliest time of a person’s life!” says Black. At least I’m not the only one, I thought as I used a makeup wipe under my arms in the office bathroom.

However, much to my surprise, I didn’t notice excessive perspiration or smells come day five—which, in New York in September, is quite the feat. It even felt fun each morning to incorporate the stone into my routine.

The Value: Affordable compared to the competition

At around $8 for 5 ounces, this deodorant is a few dollars pricier than your average drugstore pick, but the larger size means things will probably even out in the long run. It's also on the cheaper side compared to other natural deodorants.

Similar Products: You Have Options

Crystal Mineral Deodorant Stick: For the same formulation and similar price ($7), in an easy-to-use, twist-up stick, this packaging may make for an easier transition from mainstream deodorant.

Lavanila The Healthy Deodorant: This is a luxe natural deodorant that still won't break the bank ($10). It also comes in Sport Luxe ($14) if you need extra strength for working out (or just day-to-day sweating during your commute).

Native Deodorant: Priced at $13, Native is a cult favorite of the natural deodorant world. With a host of incredible scents, plus seasonal additions like Pumpkin Spice Latte, Candy Cane, and Sugar Cookie, there's something for everyone.

Our Verdict: A little sweaty, but worth it

Sure, the Crystal stone deodorant doesn’t work as well as the chemical-laden antiperspirant options, and it won't cut down on your sweat. But to be fair, that’s just the way it is. And you'll probably get more used to it over time (the stone can last for more than a year with daily use). If you’re looking for a natural option, this is absolutely my pick.

Here Are the Best Natural Deodorants to Keep You Odor-free
Article Sources
Byrdie takes every opportunity to use high-quality sources, including peer-reviewed studies, to support the facts within our articles. Read our editorial guidelines to learn more about how we keep our content accurate, reliable and trustworthy.
Featured Video