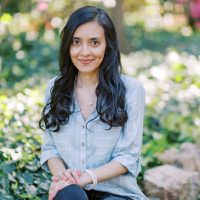 Brina Patel is a behavior therapist-turned-freelance writer. Her writing has appeared in Business Insider, Verywell Mind, and Brown Girl Magazine.

As daughters of a Hindu mother and Jain father, Meg and Komie Vora were raised to value compassion and nonviolence. The sisters’ love of fashion bloomed during childhood trips to India, where they learned about textiles and created designs from used fabrics. As they grew older, they became more aware of not just their dietary habits (having transitioned from lifelong vegetarians to veganism) but also their fashion choices. The turning point came when the duo realized animals were tortured and harmed for leather, wool, and fur. “It just didn’t sit right with us,” they shared. “As lovers of high fashion and luxury items, we started to wonder if it was coming at the price of something else.”

The Vora sisters saw a gap that needed to be filled. While many beauty companies were introducing cruelty-free products, fashion brands lagged behind. They took this as a chance to bring cruelty-free, ethically designed clothing to the market.

In 2013, the Voras launched Delikate Rayne, an environmentally progressive, award-winning vegan fashion and lifestyle company that “paves the way for other kind fashion companies and serves as a voice for the voiceless.”

The brand’s current success and popularity weren’t without its share of struggles. “Our parents, like most traditional parents, weren’t too keen on the idea of us pursuing fashion as a career,” the sisters recall. The duo didn’t have a fashion background or any industry contacts, either. “It felt like we were going to college all over again,” they said. “Not only learning everything from scratch, but having to prove that a creative path is feasible.” The Voras went door-to-door, trying to come across the right factory in downtown LA to work with. They attended textile conventions, enrolled in sewing courses, and visited sample makers to find a designer who could help bring their vision to life.

When the brand launched, vegan fashion was still a novel concept. “Most companies launch with products, paying no mind to a meaningful objective,” the sisters said. This pushed them to be clear about the larger impact they wanted to have, beyond the products themselves. That’s why Delikate Rayne operates on a made-to-order basis, abiding by zero-waste philosophies and a commitment to reducing landfill waste. “Part of our manifesto is to abandon convention, which means unlearning what you have been taught about luxury and challenging the norm,” said the Voras. “We haven't deviated to match whatever trendy narrative is currently at play. We view veganism as a lifestyle, not a fad or marketing tactic.”

The Voras also didn’t want to be a "made by vegans for vegans" company. “We knew vegans would support us based on our company's values, but what about everyone else?” They had to strike a balance between compassion, aesthetics, and purpose. The company focused on attracting consumers to the designs, and then sharing that each purchase would contribute to animal welfare, a lower carbon footprint, and ethical labor practices.

In addition to their designs, Delikate Rayne has launched DR Diary, an online blogzine and Instagram account that educates about sustainable and vegan fashion, food, travel, beauty, and wellness. They’ve also created "The Wardrobe Diet," a method to help people become more mindful of their clothing consumption, and teach them how to create different looks with the items they already own. The Voras are working to bring compassion-focused legislation to the forefront, for issues ranging from increasing vegan options in schools, to policies that shape the future of fashion. Last summer, they campaigned for the Garment Worker Protection Act (Senate Bill 62), which passed at the end of September.

The Voras are clear about their place in the vegan fashion industry. “We don't see other vegan companies as competition,” they shared. “Instead, we view them as more soldiers to help win the battle. We are all fighting for the same cause, which is to take animals out of the fashion equation.”

What America’s First Influencer Thrift Store Is Really Like