What do Kim Kardashian, Ariana Grande, Jennifer Lopez, and me have in common? We might not share an occupation, tax bracket, or zip code, but our hair is united by allegiance to one man: Chris Appleton. As one of Hollywood's most decorated and respected stylists, Appleton is the industry's go-to for everything from avant garde editorial work, sleek and sexy red carpet styles, and commercial and runway looks. He's teased, combed, sprayed and styled some of the most famous women on earth, and now you can join them with the launch of his first namesake product: the Chris Appleton + Color Wow Money Masque ($45). And as the name would suggest, it does indeed leave you looking like a million bucks. 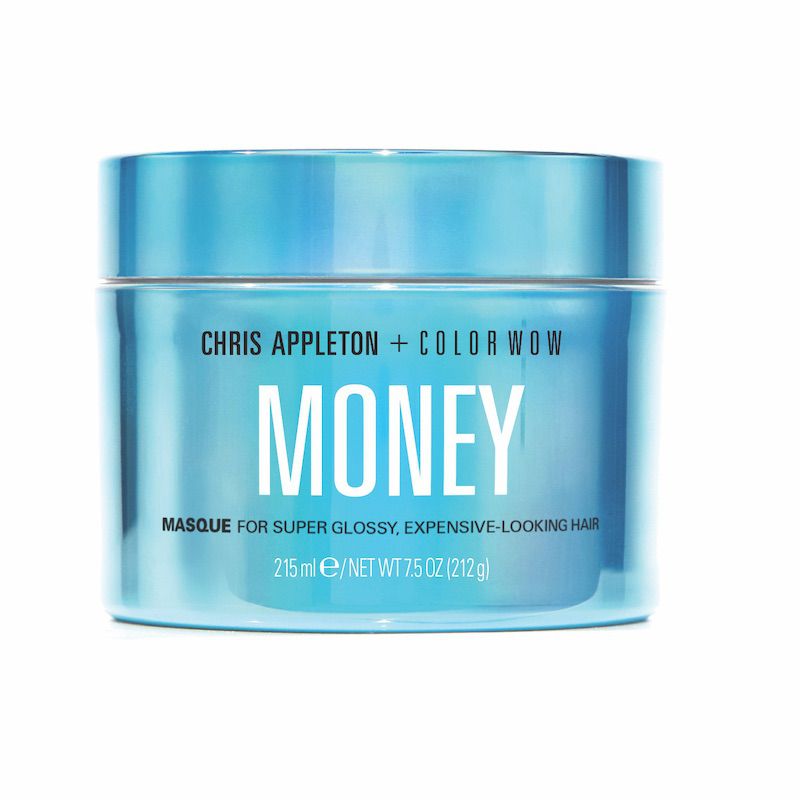 The mask itself is almost a misnomer, but only because it performs so differently from many you may be familiar with. Like most hair masks, the sea-blue Money delivers a reviving wave of moisture, thanks to key ingredients naturally-rich in hydration like Mediterranean Sea Kelp. But unlike the masks already on your shelf, the benefits of this one go far beyond moisture. If you're familiar with Appleton's work (and you already are if you've spent any time on Instagram), you might know that one of his signatures is a high-gloss texture, but getting that gloss without weighing hair down to the point where it can barely hold a curl can be a struggle outside of the salon. Therein lies the greatest feature of the Money Masque: it manages to deliver that silky texture, but turn it virtually weightless. It's in large part thanks to Hydrolyzed Vegetable Protein Complex, which reinforces the hair cuticle to strengthen individual strands with amino acids, but it's also due to what the mask is formulated without. Appleton was adamant about avoiding ingredients he felt were only temporary (or illusory) solutions, like waxes, oils, and polymers.

"I didn't want it to just feel soft," Appleton says. "Yes, I wanted it to feel great when you wash it because that's part of the experience but I also wanted it to actually give the styling part of your hair results. When you blow dry it, for it to have hold and substance and swishing power rather than just being flat to your head and not doing anything."

When you're ready to whip out Money at home, Appleton has a few suggestions on how to best incorporate it into your existing routine for maximum benefit. It's suggested that you use the Money Masque once every three shampoos or roughly once per week. Because it's not especially heavy thanks to the lack of harsh ingredients, the product penetrates hair instantly and Appleton says it only needs to be left on after shampooing for a few minutes and can be adjusted for more or less frequent usage as needed. "It's more of a gel formula," he explains. "I wanted the main results to be when you actually do your hair, when you style your hair so it has substance and life and bounce and swish."

Considering just how buzzy the mask already is (Sally Hershberger herself stopped Appleton during our chat to congratulate him), it's almost a surprise that his eponymous line is just now growing. To him, though, it's all part of the long game for someone who's been in the salon since age 13. Partnering with Color Wow and its founder/CEO Gail Federici was a natural one to Appleton because of her track record for developing celebrated products. Over all, though, Appleton just wants his clients, be them the likes of Dua Lipa or just those picking up this mask, to feel on the money.

"I want it to feel elite but I don't want it to feel unrelatable. What I'm really speaking to is the real woman, I want her to have great hair, I want her to have part of what they see on Instagram or social media," he says, palpably energized. "That's the reason I did this: I did my mom's hair at 9 years old because I loved making her look and feel great. She looked great yeah, but when she felt great? I could see how confident she felt. I think every woman deserves that."

Exclusive: J.Lo’s Hairstylist on the One Product He Says “Literally Transforms” Hair Texture