Yes, she learned them on set.

Bella Cacciatore
Bella has been in editorial for four years, and has been with Byrdie since June 2022. Most recently, she was at Glamour magazine for nearly three years, where she covered all things beauty.
Byrdie's Editorial Guidelines

The first episode of Euphoria's second season set Twitter ablaze. Between Maddy banging on the bathroom door and reactions to Fezco smashing a bottle on Nate's head, my timeline flooded with memes and reactions within seconds of the end credits. But it was newcomer Chloe Cherry who captured the most attention thanks to her performance as Faye; a lovable, ditsy addict who becomes Fez's unlikely partner in crime.

While her performance was pitch perfect—her slurring about not knowing it's New Year's is Emmy-worthy if you ask me—it was her look that had people talking. Her wide eyes perfectly lent themselves to Faye's childlike sense of wonder at the world, and of course, her plump, pillowy lips became instantly iconic.

Which makes her new gig as the face—or lips—of Urban Decay's new Vice Lip Bond ($25), an innovative liquid formula with latex-level shine that lasts all night long—it's the perfect pairing. The lipsticks come in a range of twelve shades ranging from a true nude to deep purple, with raunchy names like "Cuffed Up" and "Safe Word." Per the brand, they are water, sweat, and PDA-proof. as demonstrated in the campaign video shot by cool-girl photographer Alana O’Herlihy.

When I meet Cherry to celebrate the launch, she's decked out in an butt-length braid and the glossiest red lip I've ever seen, courtesy of Lip Bond in "Unbreakable." She looks right at home in the full glam, but according to her, it's a rare occasion, and she's most comfortable in barely any makeup. 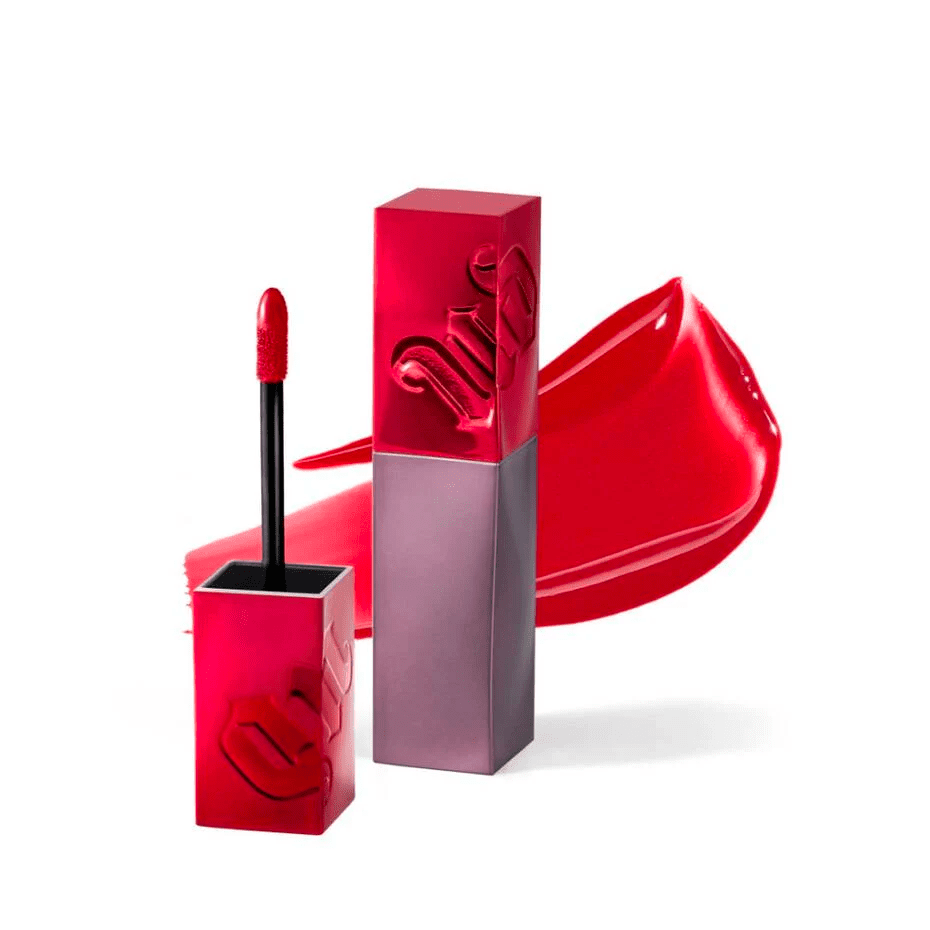 Cherry's mish-mash of styles is what makes her so compelling. She artfully mixes sexy staples like tiny mini skirts and corsets with bright pieces like cheeky slogan tees and candy-colored accessories for a look that's completely her own. The same goes for beauty, where splashes of color and glitter are juxtaposed against flushed youthful skin.

"There was a time, even just probably like five years ago, I tried to be so much more glamorous with my makeup," she tells Byrdie. "I tried to do makeup more like say, like Kim Kardashian would have, you know? Like a lot of different layers, contour, eyeshadow, like every kind of makeup on my face. And I realize now that I just don't look good like that. I can't pull off a lot of makeup. Some people can, but I can't."

While I would gently disagree with her—she was really selling me on the red lip and shimmering shadow—there's something to be said about knowing your look and sticking to it. For Cherry, feeling most like herself means no foundation (she just spot conceals), fluffy brows, and of course, playing up her lips. "My signature lip would be overlying my lips—it's why they are so big—with lip liner, and then I do like a pinky nude."

Considering the obvious Y2K influences on her style, I was surprised to find out she's not really here for the skinny brow revival. "I don't do anything to my eyebrows at all," she says. "Nothing at all, I have never gotten my eyebrows done in my life. I just don't want to mess them up." Instead, she's into a softly fluffed brow and has been eyeing soap brows as a trend to watch. "It just makes people look so healthy. For the first time, we're letting eyebrows just be eyebrows. I feel like it's so good because it just looks like your eyebrows look healthy and grown out, it looks really nice."

Her style references are all over the place, but when it comes to beauty, Cherry credits her Euphoria makeup artist Alex French as her biggest inspiration. "She just has gotten me into this world of makeup, and like what you can do with makeup, and how much it can change your face and how many different kinds of looks you can do. Alex has really opened my mind up with makeup."

French also taught her Cherry one of her all-time favorite beauty tips: The secret to crease-proof concealer. "It's so simple, you just get a good quality under-eye concealer, and then you use a puff, and you just put the puff in the powder and the rub the puff together, and get the powder mixed in and then you just lightly put it underneath both eyes," she says. "It makes it not crease. It's really easy."

While it may take us forever to copy Cherry's effortless cool, at least we can get her beauty secrets down pat.