Listen Up: Charlotte Tilbury's Retoucher Concealer Is So, So Good

This is a love story.

I used to wear makeup every day of my life. When I was in high school, I remember saying something about how I’d rather perish than leave the house without foundation on. Back then, though, makeup was somewhat of a security blanket. After all, if I was forced to face the world as I really was, people would see me for me, blemishes and all. It was a terrifying thought to a 16-year-old kid with spiking hormones and issues with acne.

As I grew older, my dedication to foundation and makeup faltered—whether it was because I was slowly growing more confident, or I was just too lazy to put on foundation every day, I can’t tell. Either way, by the time I was in my mid-20s, makeup became something I saved for things like dates or job interviews.

Of course, it helped that my skin was finally cooperating. I'm by no means suggesting you have to cover your face, regardless of whether or not you have breakouts. That decision is yours. But for me, I wanted to get some coverage while I got to the bottom of why I was breaking out in the first place. 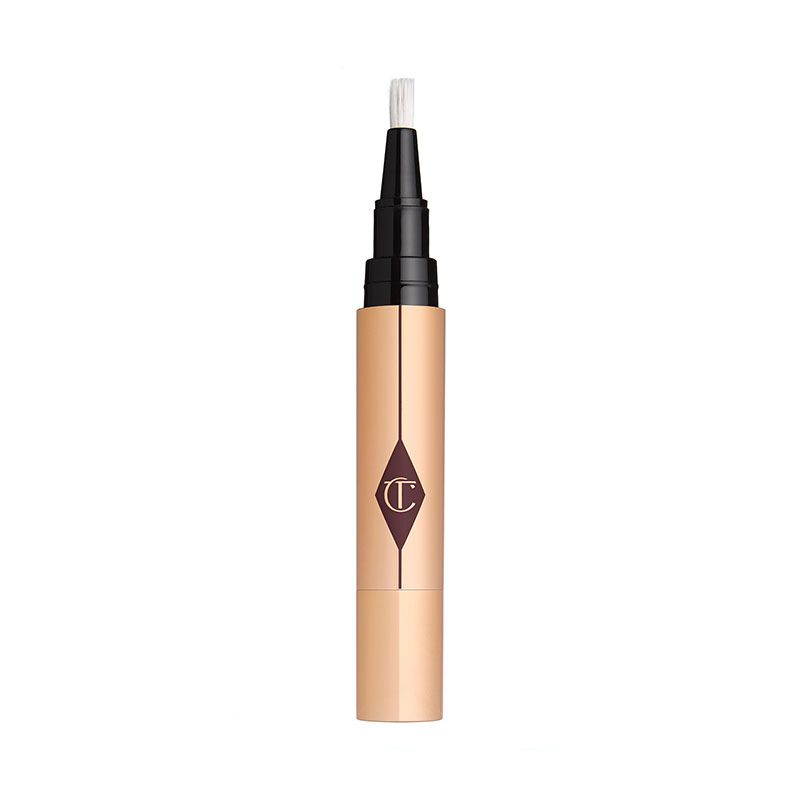 Most of my consistent breakouts had subsided by my early 20s, and by the time I was 26, I hadn’t had a breakout in years. Of course, things change: I’m 28 now, and breakouts are becoming a slightly more regular thing. Though it’s likely due to a mix of stress and hormones, I haven’t been able to pinpoint the exact reason. And so, I’ve felt the need to come up with more of a makeup routine. Honestly, I did feel myself reverting back to my 16-year-old ways, terrified to go outside without hiding my face because god forbid anyone see my acne. (Yes: my therapist did have a field day with this.)

It was in this scramble I found my soulmate, Charlotte. Tilbury, that is. I’d known her before, of course—her K.I.S.S.I.N.G. lipsticks had long been my favorite on the market, particularly the “Bitch Perfect” shade (and not just because of the name). Turns out, at one point in previous years I’d also purchased her Retoucher concealer despite so rarely wearing makeup—and, at the time, I had no idea I’d found the best concealer I was ever going to try. I’m not being dramatic when I say this thing can cover up a government conspiracy if you need it to.

It melted into my skin seamlessly, but remained hydrating enough to not dry out over the blemishes.

It was like angels were singing the first time I put it on my skin. I didn’t bother to apply foundation, and instead painted the concealer over my skin and then blended with my fingers. It melted into my skin seamlessly, but remained hydrating enough to not dry out over the blemishes. And it was buildable, so I could put more on the darker spots and less on the lighter ones if I wanted to. The formula boasts squalane, fermented black tea (which is rich in vitamins), and a compound specifically meant to fill in any skin grooves, while covering bumps and breakouts. It smooths the skin in such a way that my breakouts look virtually invisible.

I’ve been using this concealer for about two months now, and though I’ve been getting blemishes here and there during that time, the Retoucher has not once made anything worse (or left me with clogged pores). Other concealers I’ve tried have done this, so the difference is quite noticeable. Additionally, as someone who has really grown to hate the feeling of having anything on their face—anything more than moisturizer makes me feel uncomfortable—this product is light enough that you don’t notice it.

While getting to the bottom of why I’m suddenly breaking out is a priority, it’s a huge help to know there’s a product out there that helps in the meantime—and that makes my skin look like itself again.

FYI: Check these 10 acne-clearing tips from a dermatologist, herbalist, and acupuncturist.