Charlotte Tilbury's New Highlighter Is Like Flawless Filter in a Powder

With "the most wonderful time of the year" behind us, the winter ahead can feel like a looming grey cloud. The days are shorter and colder, and our complexions get dryer and duller. Besides relying on a glow-enhancing skincare routine, one of the best ways to up the ante on your skin’s dew factor during the chilly days to come is by incorporating a reflective highlighter into your routine. Lucky for everyone, the queen of glow, Charlotte Tilbury, just released the Hollywood Glow Glide Face Architect Highlighter ($48), a pressed powder highlighter that aims to create a Hollywood-like glow—no chunky glitters necessary.

Ahead, everything you need to know about the glowy new launch, and my honest review.

Before pore-blurring Instagram filters and viral glow-enhancing highlighter hacks were a thing, old Hollywood relied on megawatt lights to create a flawless complexion for the big screen. Lighting technician operators were a critical part of makeup routines back in film's heyday, as they were responsible for positioning lighting around actresses' faces in such a way that blurred the skin and created a radiant porcelain finish.

Although makeup magic has come a long way since then, lighting is still one of the best ways to create a bright, flawless complexion (influencers wouldn't be caught dead without a ring light for optimal selfie lighting). Similarly to their viral Hollywood Flawless Filter, the Charlotte Tilbury team wanted to create a product that brings the effects of those old-school lighting tricks to a powder highlighter.

The brand describes the Hollywood Glow Glide Face Architect Highlighter’s effects as a “multi-dimensional megawatt glow”—but what’s the secret? This pressed powder formula contains a proprietary light flex technology that moves with the skin to scatter radiance and create a soft-focus effect, while pressed pearls offer a luminescent quality different from the chunky glitters found in many highlighter formulas.

And although the higlighter is a lightweight pressed powder, Charlotte Tilbury prides itself on creating a formula that mimics the glow-boosting and moisturizing benefits of a liquid highlighter like Flawless Filter. The problem with most powder highlighters is their inability to blend when put up against liquid formulas that melt right into the skin. The Hollywood Glow Glide Face Architect Highlighter, however, contains a hybrid flex gel technology to increase this powder’s blending capabilities while creating an Old Hollywood blurring veil. Moreover, this powder formula also contains emollient ingredients and squalane to hydrate the skin and ensure a patch-free finish.

I was initially shocked by how ordinary this highlighter seems in its compact—it has a shimmery finish that, honestly, looks like any of the other highlighters I currently have in my collection. The key word here, however, is “seems”—upon application, I was convinced that the Hollywood Glow Glide Face Architect Highlighter has the Midas touch, as everything it touched turned to glow.

After using a fan brush to apply this highlighter to the high points of my face (cheekbones, brow bone, nose bridge, and cupid’s bow), I noticed that I didn’t have a sparkly complexion like with other highlighter formulas, but rather a reflective radiance that made my skin look flawless (bye-bye, pores), bright, and dewy, even while I’m battling winter dullness.

It's the kind of highlighter that you can't see straight on, only when the light hits it, making me look lit from within. Additionally, this highlighter was extremely easy to blend into the rest of my makeup and never made me look cakey, even after applying a few layers to my skin. Rest assured, I’m glad to have stumbled upon this highlighter to mimic a sun-kissed glow in the dead of winter. 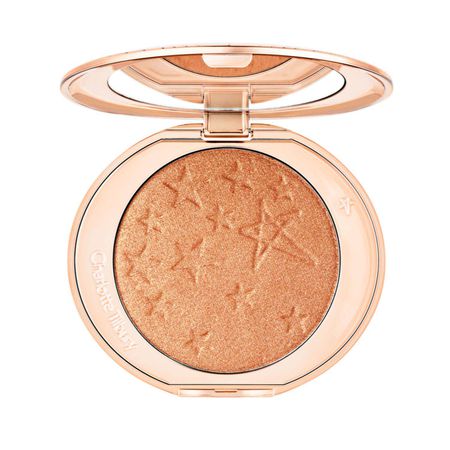