Dermatologists share why it's found in so many products. 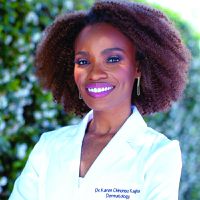 If you actively avoid beauty products that contain drying and sensitizing alcohols, you might feel disappointed (or at the very least, confused) when you pick up a bottle labeled “alcohol-free,” then flip to the back and see “cetearyl alcohol” right there listed under the ingredients. If we were to guess, you've experienced that exact scenario once or twice before, which is what lead you to this article.

We, too, have been baffled by beauty product labels, so we went straight to the experts to demystify the beauty ingredient commonly found in your skincare products. Dermatologists Francesa Fusco, MD and Sejal Shah, MD, FAAD answer all of your biggest questions about cetearyl alcohol below so you're never left wondering about your products again.

Who should use it: In general, anyone who doesn't have an allergy can safely use cetearyl alcohol.

How often can you use it: Daily.

Works well with: Most other emulsifiers.

Don't use with: Cetearyl alcohol is safe to use with most other ingredients, but it can be comedogenic when used in conjunction with ceteareth-20, according to Fusco.

What Is Cetearyl Alcohol?

Cetearyl alcohol is a waxy substance that's derived naturally from plants, like palm oil or coconut oil, but can also be synthesized in a lab. Fusco says theoretically, it could be used in any product that you apply to your skin or hair and is commonly found in creams, lotions, moisturizers, and shampoos. When used in cosmetic products, cetearyl alcohol acts as an emulsifier and stabilizer and prevents products from separating. According to Shah, cetearyl alcohol can also appear on a label under a few different names, for example, C16-18 alcohol or cetostearyl alcohol.

Benefits of Cetearyl Alcohol for Skin

Cetearyl alcohol is not an ingredient that’s used for its actual effects on the skin but more so for the composition and function of the product as a whole, according to Shah.

Although an alcohol by definition, cetearyl alcohol is not the same as the traditional alcohols known for drying and sensitizing the skin.

"In chemistry, things are named by their chemical structure and the elements that make them up," Shah explains. "And automatically, when you have an oxygen and a hydrogen attached together, that makes anything an alcohol. But it’s the other components of it that determine how it’s going to really function." She goes on to explain that in cetearyl alcohol, the alcohol group is attached to a long chain of fats, and that long chain of fats balances it out, makes it less harsh on your skin, and allows it to be more of an emollient.

"Alcohol simply refers to a chemical that has an -OH group on it," Fusco adds. "It doesn’t mean that every alcohol is going to irritate you or strip your skin or be bad for you." In other words, you can finally take a deep breath knowing that you don't have to toss out every product that contains cetearyl alcohol.

Side Effects of Cetearyl Alcohol

Although there have been a limited number of people with allergic contact dermatitis,﻿﻿ the risk for an allergic reaction is small, and both dermatologists say cetearyl alcohol is safe to use in cosmetic products and is overall considered a non-irritating ingredient. "Shampoos, conditioners, face cleansers—you're going to rinse them off, so there's not a whole lot of contact time between these products," Fusco says. "And I haven’t come across anything that indicates that if there’s a significant absorption, that there would be a problem." If you are generally sensitive or prone to skin allergies, Shah recommends using caution, as with any other ingredient.

Because the ingredient is present in so many different types of products, there's no set guideline for its use. And according to both dermatologists, cetearyl alcohol is not an ingredient with a limitation on it in terms of how often it can be used.

FAQ
Is Alcohol in Skincare Bad? We Asked Dermatolgists
Article Sources
Byrdie takes every opportunity to use high-quality sources, including peer-reviewed studies, to support the facts within our articles. Read our editorial guidelines to learn more about how we keep our content accurate, reliable and trustworthy.
Featured Video