The Fascinating, Little-Known History of the Cat-Eye 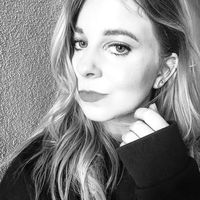 Depending on how even our "wings" are on a given day, the cat-eye is either our favorite makeup look to wear... or the bane of our existence. (That last part may be a bit exaggerated, but fellow cat-eye lovers, we're sure you understand.)

The look is a foolproof way to enhance your eyes, making them appear wider and adding just the right touch of flirtatious allure. No wonder it's been popular for centuries! Believe it or not, winged liner has been making women's eyes look more defined long before Taylor Swift adopted it as her signature.

The cat-eye can trace its origins all the way back to ancient Egypt. After all, no one can forget about Cleopatra’s dramatic cat-eye (the queen used kohl to create her flick). In addition to looking amazing, kohl liner was also thought to protect the eyes from the sun, and to ward off the "evil eye." Elizabeth Taylor donned the look for the movie Cleopatra.

The cat-eye started to re-emerge in this era as one of the staple looks for pin-up girls. Hollywood actresses, like Hedy Lamarr (pictured), also embraced this eye-opening look.

Brigitte Bardot rarely stepped out without her signature cat-eye. Liquid liner was invented in the '50s, making it easy to get a thick, precise line. A smudged lower lash line added an even sultrier vibe.

Bold, graphic liner on both the top and bottom lashes was the '60s interpretation of the cat-eye, as seen here on Sophia Loren. Ira de Furstenberg was also a fan.

When we think of '80s beauty trends, blue eye shadow and crimped hair usually come to mind. But winged liner took on a punk edge in the '80s, steering away from the prim, proper, and precise looks of decades past. Madonna's cat-eye here is a great example.

Here's a little vintage Lauren Conrad for you. The popularity of The Hills put the spotlight on Conrad and her pretty, wearable cat-eye (which she still rocks to this day).

Amy Winehouse was another celebrity who helped make the cat-eye popular again in the early ‘00s. In contrast to Conrad's more feminine take, hers was a little bigger and bolder.

Modern interpretations of the cat-eye occasionally incorporate bright colorful liner, instead of classic black, to make the feline flick.

While we'll still continue to wear classic flicks, we'll also be trying out the newer iterations of the cat-eye that have been all over the runways (see: Nicholas K and Nanette Lepore). Graphic, geometric cat-eyes at the F/W 14 Herve Leger show, pictured, are just one way makeup artists have been reinventing the look.