A Complete Guide to Cartilage Piercings 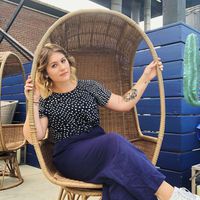 While many people use cartilage piercing to refer to a common piercing style like an industrial or a snug, the term is actually a category of piercing rather than a specific one. Your ear consists of skin covered by cartilage, and any piercing that goes through that cartilage is, well, a cartilage piercing! There are about 10 different kinds of cartilage piercings, each with its own unique placement and look.

Whether you want a classic industrial piercing or are looking to try something more daring like a tragus piercing, here’s what you need to know about cartilage piercings.

The helix is one of the more common types of cartilage piercing and may be what you think of when piercing style is mentioned. A helix piercing is placed on the upper ear and can be done as a stud or a ring. In terms of pain, “Most people report that it usually stings at about a 5 out of 10,” says Michael Johnson, a professional piercer at A Wicked Sensation. “The soreness afterward typically aches for about a week after the piercing is done, [though].” Expect to pay around $35-$50 for a cartilage piercing but keep in mind that the price depends on several factors: your piercer’s experience, the shop’s standards, the jewelry, and more.

While also pierced on the upper ear, a forward helix is placed in a more forward position above the tragus or the small bit of cartilage in front of the ear canal. Forward helix piercings are trickier than typical helix piercings due to having to be lined up correctly with your ear specifically. It’s a good idea to find a very experienced piercer for this style to ensure it turns out exactly as you want.

A forward helix may be about a five or six out of 10 on the pain scale. You can expect it to cost anywhere from $30-$100, and you may even have to pay an additional fee for the jewelry since it has to fit your ear.

Your tragus is the small flap of cartilage directly in front of your ear canal. This spot is a more uncommon choice, but it’s a unique spot if you want a bit of an unexpected piercing.

A tragus is a tricky piercing to perform, though; the process has to be shifted depending on the size and shape of your tragus since it has to work with your ear specifically. Therefore, it’s imperative to find an experienced piercer if you’re interested in a tragus piercing. “The tragus piercing is of the more complex piercings when it comes to the method of the piercing,” says Tylar Burson, a Texas-based professional piercer. “What makes it difficult is getting the correct angle with the needle and the correct depth. There are also methods we take to ensure we don’t pierce any other area around the tragus since it is in a compact area.”

With an experienced piercer, a tragus piercing may be about a 4 to 6 on the pain scale. However, says Johnson, “the popping sound of the cartilage in front of your ear canal tends to make people feel queasy.” Pricewise, a tragus piercing will probably be around $40-$60, though it may be more depending on the studio, piercer, and the piercing itself.

Since an industrial are two piercings, “It can range anywhere between $40-$120, depending on the piercer and what metal they provide for the piercing,” says Burson. Many piercers will include the cost of the jewelry in the price, but be sure to ask your piercer before committing. The pain of this one is only moderate — about a 5-6 out of 10 — but it’s common to feel a bit more pain residually after the actual piercing is finished.

Daith piercings go through the small flap of cartilage directly above the ear canal, close to the middle of the ear. While these piercings look cool, they also serve a medical purpose: daith piercings help with migraines. Since these piercings align with acupuncture points, getting one is like constant pressure on that point, and some people have found migraine relief from it. Another unique aspect of daiths is that, unlike most piercings, a ring — rather than a stud — is suggested during the healing process.

According to Amanda Robone, a piercer at Clear Vision Tattoo, you should expect a cost starting at around $70 for a conch piercing, as you have to factor in a needle fee and cost of jewelry. “It's pricier than the mall, obviously, but it's a night and day difference as far as jewelry quality, healing time, and customer service,” says Robone. “You definitely get what you pay for!”

An anti-tragus piercing sits on the outer edge of the tragus, above the earlobe, rather than the part closest to your head. This is another piercing that is somewhat fitted to your anatomy, as it requires your anti-tragus to be fairly prominent. If it’s not, it will be trickier to pierce, and some piercers may even decline to perform the process if they don’t think they can work with the shape of your ear.

Anti-tragus pain is a bit more intense, often because it’s an unknown feeling, and it’s tricky to pierce. In terms of price, expect a baseline of around $45-$60, though some piercers may charge more, considering an anti-tragus piercing requires a bit more effort.

Rook piercings are vertical piercings that are placed on the cartilage directly above the forward helix. The most important thing to know about rook piercings is that they are generally referred to as one of the most painful ear piercings available, but it’s often not that bad. “The Rook piercing is not too painful; it's like a five on a scale of 10,” says Robone. “Most of my clients tell me it's not nearly as bad as they thought it would be.”

It’s also challenging to pierce in general, so an extremely experienced piercer is recommended for this type of piercing. Expect to pay a bit more because of the experience necessary. A rook piercing will most likely run you around $35-$50, though it also matters on elements like the studio, piercer, and more.

The snug piercing is a horizontal piercing that goes through the inner rim of the cartilage above the anti-tragus. The piercing earns its name from being in a small area that seems to hug the folds of your ears—almost like it's snuggling it. However, only small jewelry like curved barbells (most common) or a small hoop will work for this piercing because of its tight placement.

Expect a cost of between $45-$70. And for pain? Unfortunately, it’s around an eight or nine on the pain scale and is considered one of the most painful.

The orbital is another less common choice of cartilage piercing, though it offers a unique look for those who want something a bit different. This type of piercing is similar to an industrial piercing, as it connects two different piercings. However, an orbital is pierced with a ring rather than a barbell. This gives the piercing the illusion that it’s floating and orbiting the ear, hence its name. Typical piercings that are used for an orbital include helixes, rooks, or inner conches.

A cartilage orbital is considered to be less painful, so around four or five on the pain scale. In terms of price, though, you should expect a much higher number: $45-$60.

The Complete Guide to Getting A Nose Piercing, From Nostril to Nasallang
Featured Video