Clear Your Shelves: Bardi Beauty by Cardi B Is in the Works 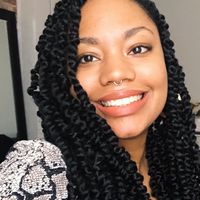 When Cardi B dropped before and after pics from her DIY hair mask last year, we immediately added the ingredients to our grocery list. The rapper’s all-natural concoction of avocado, mayo, and honey and more, yielded results that were well worth waiting in line at Trader Joe’s. She took to Instagram once again to announce that her own haircare line is in the works and explained her inspiration behind the upcoming brand. If that doesn't have you clearing space on your shelves already, it's just been reported that she's filed to trademark "Bardi Beauty".

"This year I will be coming out with a hairline that I [have] been working on at home for my hair and my daughters', however, I think is time for people to educate themselves on nationality, race, and ethnicity." She explained in an instagram caption over a series of screenshots. "Being Hispanic/Latina don’t make your hair long, don’t make your skin light, or don’t make your [facial] features slim, especially Latin countries from the Caribbean islands."

In the Instagram post, the rapper—who is of Dominican and Trinidadian descent and identities as Afro-Latina—shared pictures of her natural hair throughout the years, as well as comments she received about it. Commenters on previous posts made arguments equating her long hair with her Latina heritage and not efforts to keep her hair healthy. The common misconception that Latinx people, "must have the same hair texture, color and features," as Cardi B tweeted, doesn't account for the vast diversity of Latinx cultures.

The narrow definitions in media and confusion over race and ethnicity often exclude Afro-Latinx people, different skin tones, and hair textures. She explained in a series of tweets that she took the time to learn more about the differences between race, nationality, and ethnicity. She also explained she wanted to create a video exploring the diversity of Latinx culture.

While details of the upcoming line are scarce, according to court documents, the trademark for “Bardi Beauty” could potentially mean everything from makeup and fragrance to skincare and haircare. With this news, it sounds like the line could be arriving a lot sooner than we thought. If "Bardi Beauty" is anything like her DIY recipes and her red carpet makeup looks, we're already sold.