It wasn't what I was expecting.

What does space smell like? It seems to be a question that’s top of mind for everyone in fragrance lately. From Eau De Space originally designed by NASA, to the celestial-themed REM by Ariana Grande, everyone seems to be curious about exactly what the smell of outer space might be.

Most recently, Byredo and Travis Scott teased the world with their offering of exactly what scents might be waiting for us in the cosmos with the surprise drop of TRAVX SPACE RAGE, which asks, “Wonder what space smells like?”

And we DO, but this candle may not be the one to tell us flat out. Instead of listing the specific notes like you’ll typically find when shopping for fragrance, it piques our interest by listing what the scent was inspired by rather than what it’s literally made up of.

Middle: Starlight, the scent of supernova

I mean…sure. I don’t know. I don’t even mind that they’re having a little bit of fun with the product descriptors because there are a few things that already set this product from what Byredo usually does.

For starters, collabs are rare. Their scent (my favorite) 1996 was inspired by a Inez & Vinoodh photograph that also happens to be emblazoned on the box. Not a true collaboration, maybe, but someone else’s artistry served as the inspiration for Byredo’s.

Next, the Space Rage components are a beautiful ombré of blue and purple. While colored glass is not unheard of for Byredo, as seen in another collab with Oliver Peoples, this is the first time we’re seeing an ombré. Also, the custom lettering that looks almost etched into the glass is a departure from the typical clean Byredo typeface signaling that this release is unlike anything they’ve ever done before.

Finally, and maybe most obvious, the nature of this collab. The brand has never worked with someone so relevant as Travis Scott, literally at the top of his game, and treated it as such an exclusive drop. The first release sold out instantly, but this time, you may just have a chance to snag it (and smell it) for yourself. 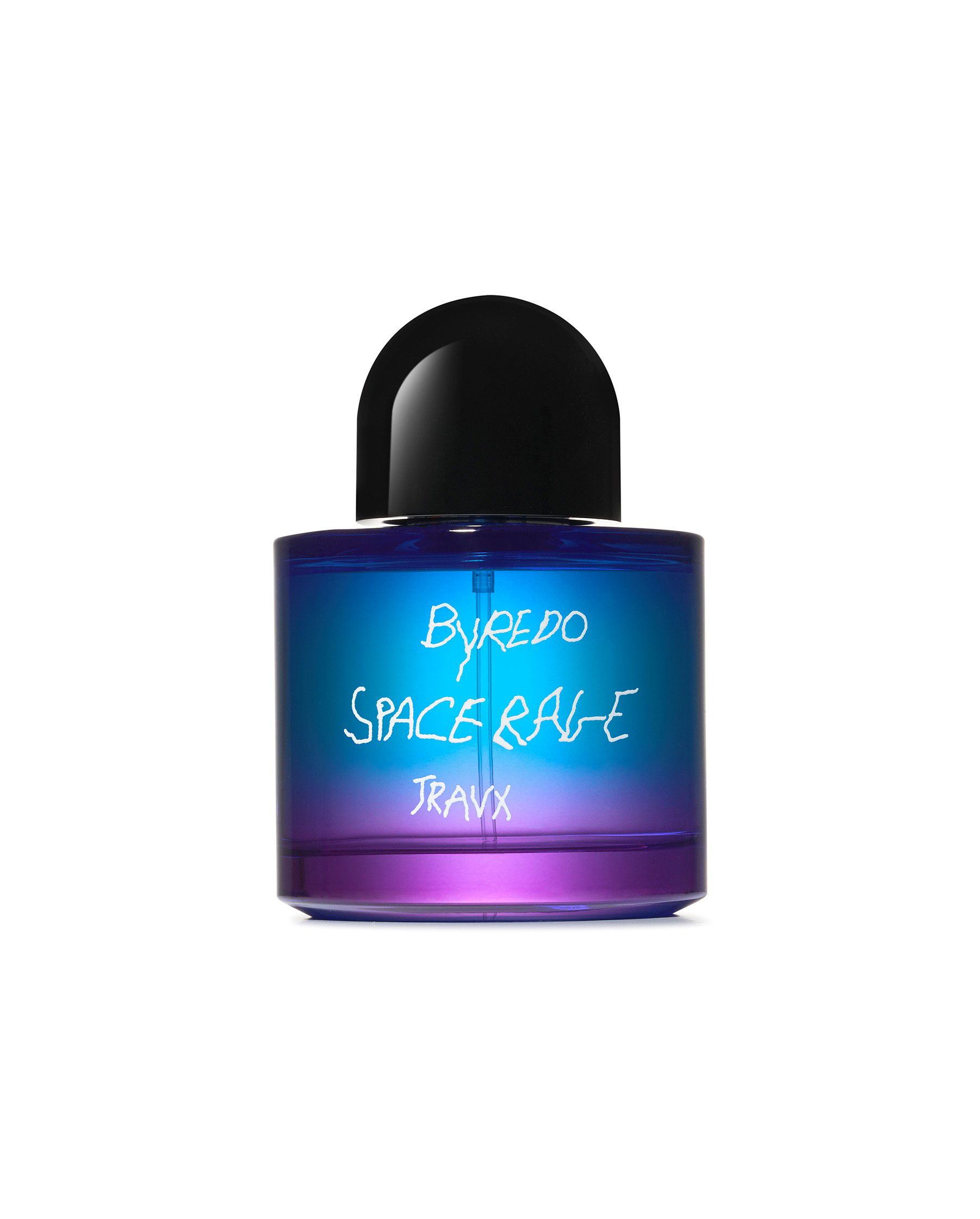 First off, I thought this scent was going to be some sort of iteration of the Iso E Super molecule, or a skin scent. Or even more predictably, a scent built around ozone, or the accord meant to smell like clouds and rain and electricity. Or at the very least, pepper and dry woods. Wouldn’t any of that make sense? I mean, what were YOU expecting?

I am shocked and very pleasantly surprised to report that space, at least to Byredo and Travis Scott, smells very bright and fruity.

Byredo does fruit unlike anyone else. Instead of being sweet and juicy, like the citrus or red berries that we see in many scents, they bring to life the texture and nectar and meat of the fruit. Think peaches and plums late in summer, so sweet and tangy that they make the back of your mouth ache.

One of my favorite Byredo scents is Pulp, an intense, sticky maceration of summer fruits that is absolutely astonishing. Space Rage is not unlike Pulp in very, very good ways. It is almost, dare I say it, more forward and sweeter that Pulp.

As far as my nose goes, this is what I get from the candle: Peaches and raspberries at their most ripe, bordering on bruised. The scent is juicy and passionate, almost unruly in its tang, so sweet it could ferment and turn to wine at any time. There is a bit of earthiness, too, that doesn’t so much as balance it but does work to give your nose something else to grab onto. Past all of the fruit, you will detect wood, weed, and perhaps patchouli, enough green and herbaceous notes to keep the candle burning for a little longer.

Space rage is so much more fun than I was expecting. It is truly a surprise and though it is a little in your face, you never tire of it, nor does it ever become too much. Byredo scents, whether fine fragrances or candles, have a way of being just enough, never overpowering the wearer, always leaving you wanting just a little bit more.

This, to me, is like the olfactive version of those galaxy lights that people are using right now, the ones where you flip them on and they turn your whole room blue and purple and pink, like your very own galaxy. The scent was the most surprising fragrance release I’ve seen in a while, and while it wasn’t what I was anticipating, I have to admit the scent is (forgive me) out of this world.