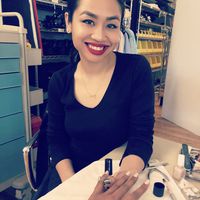 Ragged and brittle nails are the reality for many who suffer from an all-too-common habit: nail-biting. The truth is, bitten nails are a common problem and one we'd all like to rectify if we had some expert advice.

One way to make bitten nails stronger? Fake nails, which act as something of a shield while your real nails grow and strengthen. Even better for those of us with a habit of constantly biting our nails, fake nails may offer a way to avoid and, well, break the practice entirely.

For more about how to combat the dreaded after-effects of nail-biting (and to learn why we all bite our nails in the first place), we turned to a few experts.

• Vivian Diller, PhD, is a psychologist based in New York City.

• Christina Grant is a manicurist and nail model.

Read on to learn if fake nails can help stop your nail-biting habit once and for all.

Why Do We Bite Our Nails?

More often than not, nail-biting is a symptom of stress or anxiety and a habit that affects nearly everyone at some point in their lives. But for some, it can be more severe than others.

"It’s a type of body-focused repetitive behavior," says Dr. Sanam Hafeez. "There’s a range of nail-biting. It can span from an occasional behavior to a self-mutilative behavior."

While it can become a lifelong habit for some, for most, it's a habit that's easy to outgrow.

"For most, it's a way to release tension and provide soothing, similar to how children are soothed by sucking their thumbs. Hand to mouth behavior [is] an outgrowth of the desire for oral satisfaction, with nursing being the earliest form. Some women play with their hair for similar soothing results," says Vivian Diller, PhD.

Fake nails not only hide your own bitten nails, but they make it increasingly difficult to bite, acting as something of a (literal) mask over the problem.

"Like with any habit, substituting it with another activity or changing the behavior can help break the cycle. When women wear fake nails, it creates a temporary interference with nail-biting behavior," says Diller.

Despite the temptation to have long, luxurious digits, it is best to start off having very short nails—probably just to the ends of your fingertips. A long nail extension adds weight and may even tear the underlying and especially weak nail away from the bed, potentially causing long-term damage.

How Long to Wear Fake Nails to Stop Nail Biting

Generally speaking, it's best not to wear any particular set of nails for longer than three or four weeks. "I think getting a new set repeatedly can help with biting, and one can see an improvement on their natural nail within a month if they’re taking care of the nails underneath the fake nails," Grant says.

It can take the natural nail up to six months to grow from the cuticle (the bit nearest your hand) to the tip of your finger. During that time, you will have to have what are known as "fill-ins" to cover the gap at the base of your nail when the growth begins. Initially, it will be quite rapid, so expect to have your first fill in within about two weeks of the set of nails being put on. After that, it will slow down a little bit. When the nails come off, use a strengthener like OPI Natural Nail Strengthener ($11) and make sure to file them regularly to maintain shape.

As Diller explains, waiting for the natural nail to grow beneath the fake nails is the best way to ensure you break your nail-biting habit. "It usually takes about 90 days to change most habits (and keep the new one), but it depends on how long-standing the habit is," adds Diller.

Choose fake nails in a bright color, like red or orange, as an added alert to not bite your nails.

When and How to Remove Fake Nails

If you decide that nail tips are not for you, or if you are ready to have them removed to reveal your natural nails, make sure that the job is done professionally. If you try to do it yourself, all of your hard work will likely be undone because the nail underneath will be particularly soft and could tear off. This will take some time to heal, as nails need to grow out to become longer and healthier.

According to Grant, how you remove a fake nail depends on what type of nail it is. Here's the down-low on removing the most frequently-used types of nails.

How to Care For Your Natural Nails

Keeping your nails healthy will help to manage a nail-biting habit. "If you trim your nails or get a manicure and keep the cuticles moisturized, it might be less tempting to pick/bite, and you might even begin to take pride in their appearance as opposed to trying to hide them," says Hafeez.

Also key to healthy nails: moisture. "Cuticle oil is key here. Moisturized cuticles are destined to grow," says Grant. "If it’s hard for you to keep up with them during the day, always put cuticle oil or balm on them before you go to sleep," Grant says. She also suggests pushing back your cuticles. "Regularly pushing back (no cutting!) your cuticles back also helps make room for new nail growth."

Hopefully, by the time your natural nails are a reasonable length, you will have been cured of the nail-biting habit.

Be patient and be prepared to use lots of nail strengthening products to assist your nails in the process, even after your fake nails are off.

"I do think a couple of good gel manicures or whatever your preference of fake nail is can make an improvement on the urge to bite," says Grant.

How to Give Yourself the Perfect At-Home Manicure
Article Sources
Byrdie takes every opportunity to use high-quality sources, including peer-reviewed studies, to support the facts within our articles. Read our editorial guidelines to learn more about how we keep our content accurate, reliable and trustworthy.
Featured Video