"Body positivity is not enough." 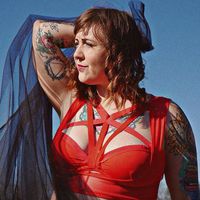 You've likely heard of body positivity. Just love your body as it is! It's easy to say when the person speaking is a thin, white woman. Although I'm white, I'm also plus-sized and non-binary. As a former body image coach, I aimed to get my clients to focus on body liberation instead of body positivity. I'd teach them to be free from social and political oppressive ideas that certain bodies are more worthy than others. Of course, in a world filled to the brim with diet culture, thin bodies are worshiped, and fat bodies scrutinized.

So why does this matter so much? Because there's a lot at stake.

Unattainable body standards, oppression, and diet culture are all causes of eating disorders. Body liberation may not solve the issue entirely, but it offers another avenue. What if you could live in your body as it is, at any size, but especially as a marginalized body, despite living in a world that may not feel the same? This is the dream of body liberation.

I coached women on how to live unapologetically in their bodies. I helped them dismantle fatphobic ideas like their weight being tied to their health and, therefore, their worth. I adored it. The only reason I quit was to work on my book.

Body positivity is not enough.

While coaching, I learned a valuable lesson: body positivity is not enough. The work continues. Liberation is living in the world without constantly thinking about your body and knowing you're enough just as you are, even if others don't see it that way. It recognizes how much diet culture has harmed us and helps us know that, while we can't fix it overnight, we can be the change we want to see.

One of my favorite Black fat activists is Jessamyn Stanley, and here's her take on body liberation from her interview with Greatist: "Instead of fixating on your physical body, you can just pursue and enjoy and create and do and be." My life became fuller when I stopped focusing so much on my body, and I began to think about my hobbies and dreams rather than if my thighs were touching and what people thought of that.

It might look different for each individual, but here are some ways it can manifest:

So how can you take steps toward practicing body liberation? I would tell my clients to start on their social media feeds by diversifying the bodies they're seeing. Make sure you're connecting with people and consuming content of people with bodies of all sizes, genders, and people of the gender spectrum, colors, abilities, and sexual orientation. The more bodies you see that look different from yours, the more comfortable you'll be with the idea that diversity exists.

The second thing I recommended was to get involved with a community. This could be as simple as engaging with others on Instagram or finding a community such as Fat Girls Hiking. Whatever it looks like, find your people. While it's important to see people who don't look like you, finding others who do look like you is important, especially if you're in a marginalized body.

I recommend diving into literature, podcasts, blogs, and available media that will teach you about body liberation. For books, check out The Body Is Not an Apology by Sonya Renee Taylor, Shrill: Notes from a Loud Woman by Lindy West, and Every Body Yoga by Jessamyn Stanley. Some podcasts I recommend are "She's All Fat" and "Fat Girls Club."

The last thing I'll say is to keep on keeping on. There's a lot of fatphobia in the world, and fat folks are the brunt of most jokes. People comment when weight is gained or lost, and folks tie their worth up to the number on the scale. God knows I've spent many hours fretting about these things, but I keep fighting.

We're fighting many battles, but the change really begins within us, and experiencing body liberation, in the end, is worth the fight.

7 Women on How Chronic Illness Changed Their Relationship With Their Bodies
Article Sources
Byrdie takes every opportunity to use high-quality sources, including peer-reviewed studies, to support the facts within our articles. Read our editorial guidelines to learn more about how we keep our content accurate, reliable and trustworthy.
Featured Video