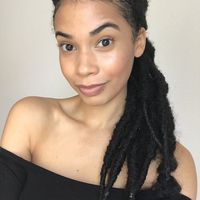 Celeste Polanco
Celeste Polanco is a digital creator and freelance writer. Her work has been featured in InStyle Magazine, XoNecole, and now Byrdie.
Byrdie's Editorial Guidelines

Buy On Amazon Buy On Bobbibrowncosmetics.com
In This Article

We put the Bobbi Brown Vitamin Enriched Face Base to the test after receiving a complimentary sample from the brand. Keep reading for our full product review.

If I'm going to be totally honest, I have to admit I never understood the point of a primer. I knew the general meaning is to prep skin before makeup, but isn’t that what skincare is for? After toning, moisturizing, serums, and applying sunscreen, you would think the skin is primed enough. Yet still, there’s primer. For a long time, I wondered if it was really "priming" or if the beauty industry was just priming us into an item we don't need.

All that said, I do use primer as part of my makeup routine. I know; this is very contradicting. How can I question something but still buy it? Well, I just do. I have often felt like I’m only applying my primer because that's what I've heard is the right way to prep for makeup. It's kind of like saying “bless you” when someone sneezes. No one knows why they’re saying it—they’re doing it because, well, that’s just what you do.

Every time I use a primer, I feel like I’m applying extra moisturizer on my face, and find myself wishing I could just accomplish both in one step. Well, it seems that at least one brand is listening to those who feel the way I do and creating a workable solution. Bobbi Brown’s Vitamin Enriched Face Base is an all-in-one primer and moisturizer, with a rich, creamy texture that hydrates the skin before makeup without feeling heavy. So did this multi-tasking product change my long-held opinion on primer? Keep reading to find out.

Uses: A daily primer and moisturizer for the face.

About the brand: Makeup artist Bobbi Brown founded her eponymous cosmetic company in 1991. The makeup line originally started with ten simple lipsticks, and it quickly turned into an empire. Brown is now an entrepreneur and best-selling author.

About My Skin: Dehydrated

I stick to more hydrating primers due to how dry my skin can be. I also have had times when a primer didn’t work out, and my makeup would become patchy on my skin. I prefer long-lasting, hydrating primers, usually with more of a liquid or creamy consistency, to ensure my makeup will have a smooth finish throughout the day. I find these formulas tend to work best with my skin.

Bobbi Brown's Vitamin Enriched Face Base is jam-packed with ingredients that create a rich, creamy texture. It starts with butylene glycol, which adds a smooth layer to the skin for a more improved appearance. Squalane is a follow-up ingredient that seeps into pores and rejuvenates skin at a core level. Finally, beta-carotene is an antioxidant that supports skin health. You'll also find shea butter and vitamins B, C, and E, which combine to hydrate and nourish all day underneath makeup, an effect that gets better over time.

Thanks to all the nourishing powerhouses in this product, it definitely appears that your skin will be getting more than what it needs. The only ingredient that may be concerning is the high concentration of grapefruit, which may come off strong and could irritate sensitive skin. The product isn’t infused with artificial fragrance, but those who avoid it due to irritation may want to patch-test or steer clear.

The Results: Plump and ready for anything

Before applying Bobbi Brown's Vitamin Enriched Face Base, I went through my skincare routine, except this time, I decided to skip the moisturizer. The product claims to be both a moisturizer and a primer, so I figured it would be safe to use it as directed. When I applied the multi-base primer, it immediately melted into my skin, leaving it with a beautiful, plump glow. The texture of my skin felt soft and a bit tacky, ready to receive my foundation.

The primer sat beautifully under my makeup, helping my glow to shine through and eliminating any cakey appearance. At first, I was a bit concerned about the tacky texture of my skin due to the primer, but as I continued with my makeup routine, I quickly noticed how the sticky texture boosted how well the makeup sat on my skin. Throughout the day, I saw the primer added to the longevity of my makeup. I loved how the formula didn’t allow my makeup to look too greasy and gave me a more dewy appearance instead. Finally, I could see the magic of primer, as I had found a multi-tasking product that could hold throughout the day.

The Value: Not the most affordable, but could be worth it

The Bobbi Brown Vitamin Enriched Face Base primer is $62 for a 1.7-oz. jar, so it's not exactly a budget find. However, for those looking to invest, I believe it is more than worthy. The ingredients in this product are phenomenal, the product moisturizes and primes in one step, and the long-lasting results are hard to beat.  Also, a little bit goes a long way with this product, so it will last you a significant amount of time.

L’Oreal Paris Magic Perfecting Base: If a drugstore dupe for the Bobbi Brown Vitamin Enriched Face Base is what you're after, this primer by L'Oréal ($13) is an excellent option. The product is meant to provide a smooth, matte finish as opposed to a dewy glow, and you can wear it either on its own or as a primer under makeup.

Milk Makeup Hydro Grip Primer: This primer from Milk ($32) is a cult-favorite, and for good reason. The ingredient list says it all: Hydro Grip contains hyaluronic acid, aloe water, niacinamide, and cherry to provide moisturizing, calming, and antioxidant benefits. It's recommended for most skin types, and the gentler ingredients make this a good option for anyone whose skin may not tolerate the citrus in Bobbi Brown's moisturizing primer.

I really mean it when I say I love Bobbi Brown's Vitamin Enriched Face Base. I am so happy I found a two-in-one primer and moisturizer that does wonders for my skin. It may be on the higher end price-wise, but the hydrating and antioxidant benefits are something you just don't get in a lot of traditional primers. Investing in this primer means you’re providing your skin with the ingredients it needs, and you can’t put a price on that. After years of going through the motions and not knowing if primers were really helping my skin, I'm thrilled to have found an option that simplifies my routine while giving my skin the extra glow boost it's been craving.