This Skincare Palette Offers Up Glowy Skin on the Go

I don't know about you, but when it gets to 3 p.m. and I look in the mirror to discover my face has hoovered up half my makeup and my skin has started to look flaky, it isn't extra makeup I want to put on. I don't feel like patting on extra powder, nor do I wish to smear on another layer of foundation. Ideally, what I think my skin is crying out for is skincare—but am I about to start stuffing my teeny & Other Stories crossbody bag with jars of moisturiser and glass bottles of face oil? No. No, I am not. Luckily now there's a better option—Bobbi Brown's Extra Glow Skincare Palette (£34), and it's about to change your life. 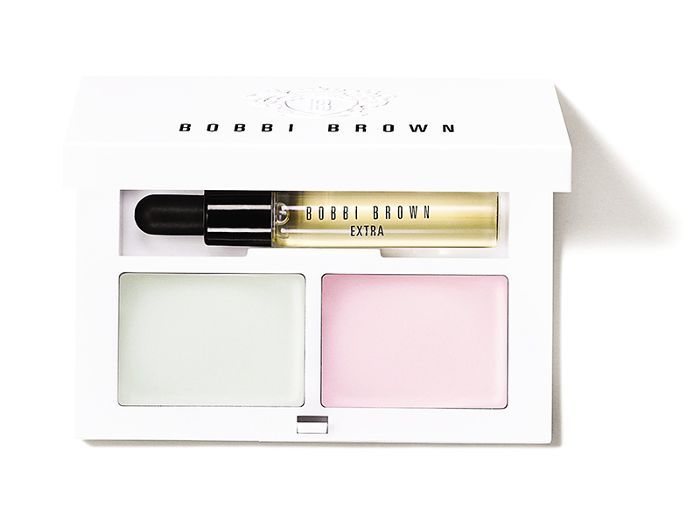 I know what you're thinking because I'm thinking it too: Skincare. In a palette?! How genius. And genius it is. Inside, there are two solid balms ready to get skin back into check. If you've fallen victim to this mega-flu that's going round, the Extra Soothing Balm contains rosemary and geranium that will cosset any red skin that has appeared around the nose. Ashley Griffiths, Bobbi Brown's regional education manager, also recommends using it on chapped lips and layering it over blush to give skin a natural glow.

The minty-green Skin Salve acts as an extra buffer between your face and this harsh cold weather, so I like to pat this on to cheeks before heading out to grab my lunch from Leon. It's also brilliant at nourishing dry patches that appear mid-afternoon and at hydrating the under-eye area, and that's all down to the mixture of shea butter and carrot extract. Griffiths also shared the best tip to cover any spots that rear their ugly head: "Apply a fine layer underneath concealer to smooth over the surface of the blemish so the concealer on top looks seamless."

Finally, the palette includes the cutest vial of the brand's Extra Face Oil, which is full of skin nourishers like vitamin E, sesame oil, sweet almond oil and jojoba oil. You might not think you're ready to start applying face oil during the day, but pat a couple of drops on the forehead and over the cheeks, and I swear people will beg you to tell them what miraculous foundation you're wearing. In fact, I've started to use it in lieu of highlighter—it's that heavenly.