Erin Jahns
Erin Jahns is a hair, makeup, and nails expert and beauty editor with over five years of experience in the industry. She is currently the senior beauty editor at WhoWhatWear.
Byrdie's Editorial Guidelines
Medically reviewed by
Sunitha Posina, MD

Medically reviewed by Sunitha Posina, MD
Sunitha Posina, MD is a board-certified physician in internal medicine based in New York. After completing her medical training in India, she completed her post-graduate training in Internal Medicine at Stony Brook University Hospital in New York.
ABOUT BYRDIE'S BEAUTY & WELLNESS BOARD
Board-certified physician in Internal Medicine

How They Work The Benefits
The Drawbacks Our Experience

I don't know about you, but almost every second of my waking hours is spent in front of some kind of screen. And when you factor in that I only sleep five or six hours per night, well, that's an alarming statistic. The moment I wake up, I grab my phone to scroll through Instagram and check texts and emails, a pattern that continues while I get ready, sip my coffee, and eat breakfast. Honestly, the only time I'm 100% not on my phone is during my morning and evening commutes. Thank heavens for L.A. traffic, huh? (See, fellow Angelenos: There's always a silver lining if you look hard enough.)

Since I don't live under a rock, I'm aware that this isn't a healthy practice. I know I should unplug once I make it home and collapse into bed. Read a book, perhaps? Call a friend? Take a bath? All lovely ideas, but my nightcap of choice is usually more IG scrolling, catching up on the internet reads I missed during the day (that work hustle, though), and a hearty helping of Netflix. Oh, and sometimes I just continue to work in front of my laptop into the wee hours of the night.

Given all this screen time (hello, sleep-disrupting blue light), it's not a huge surprise that I have a tumultuous relationship with sleep. A) I sometimes have a hard time falling asleep to begin with. B) I periodically wake up during the night. And C) I wake up early—even on the weekends when my unnecessary alarm clock has been silenced. Now, I will say that I had weird sleep patterns even before my life was pretty much dictated by the blue light coming from my collection of screens. But that certainly hasn't helped. Thus, enter my new unexpected saving grace: a pair of brilliantly designed blue light–cutting specs from The Book Club. Curious to find out how something as seemingly superficial as an Instagrammable pair of glasses has made over my approach to bedtime? Keep scrolling to learn about blue light–blocking glasses—and whether they might work for you too.

It's no secret that our addiction to screens has spurred quite the recent outbreak of research into their impact on our circadian rhythm, eye health, and even our emotions and happiness. And while any light at night can potentially have a negative impact on our health (it interferes with the body's natural production of melatonin), it's the blue light wavelengths, in particular, that science says we should be wariest of. Which, you guessed it, forcefully flow out of our phones, laptops, and tablets.

And that is where The Book Club comes in (cue the angels singing "Hallelujah"). According to the brand's website, if you (like me and 83 percent of all other Americans) are exposed to two or more hours of blue light per day, you're simultaneously becoming more susceptible to eyestrain, headaches, and sleep disruption. (Migraines are another common symptom.) Think of blue light glasses as being sort of like sunglasses, but instead of protecting your eyes from the sun, they protect you from too much blue light.

With the brand's specially designed glasses sitting on your nose, your exposure to blue light is strategically slashed by 30 percent. While 30 percent might not seem that astronomical, it is when you think about the accumulative, positive impact that percentage can have long-term. I don't see our screen time dwindling anytime soon—do you?

"As an optometrist, my interest is focused on violet-blue light and how it can affect long-term eye health potentially disrupting my patients’ day-to-day functions," says Natalie Chai. She brings up a 2018 study from the International Journal of Ophthalmology stating that short-wave blue light between 415 and 455 nm is the most harmful. "This particular wavelength seems to be absorbed greater and deeper into the layers of the eye, causing the highest amount of oxidative tissue stress," she concludes.

Chai touches on another 2018 study that found that using blue-blocking filters can significantly decrease the damage constant blue light could have on retinas and their cells. If wearing blue light glasses is all it takes to keep our peepers healthy for the long haul, we're here for it.

Scrolling through social media late at night? That might cost you some zzz's. "Blue light slows the production of melatonin, the hormone that helps us sleep," says behavioral optometrist Juanita Collier. "The more blue light we take in later in the day, the less productive our sleep is, and it is usually for a shorter duration."

Try to make a plan to reduce or eliminate the amount of time you spend in front of a screen in the evenings. "While I know this may not be realistic for everyone, you will experience a significant change in sleep and energy level by putting your phone away after dinner," Collier suggests. "Dim the lights and snuggle up by a fireplace (which emits minimal blue light) with a cup of chamomile tea," she adds. "Your body will thank you."

The protection of blue light glasses doesn't work if you don't step away from your blue light–emitting electronics every once in a while. "These glasses will not prevent the effects of prolonged near work [short-working-distance activities], without taking a break, on the muscles of the visual system," comments Collier. "Staring at a screen, blue blockers or not, isn’t good for your eyes due to eyestrain, so breaks are very necessary."

Collier recommends following the 20-20-20 rule. "After every 20 minutes of near work, look 20 feet away for 20 seconds, then you can get right back to work," she says.

We need further proof that our purchase of blue light glasses does more than boost our style. "There is no conclusive research that definitively proves that it truly helps, and animal studies used does not replicate a human’s general exposure to blue light," states Chai. "Many studies used mice, and these animals were blasted with direct high-energy blue light for long time periods. The results are suggestive at best and not transferrable to the human biological tissue 100 percent."

Some Blue Light Isn't That Bad

There's a lot of chat about blue light being harmful, but in reality it has the potential to be beneficial. "It has been getting a bad rap in society recently, but remember that blue light is found naturally in sunlight and is important for us during the day," says Chai. "Blue light exposure (in moderation) with sun protection has been shown to have a protective effect in delaying the onset of nearsightedness in children."

The glasses I was sent from The Book Club are ridiculously cute, and it took roughly two minutes for me to slap them on after unboxing them. I knew that blue light–blocking glasses from some other brands have reputations for noticeably skewing the tinge of your eyesight (so it appears warmer versus cooler, hence "blue-blocking"), so I was immediately delighted when I realized everything looked pretty much the same. No weird tinges in sight. Plus, while the lenses do have a bit of a reflective blue tint externally, it's super subtle and probably not noticeable to an outside observer. Therefore, when you're wearing them out in public or at work (which I totally have), you don't have to feel like you need to explain yourself.

In general, I've been trying to wear my blue light–blocking glasses during that aforementioned two- to three-hour span when I'm looking at some kind of screen before bed—be it my laptop or my phone. And interestingly, starting on my very first night of wear, I noticed my eyes felt heavy sooner than they typically do. Even though I still felt wired from my day as I went through my skincare routine just a half hour or so before, soon after, I was already set to tap out for the night. Bizarre, considering I usually struggle to force myself to turn the lights out at night (despite my self-inflicted early-morning wakeup call).

As it turns out, this wasn't a one-time fluke. Every night I wear my glasses (and I've been getting better at being more consistent), falling asleep comes easier, and I also have a harder, deeper sleep. I've also been trying to wear the blue light–blocking glasses during the day, since they help relieve eyestrain in general. No, I'm not going to make the bold claim that these epically ingenious glasses will change your life or your sleeping patterns (everyone is different!), but they have made a significant difference in mine. Best-case scenario: You try them, you look chic AF, and you have better sleep. Worst-case scenario: You try them, you look chic AF, and nothing happens to your sleep. You still end up with the long end of the stick!

Blue Light-Blocking Glasses to Try Yourself 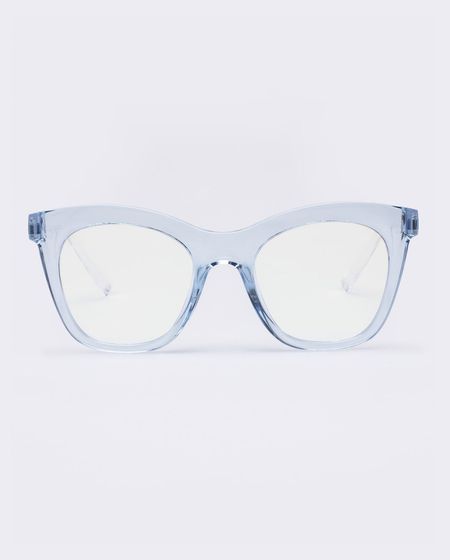 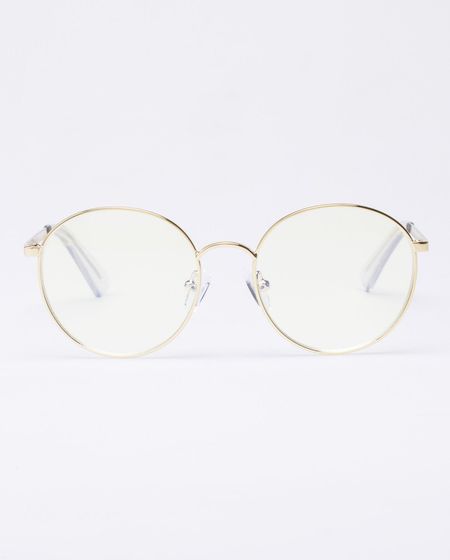 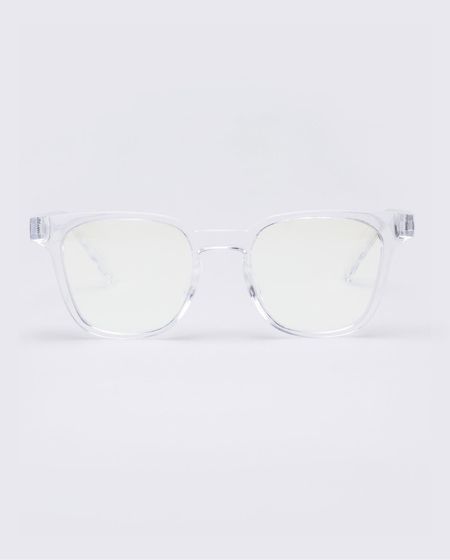 The Book Club Twelve Hungry Bens $3,040.00
Shop
14 Beauty Products That Protect Your Skin From Blue Light Damage
Article Sources
Byrdie takes every opportunity to use high-quality sources, including peer-reviewed studies, to support the facts within our articles. Read our editorial guidelines to learn more about how we keep our content accurate, reliable and trustworthy.