The History and Triumph of Black-Owned Makeup Brands 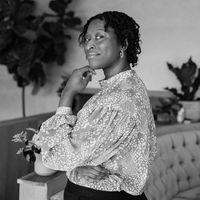 Quani Burnett
Quani is a inclusivity advocate in beauty and creator of Beauty4BrownSkin.
Byrdie's Editorial Guidelines

To honor Black History Month, we’re continuing to celebrate the beauty of Black Joy and all the hope and transformation it brings. From personal essays to deep-dives into history and culture, join us as we amplify Black voices and explore the products, traditions, and people leading the way.

2020 was a year. Marred by tragedy and a call to action for justice, the resurgence of the Black Lives Matter movement gained traction in a space that is uniquely positioned to speak to a broad audience: the beauty community. Ironically, it is within the beauty industry that Black women have been historically excluded—most evident in the lack of inclusive shade ranges and Black-owned options in large retailers. There was a time not long ago when the market for Black individuals to find extensive makeup options simply didn’t exist. While makeup for Black women can be credited to visionaries such as Overton’s high-brown face powder in the early 1900s, it wasn’t until the early 1970s that inclusive makeup options emerged in more prominent spaces.

1973: Eunice Johnson, businesswoman and wife of Ebony and Jet magazine publisher John H. Johnson, created Fashion Fair Cosmetics—arguably the keystone of Black-owned makeup in the late 20th century—after she noticed that models of her Ebony Fashion Fair would often mix their own pigments to create shades. Eunice approached larger makeup corporations like Revlon prior to starting her own brand, all of which turned her down. In 2003, Fashion Fair Cosmetics grossed $56 million in sales—at its peak, the largest Black-owned makeup company at the time.

1994: Supermodel and entrepreneur Iman, who would bring her own makeup on set in the 1970s, created Iman Cosmetics with the intention on providing a prestige collection of makeup for women of color.

1994: Black Opal Beauty was founded by Greek chemist Niko Mouyiaris in 1994, who created the brand to find makeup solutions for his Jamaican wife, Carol. The brand offers products that address concerns such as hyperpigmentation and shade-matching makeup options.

The two decades after these Black-owned makeup brands were founded were filled with companies that catered to deeper skin tones, but were not owned by such. Even with Black-owned options, colorism still invaded the spaces in which barriers were being broken, as lighter shades were often more readily available and in stock than deeper shades. Moreover, it appeared makeup for deeper skin tones were more available at drugstores and beauty supply chains instead of luxury retailers.

We are now in a time where Black-owned makeup options occupying more spaces including large retailers, online and influencer markets, and even clean beauty.

2015: Melissa Butler, CEO of The Lip Bar, started her company in 2012 with the goal of creating clean, high-performing lipsticks that flattered all skin tones. In 2015, the Black-owned cosmetics company was denied investors by the popular show “Shark Tank." In what could’ve defined her career in a negative direction, Melissa fueled the rejection into perseverance—now, The Lip Bar is sold in Target stores nationwide and just opened a flagship store in Detroit.

Two year later, we saw an emergence of Black-owned beauty brands that continued to invite inclusion to the forefront of conversation.

That same year, Reynell Steward, a media personality also known as Supa Cent, created The Crayon Case, an online cosmetics company that once grossed $1 million in 90 minutes during a Cyber Monday sale.

Alicia Scott of Range Beauty, created an inclusive line in 2017 that catered to Black women in the clean beauty market.

Mented Cosmetics, known for creating the perfect nude lipstick for deeper skin tones, launched in 2017 by Amanda Johnson and KJ Miller. The Harvard educated owners were able to secure $1 million pre-seeding funding, a feat that is ground-breaking as Black entrepreneurs receive less than 1% of VC capital.

The success of these brands and their ability to thrive in an over-saturated market proves that there is room for us all.

2020: Presently, friends and former Johnson publishing executives Cheryl Mayberry McKissack and Desiree Rogers purchased both Fashion Fair Cosmetics, as well as Black Opal Beauty, with plans to grow globally and continue to create innovative products for women of color, honoring both brands’ expansive history of significance of culture for Black women in beauty.

Interestingly enough, August is National Black Business Month, an observance of the importance to Black owned business to both the Black community and domestic economy. It is important to recognize the barriers such as lack of capital investment, while actively working to dismantle said barriers. As consumers and influencers alike, improving our awareness of these obstacles, and a sustained commitment to supporting Black-owned beauty brands are ways to cultivate the continued growth for Black-owned beauty companies.

Despite the challenges, Black women in beauty will always tell the story of perseverance, persistence, and passion. From breaking barriers to expanding shade ranges to landing in major retailers, Black women continue to prevail in the face of adversity. Though the beauty industry has much ground to improve upon in becoming inclusive for all, it’s important to annotate the rich history of Black women in beauty, celebrating the successes along the way.