4 Black Muslim Women on Fashion, Faith, and Taking Up Space

"We aren't waiting for the world to accept us." 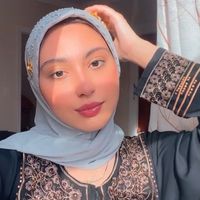 Historically, the fashion and beauty industries have had a reputation for under-representing the people and culture they profit from. Still, it doesn't negate that many people turn to style for expression and other reasons—Black Muslim women included. Often, people love to speak for women of color rather than allowing them to speak for themselves. To further explore the nuances between fashion and culture, I spoke to Black Muslim women about what style means to them, the prejudice and standards they face, and how they're soaring beyond expectations to take up space. Read their stories ahead.

Sagal Muse is a content creator, illustrator, and marketing professional based in Toronto. She currently works as a content manager and is the founder of Muse Avenue magazine. Her interests include DEI, digital illustration, tech, and creating fashion and lifestyle content.

"Growing up, I relied on magazines and blogs to find fashion inspiration. I enjoyed flipping through the pages and seeing all of the latest collections designed by Chanel, Lanvin, Balmain, and more. However, once Instagram became popular, I realized I was basing my fashion sense on lookbooks and styles that weren't intended for me. I could never look at fashion spreads without thinking about how I would adjust trendy looks to fit my modest style.

I rarely engaged with fashion or lifestyle content because the women who graced the covers of magazines never represented me the way a Muslim or Black woman could. In a way, my relationship with fashion started as a game of imagination—where I had to use my creativity regularly to make Y2K styles work for me. Thankfully, with the rise of social media and influencers, we see more representation of Black and Muslim women in fashion.

My relationship with fashion has become more about self-expression. Now when I see new modest styles, in most instances made trendy by Black Muslim women, I have the opportunity to try out the same looks without feeling like I need to compromise my style or faith. Thanks to this new wave of representation, fashion feels a lot less exclusive and more accessible.

Black Muslim women are at the intersection of three beautiful, yet marginalized identities—being Black, Muslim, and female. Speaking from my own experiences, we generally feel the burden of all three. Sometimes in separate instances, and other times all at once. The standard when you’re viewed as less-than-equal in society is to work twice as hard to prove yourself to be otherwise. For Black Muslim women, it’s not only ingrained in us to work three times as hard but it’s expected of us by society.

On the same hand, Black Muslim women bear the burden of tokenization in the fashion industry, while brands get celebrated for their quick efforts. On social media, it feels like unpaid brand partnerships with companies are just an aim to reach an untapped market. In media, we see campaigns that utilize Black Muslim women to showcase diversity, while we hear stories of models being mistreated. It's clear that Black Muslim women bring brands value, and while the surge in representation is much needed, in many cases it may just be a facade. For instance, some brands cast Black Muslim women as models, and yet support (or stay silent on) topics that directly affect this group of women—namely, the banning and criminalization of Muslim women wearing hijab, while celebrities and models are praised for appropriating similar styles.

Umi Mohammed is a non-profit equity leader and the co-founder of Project UP (Unleash Potential) a grassroots organization that creates safe spaces for young Black Muslim girls and women. She is also the co-host of The Storied Mind Podcast, where she amplifies BIPOC voices.

"To me, fashion is a vehicle for creative expression, identity, and how we connect with others. Fashion is a form of self-expression that allows you total control over what you showcase and how you want to show up in the world. My grandmother sparked my interest in fashion, and she is why I adore patterns, prints, and colors. I believe we should wear things that bring us joy.

The fetishization of Black women, especially in fashion, isn’t a new topic. However, Black Muslim women have the added layer of Islamophobia, which means the intersections of our identity makes us even more vulnerable to being fetishized. The historic and present hypersexualization of Black female bodies, and the allure of dressing modestly and wearing the hijab, draws unwanted attention to us. Although fetishization may often be seen as flattering in nature, it is actually harmful because it continues to serve problematic notions of different groups of people. The standards set in the beauty and fashion industries favor White, Eurocentric features and ideals.

"Although the beauty and fashion industry touts that they're moving towards more inclusion, I think there's still work to be done. I believe inclusion and representation are authentically admiring, celebrating, and capturing all women's beauty regardless of race, sexual orientation, religion, ethnicity, or ability. I hope to witness a world where women can exist without objectification and dehumanization to fit an unrealistic standard of beauty."

Nafisa Omar is a 22-year-old Somali-American content creator based in Seattle.

"Over the past few years, a massive movement has pushed for inclusivity and diversity. While that movement has inspired many firsts for many Black Muslim women, it didn't eliminate performative admiration and support. Having one token Black Muslim hijabi in campaigns and social media has become a standard box for brands to check and show inclusivity—which shouldn't be the case. That fetishization is potentially harmful, and unless it's authentic and meaningful, it hinders progression. Representation has become a tool that companies often use as a convenient substitute instead of actual substantiative change, which is where it really counts."

Zaynab Yusuf is a fashion and lifestyle blogger who shares content to help create space for Black Muslim women. She wants her platform to inspire women and to change the narrative surrounding modesty.

"I find fashion very empowering because it allows me to show up authentically and unapologetically. It also encourages me to work towards making spaces for people that look like me. While we discuss Black Muslim women's challenges in fashion (and beyond), we must acknowledge that all Black Muslim women do not experience the same challenges. For example, plus-size Black Muslim or darker-skinned women may have a completely different experience than I do. Ultimately, it's important to highlight how deeply nuanced these challenges can be.

We're not waiting for the world to accept us.

I have been slowly getting my foot in the door as a model in the modest fashion industry because it's where I felt I would be accepted. Most modestly dressed models within the industry are lighter-skinned Muslim women with Eurocentric features. When Black Muslim women are included, they're often subjected to tokenism. The same piece of clothing that is considered "modest" on a thin White Muslim woman may be perceived as inappropriate or promiscuous on a curvy Black Muslim woman.

After working in the modest fashion industry, I've learned how important representation is—especially for young Black Muslim girls. There aren't many spaces for Black women—let alone Black Muslim women—where they are represented in the way we deserve. Still, I think many of us have gotten to a place where we're not waiting for the world to accept us. Instead, we are learning to accept ourselves and take up space in the world."

6 Muslim Women on Using Makeup to Empower Their Identity