The Real Reason I've Never Been on Birth Control

written by
Hallie Gould
Hallie has worked in beauty editorial for nine years and has been at Byrdie since 2016.
Byrdie's Editorial Guidelines
Hallie Gould
Reviewed by
Sara Twogood
Sara Twogood, MD is an obstetrician-gynecologist at Cedars Sinai with a passion for educating the public about female health and wellness.
About Byrdie's Beauty & Wellness Board
Sara Twogood
Obstetrician-Gynecologist

It started off as a good thing, I suppose. In ninth grade my friends and classmates began taking birth control to improve their skin. I never had much of a problem with my complexion; fortunately, it’s always been even and blemish-free.

Then, what began as a blessing became a presumption. My mother took me to my first gynecologist appointment when I was 15 because she was convinced I was having sex (I wasn’t). She was just being a responsible, helpful parent—but I saw it as a violation. That actually became a pattern in our relationship during my teenage years; her looking out for my well-being and me resenting her for it. But that’s how it goes with adolescents, no?

I got to the doctor's office and they questioned me about my menstrual cycle, sexual activity, the usual. I answered plainly that I was a virgin. The doctor asked my mom to step out and inquired again. She was comforting and understood if I was holding back information for the sake of saving face in front of my mother. But I wasn't. It all felt like a creepy overreaction. Again, in hindsight, everyone was just being especially sensitive to my feelings and helpful in the difficult pursuit of growing up. But, sigh, I didn't realize that until much later.

I had an uncomfortable pap smear and silently vowed to stay away from the gynecologist for as long as I could. I left without asking about birth control or any information for future reference.

When I did become sexually active, I didn’t begin taking the pill because I didn’t want my parents to know. In fact, I didn’t even tell them I had a boyfriend. So for years I relied on other contraception and didn’t really give it a second thought. I also saw the way various types of birth control affected my friends: weight gain, mood swings, and even depression. Honestly, I wanted no part in it.

Once I graduated from school and began living a more adult existence—dating casually and not-so casually—the issue of birth control became a hot topic in my brain. Like, perhaps it was irresponsible that I wasn't taking all the precautions available to prevent an unwanted pregnancy. But, by then, my issues with the birth control pill ran deeper than just the possibility of weight fluctuation. I really didn’t like the idea that I would have to pump synthetic hormones into my body on a daily basis. We know about possible side effects and everyone around me seems to be doing fine, but I couldn’t help but think: If I’ve made it this far, what’s the point? And I feared I could have an atypical response.

No matter the type of birth control, there are side effects.

I found myself at a turning point. I could either ensure myself the peace of mind and just get a prescription, or I could keep on without it. I've used period and ovulation tracking apps like Clue (these are a great way to get to know your body, even if contraception isn't your goal), and I've thought about getting an IUD. It seems like a great option, but frankly, I'm squeamish about the idea of having a foreign object in my body.

No matter the type of birth control, there are side effects—the most common include spotting, nausea, breast tenderness, headaches, weight gain, decreased libido, and mood changes. While they don't sound great, those symptoms are pretty close to what happens during a particularly bad week of PMS anyway.

This quartz- and amethyst-infused blend of essential oils really helps with headaches. 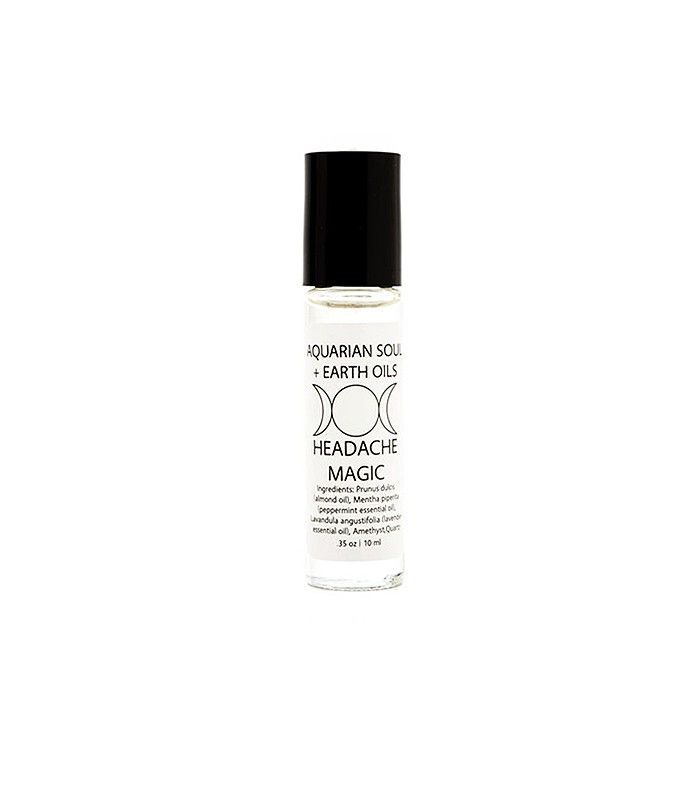 When it comes down to it, it seems like it wouldn't be the worst idea to try the pill for myself—to at least see how I feel once I'm on it. Of course, I'll definitely book an appointment to discuss these concerns with my regular gynecologist.