Have you used Bio-Oil on your face yet? If not, you should really consider it—and we’re not just saying that because Kim Kardashian West is already a fan of the trick. While good-old Bio-Oil has been a beauty cupboard staple for many of us for some time now, few have actually dared to slather it any higher than shoulder level.

But since the vitamin-rich oil can reap huge benefits for skin all over your body, from helping to fade stretch marks and scars to soothing sun-blasted or wind-whipped dry skin, it stands to reason that there are plenty of pros to dabbing it on our faces, too. And guess what: The studies agree.

Happily, the folks over at Bio-Oil are pretty hot on clinical trials, and so have a wealth of trial-led evidence to back up their claims about just how effective using Bio-Oil on your face can be. Keen to know more?

Keep scrolling for all the reasons you should consider dabbing and slathering the peach stuff. 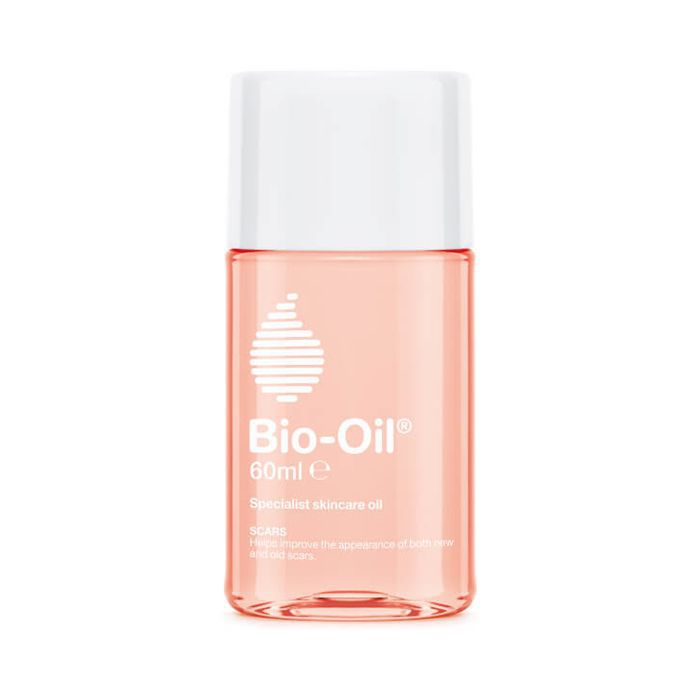 Fans of Bio-Oil will all know that the formula is geared heavily towards minimizing the appearance of scars and stretch marks. Quite gloriously, it can also do the same for acne scarring, even on the delicate skin on your face.

In a 2012 study carried out at China's Peking University, on people with newly formed acne scars, 84% of participants reported an improvement in the condition of their scars after applying the oil twice daily for 10 weeks, with 90% of testers also confirming that using the oil reduced the redness of their scarring.

Another point to note is that despite being an oil, the formula is actually noncomedogenic, so you don’t need to worry about clogging your pores.

Kim Kardashian West has made no secret of her love for Bio-Oil, but it seems she’s cottoned on to one key benefit way ahead of the rest of us. “It prevents wrinkles around my eyes and stretch marks over my body,” she said of the oil way back in 2013, while Kourtney Kardashian confirmed to Allure that she also follows Kim’s lead, using Bio-Oil around her eyes to prevent signs of aging.

So does it work? The formula contains high quantities of vitamin A (which, as we all know, is where retinol is derived from), along with vitamin E, and both are known for their regenerative properties.

A 2011 study also backs up the Kardashians’ regimen, finding that after applying Bio-Oil twice a day for 12 weeks, 94% of testers reported a “significant” improvement in the appearance of UV damage to their skin (the number one cause of lines and wrinkles).

If you’re accustomed to the magical powers of high-performance retinols, peptides and hyaluronic acid serums, then you may be disappointed if you switch to nothing but Bio-Oil.

Yep, Bio-Oil can even tackle this tricky problem. Whether your complexion is dealing with sun damage or it’s fluctuating hormones that are upsetting the balance, using the oil daily on your complexion can help to regulate hyperpigmentation (aka darker spots or patches). It comes back to the blend of vitamins and botanical extracts (which include calendula, rosemary, and chamomile) found in Bio-Oil, and their ability to replenish UV-damaged skin cells.

The proof? A 2011 study carried out in Texas found a “statistically significant improvement” in the appearance of uneven skin tone for 86% of its testers, who each applied Bio-Oil twice a day for 12 weeks. An earlier study, carried out in 2005 by the Photobiology Laboratory of the Medical University of South Africa, also reported similar results, noting that while all skin tones saw some improvement after six weeks of use, darker complexions saw most improvement after eight weeks.

If you like to reach for the Bio-Oil when your skin’s feeling dry, you’ll be happy to know it can reap the same rewards for the dehydrated skin on your face. We’ve already discussed the noncomedogenic properties of the formula, which ticks a huge box for many of us, not to mention the hydrating properties of vitamin E and plant oils.

An additional benefit of Bio-Oil for dry skin, however, is its occlusivity—basically, the way in which it can trap water and moisture in the deeper layers of the skin, acting as a barrier to prevent the rapid moisture loss that can lead to the cyclical nature of dryness.

A 2008 study carried out by researchers in Milan found that the occlusivity level of Bio-Oil is in fact very similar to the vernix caseosa, the viscous biofilm (aka white stuff) that protects the skin of babies while they're in the womb. Fun fact: Scientists often use this as the ultimate benchmark for skin moisture and hydration levels.

5 Awesome Ways to Use Bio-Oil