These Shaving Creams for Men Guarantee Smooth and Soothing Results

Our Top Picks
Best Overall:
MARLOWE. No. 141 Shave Cream at Amazon
This affordable shaving cream is designed to condition and protect frequently shaved skin.
Best Budget:
Cremo Original Shave Cream at Amazon
This go-to shaving cream is non-foamy and creates a smooth and close shave.
Best Drugstore:
Harry’s Shave Cream at Bed Bath & Beyond
Those with sensitive skin will appreciate this non-irritating formula—and it won't break the bank.
Best for Ingrown-Prone Hairs:
Bevel Shave Cream at Amazon
This shaving cream uses aloe vera, shea butter, and comfrey extract in place of water to soothe and moisturize.
Best for Sensitive Skin:
Proraso Shaving Cream Tube: Sensitive Skin at Amazon
If you have sensitive, easily irritated skin, this gentle and rich shaving cream is made for you.
Best for Dry Skin:
Supply Ultra Lather Shaving Cream at Supply.co
Shea butter and jojoba oil join forces to hydrate dry skin while shaving.
Best for Bald-Head Shaving:
GEN2 Premium Shaving Lather at Gen2care.com
This nourishing shave cream is great for a close shave without irritation.
Best for a Badger-Brush Shave:
The Art of Shaving Shaving Cream at Amazon
Improve razor glide with this hydrating shaving cream.
Best Non-Foaming:
Anthony Shave Gel at Amazon
Get a close shave every time with edges that'll make others jealous.
Best for Detailing:
Frederick Benjamin Hydro-Glaze Cooling Aloe Shave Gel at Frederickbenjamin.com
No foam here, so you'll be able to see exactly where you're shaving for a precise look.
In This Article

While it may seem like this matter of fact only complicates your search, rest assured: The best shave creams center on key soothing and nourishing ingredients like aloe vera, oatmeal, shea butter, jojoba oil, allantoin, and more. Plus, they’re but one step in an otherwise ornate, steadily navigated shave regimen (alongside pre-shave oils, aftershaves, and of course, the razors themselves). No good shave is achieved without the lot.

In regards to that pivotal part of the shaving regimen—the shave itself—here are the best shave creams for men. We compiled our favorites with insight and tips from barber Luke Powell of Ojai, CA, and considered the most common needs of different skin types and body parts. So there’s probably more than one shave cream on this roster for you, since the best shave cream for men includes many bests.

Here are our picks of the best shaving creams for men. 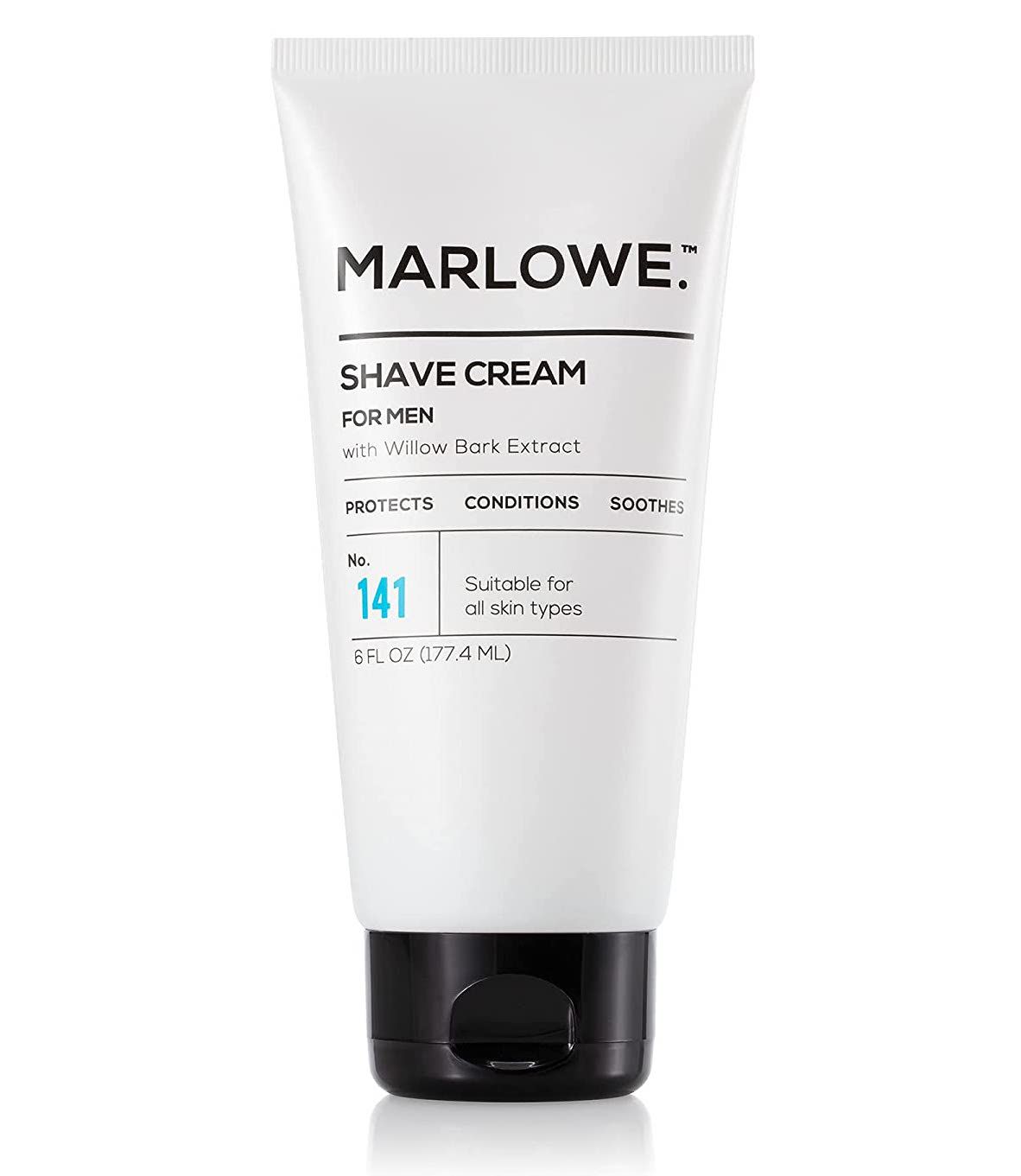 Buy On Amazon Buy On Walmart

Nothing softens skin better than a shea butter and coconut oil base, which is what Marlowe’s shave cream uses. It also deploys the brand’s signature “M.Blend,” which includes green tea, willow bark extract, aloe, and algae extract; this formula soothes, detoxes, hydrates, and fortifies. Best of all, it won’t ever break the bank. 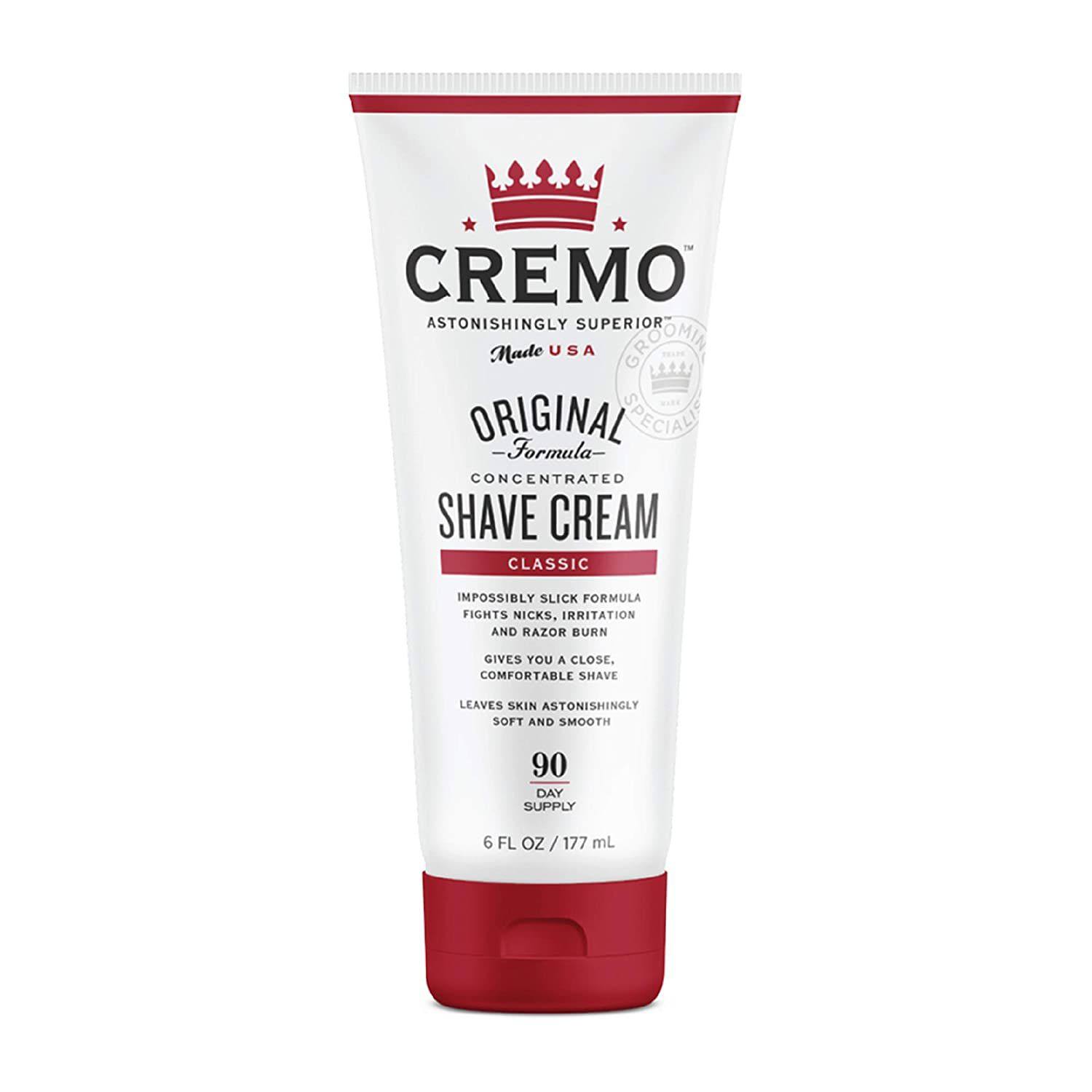 Buy On Amazon Buy On Walgreens

Made with aloe, allantoin, and a skin-harmonizing blend of papaya fruit extract, macadamia seed oil, olive leaf extract, and xylitol, Cremo’s low-cost formula is a (gentle) workhorse on the skin. It's super slick and promises a smooth, nick-free, bump-free shave—and on top of all that, it’s a bargain of a deal. 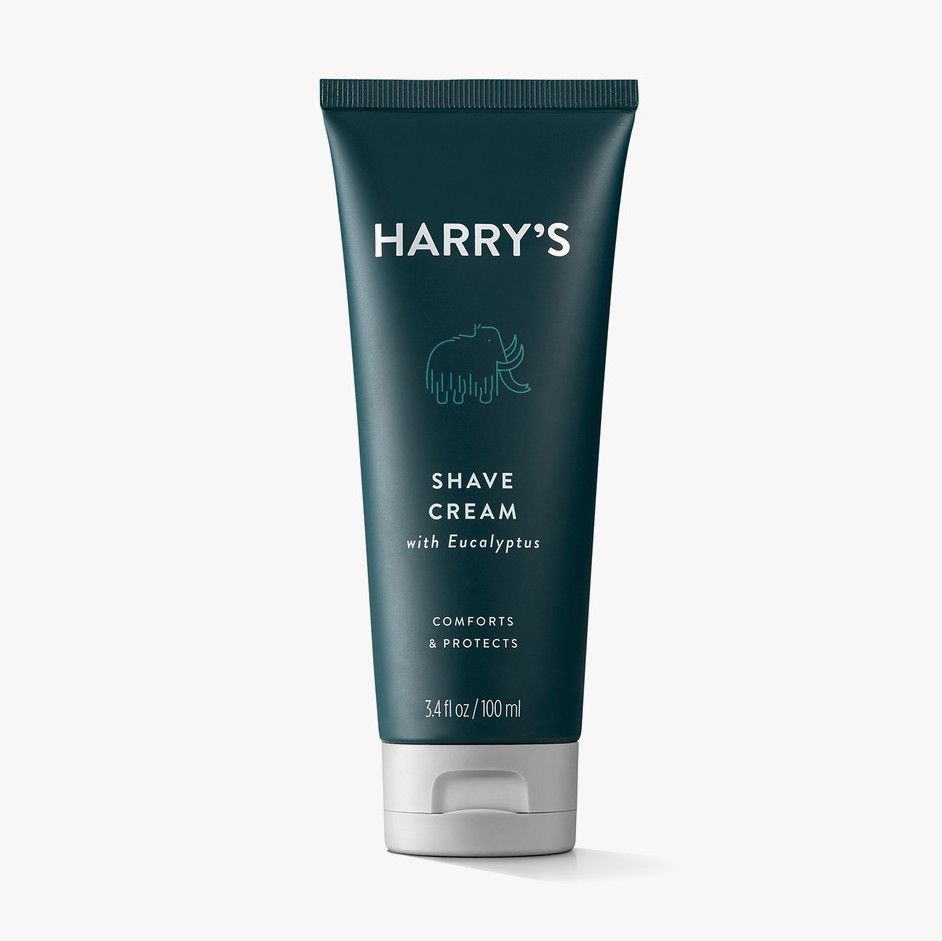 Buy On Bed Bath & Beyond Buy On Harrys.com

In Harry’s Shave Cream, formulated with eucalyptus and mint oils, and aloe vera, tone and calm the skin while also giving you a refreshing, invigorating tingle. It’s an affordable formula, too, while remaining one of the best shaving brands in the game. Harry’s is a brand that leads the pack in efficacy and accessibility, taking a no-frills approach to a reliable, close shave (not to mention, the rest of your skin and hair regimen, too).

We Hunted Down the Best Drugstore Face Moisturizers—Here They Are 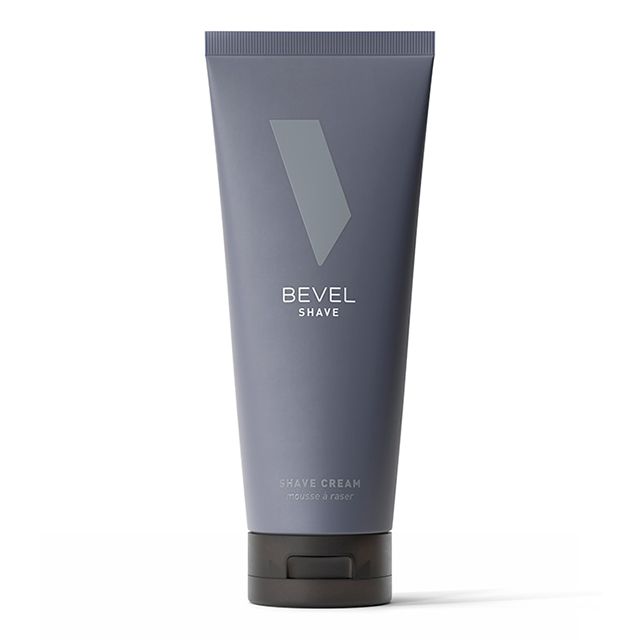 Really, if you are ingrown- and bump-prone (and in the same breath, if you have coarse or curly facial hair), then you should be shopping Bevel’s assortment of shave and skincare products. This shave cream, rich in aloe and vitamin E, offers a nourishing, soothing, fortifying shave, plus it utilizes shea butter for a hair- and skin-softening soak, as well as comfrey extract to fight inflammation and promote healing.

Powell adds these shave tips for guys with ingrown-prone skin: “Exfoliate regularly. Since ingrown hair is often formed due to pore blockage by dirt and dust, if you regularly exfoliate your skin and remove the dirt, the hair will grow in the right direction. Secondly, pat your face dry after a shave. Do not rub your face with a towel, as it scrubs against the skin, and that can further lead to breakouts and ingrown hairs.”

These Are the Best Razors for Silky-Smooth Skin 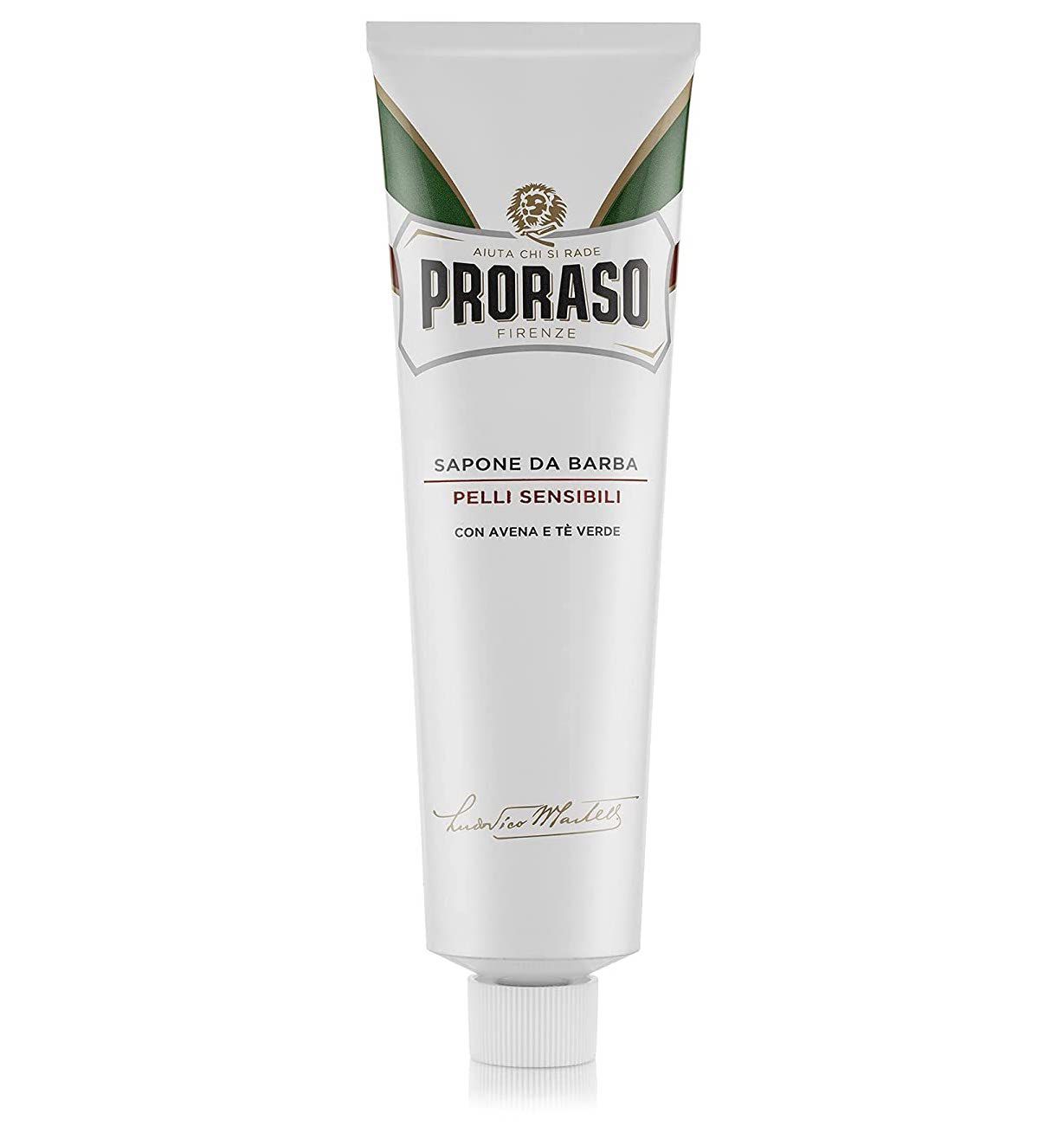 Buy On Amazon Buy On Bigelowchemists.com

This is Powell’s favorite shaving cream—not just for sensitive skin, but especially for it. Proraso has long been a barbershop and home-shave mainstay, largely thanks to its sensitive-skin formula. This one harnesses soothing and anti-inflammatory ingredients like oatmeal and green tea, and it carries a crisp citrus scent. Proraso makes its shave cream by mimicking the old-school soap-making process and leaves its shave cream to mature for three days before pumping it into each tube. This makes it extremely smooth and rich, so it feels luxurious as it lathers. (Powell suggests applying it with a shave brush since it builds such a rich lather. He also advises against a cartridge razor if you have sensitive skin and suggests using a single-blade safety razor instead.)

The 12 Best Natural Deodorants for Men That Actually Work 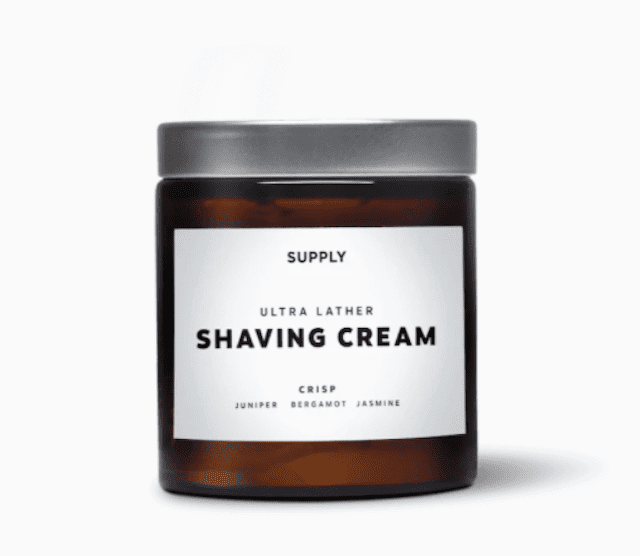 Supply’s shave cream, utilizing hero ingredients like shea butter and jojoba oil, results in a hydrating, anti-inflammatory, and antimicrobial formula. Together they help fortify and nourish skin, no matter how dry it may be. The plant-based recipe, with kaolin clay, soaks up impurities from the skin and hair and creates a layer atop the skin that allows your razor to glide across the skin with little resistance. 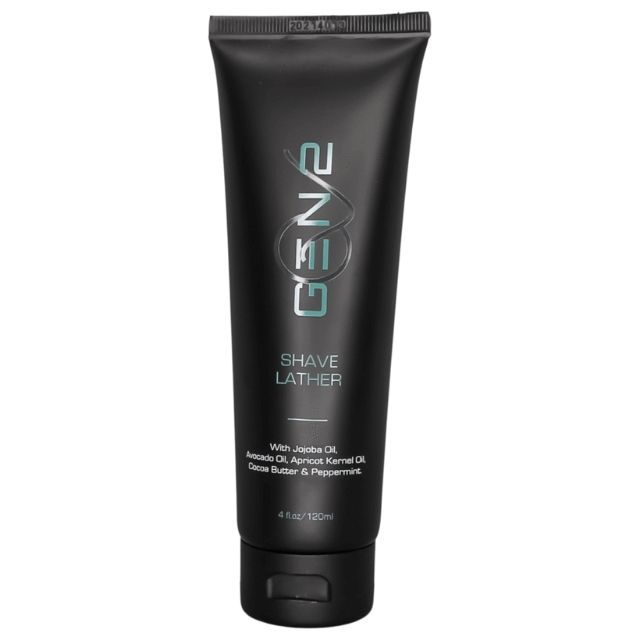 GEN2 has a great bald-head assortment that includes this soothing, nourishing shave cream. It combines jojoba oil, avocado, apricot kernel, and peppermint oils for nourishing, anti-inflammatory, and toning properties—and naturally, it cools and tingles to the touch, too. The love triangle of glycerin, cocoa seed butter, and shea butter help soften the scalp and make for a smooth, nick-free shave (assuming you’ve also got a fresh blade and are taking it slow).

Best for a Badger-Brush Shave: The Art of Shaving Shaving Cream 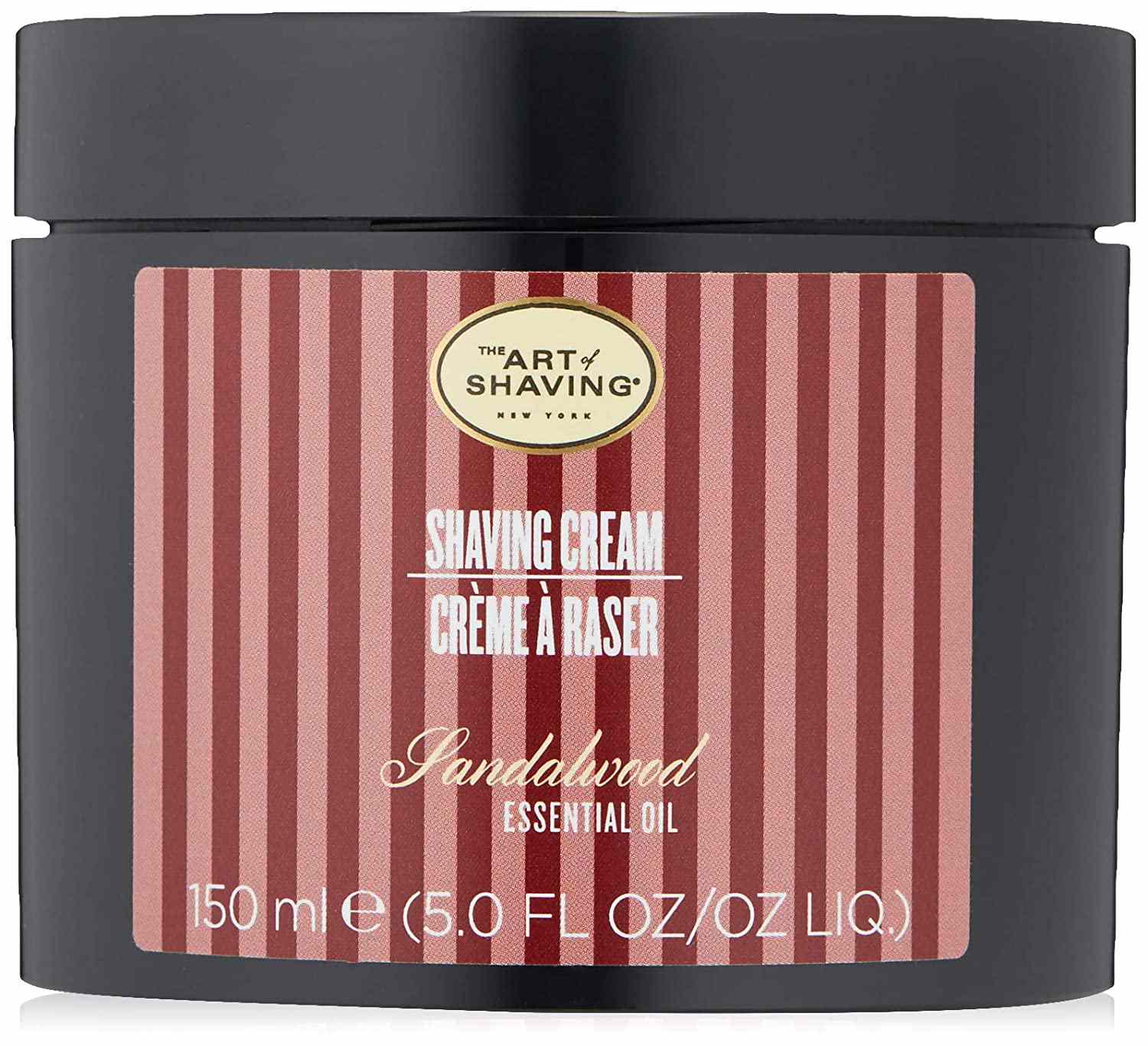 Buy On Amazon Buy On Theartofshaving.com

Load your badger brush with The Art of Shaving’s skin-softening shave cream (or stir it into a shave bowl), and watch it whip gently into shape as you lather it around your cheeks and chin. Its base is rich in fatty acids, thanks to myristic and palmitic acid, and our favorite blend from the brand carries a warming, soothing sandalwood scent.

Don't Skip Aftershave—Here Are the 12 Best to Reduce Irritation 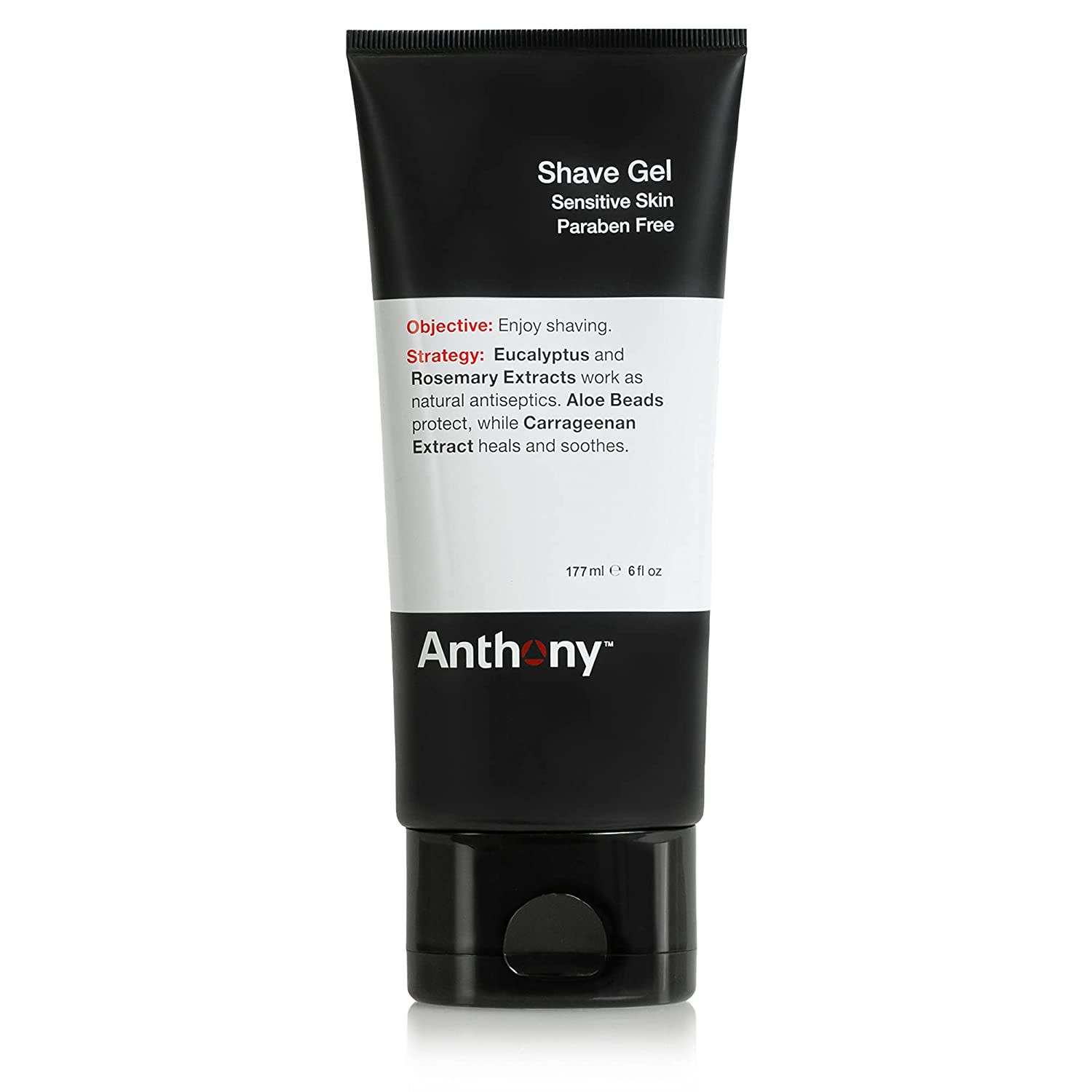 If you prefer to see your stubble as you shave it, then you want a transparent, non-foaming gel. This also allows you to navigate the contours of your face with much more precision. Anthony’s shave gel ranks high in any category, thanks to its combination of eucalyptus, aloe, rosemary extract, and sea kelp extract. 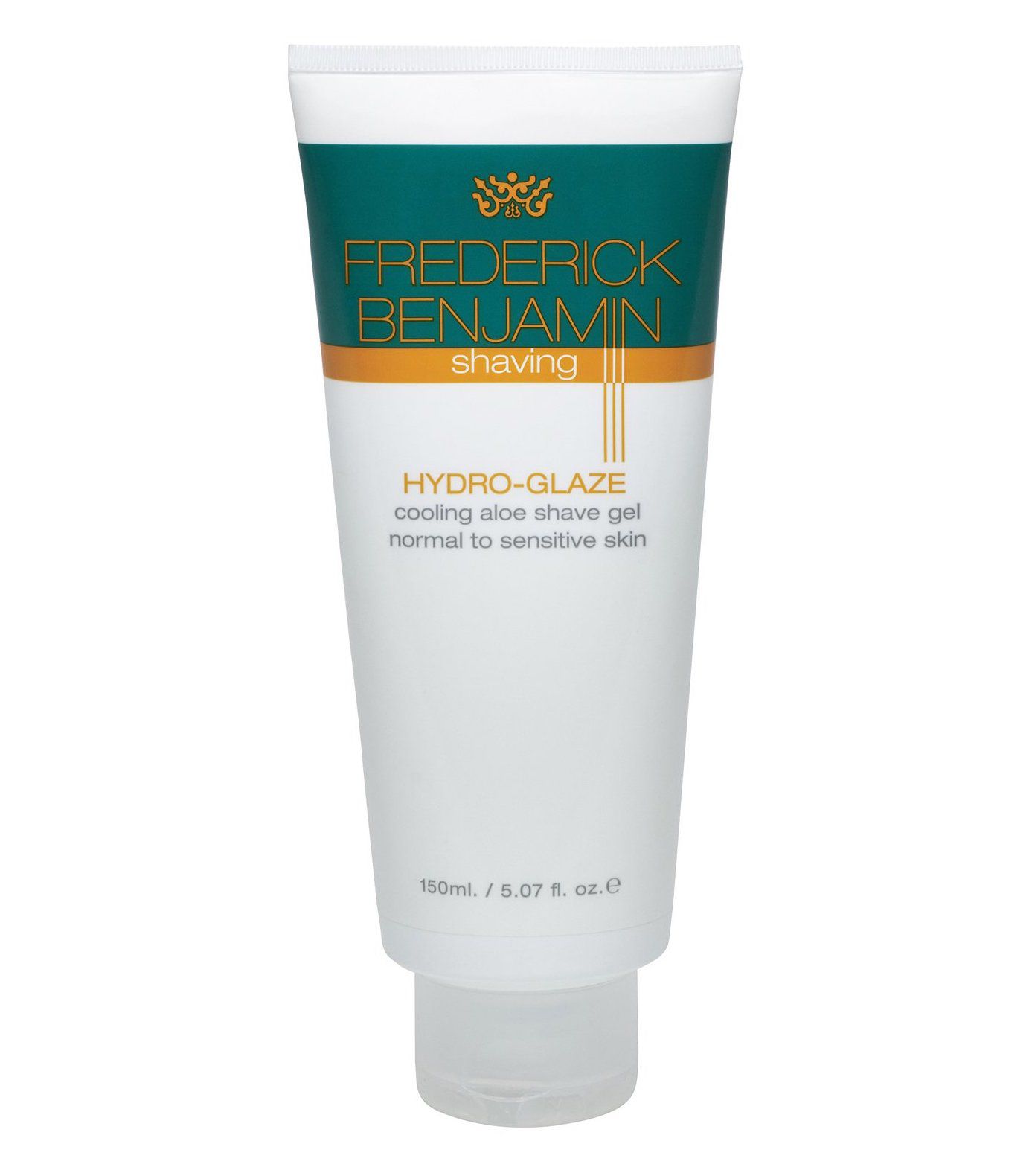 Another terrific non-foaming gel, Frederick Benjamin’s shave agent is great for detail shaves, like the neckline, cheeks, lineups, and more. Of course, it works wonders for a full-face shave, too, but its transparency lends itself to the careful edge work. It also soothes on contact thanks to aloe vera and tones skin with the anti-inflammatory abilities of witch hazel extract. Not to mention that this formula, containing castor oil, hydrates skin and hair alike while softening whiskers and fortifying skin, guaranteeing a clean, calm shave (detailing or otherwise).

These Are the 15 Best Face Washes for Men, According to a Byrdie Boy 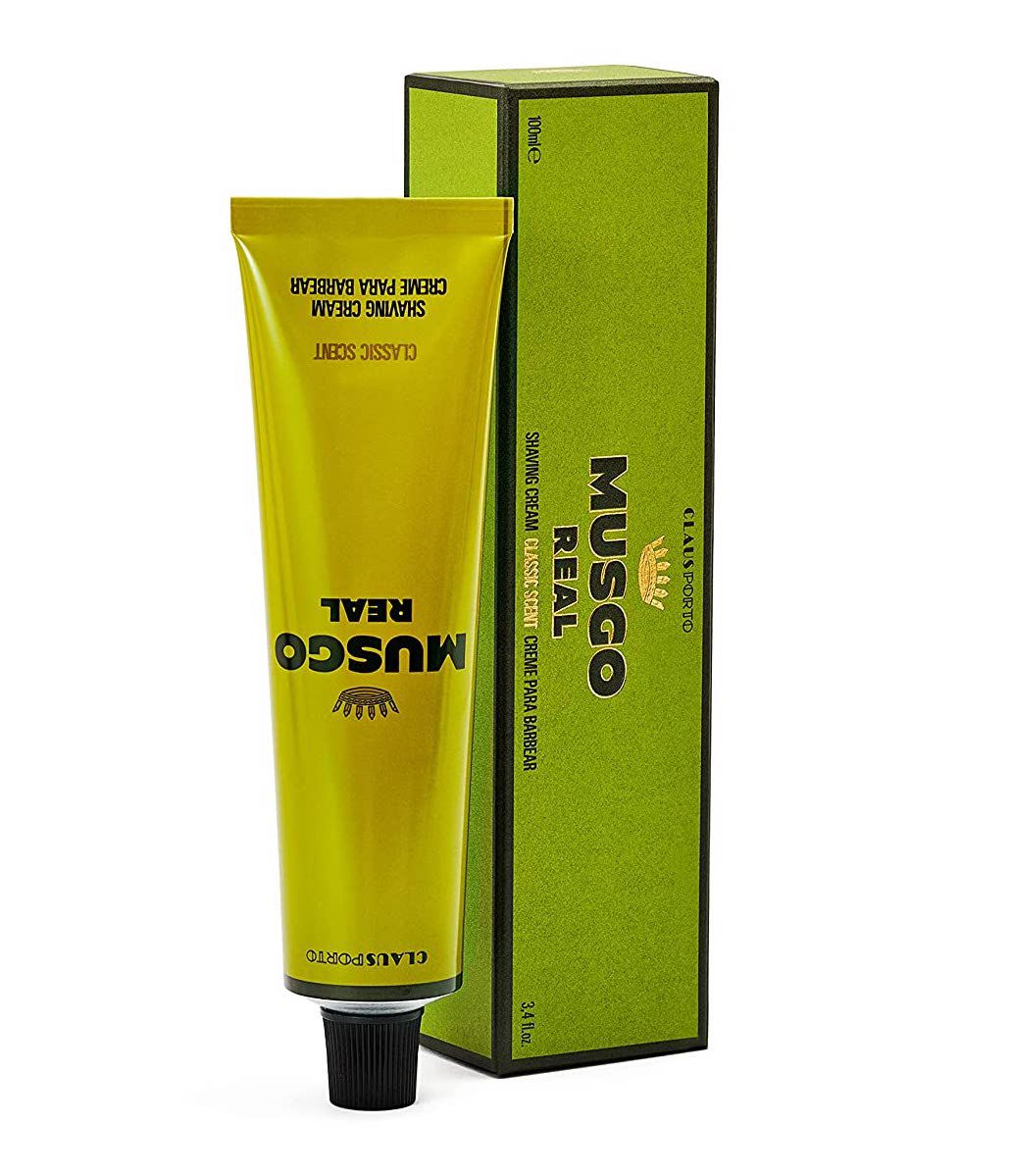 With subtle, soothing notes of sandalwood, vanilla, and patchouli, Claus Porto’s Shaving Cream Classic Scent will make you feel like you’re getting a barbershop shave. It’s of professional caliber, too, with a soothing and softening base containing lanolin and glycerin. This vintage brand has been around for nearly a century and a half, and its assortment remains one of the world’s finest and reliable, from shave creams to soaps and lotions.

Powell also loves Claus Porto’s pre-shave oil: “It’s the ultimate lubricant, and a very natural, quality product. I highly recommend it for guys who like a close shave.”

What to Look for in Shaving Cream for Men

Shop Specific to Your Needs

As mentioned above, you need to understand your hair and skin before you buy shaving cream. Whether you are ingrown prone or have dry or sensitive skin, you need to shop accordingly because the best shave cream for men is not universal—it is individual to the man. (And to the part of the body he’s shaving, as body hair can have different qualities than facial hair or scalp hair.)

It’s confusing to delineate between shave lotions, creams, and gels. While the nomenclature can be insignificant, it’s important to look for hydrating, nourishing, soothing ingredients like jojoba oil, shea butter, and aloe vera. These will dictate how well the product works, regardless of its type. Still, if you’re curious, here is Powell’s explanation of the difference: “Lotions are the lightest consistency, have a low oil content, and typically only moisturize for a short period of time. Creams are thicker than lotions and contain more oil than a lotion.”

“The wrong choice in shave cream wouldn't be the biggest mistake, but the second biggest,” says Powell. “Most importantly you want the sharpest blade. Choosing a good blade is key, cream is secondary.” Ditto for having a fresh, sharp, clean blade with each shave.

Do shaving creams for men expire?

Expiration dates vary from one product to the next. Typically a shaving cream will last for a couple of years if left unopened, while the past-open expiration date will be between six to 12 months. Look for a tiny logo of a product container on the back of your shaving cream, which should have a number (one to 12) and a letter (M for months, Y for years) typed inside of it. So, if it says 6M, that means its ingredients and efficacy are guaranteed for six months after the open date.

What is the difference between men’s and women’s shaving cream?

Hair grows differently from one person to the next and from one body part to the next, so men’s and women’s formulas aren’t typically different besides the scent they include. (Classic men’s scents tend to be woodier, with sandalwood as the most common choice.) The main thing both men and women should shop for is a shaving cream that targets the type of hair they’re trying to remove. For example, if a man has a coarse, curly beard, he will want something that helps soften skin and hair and prevents ingrown hairs.

What ingredients should you look for in a men’s shaving cream?

The best men’s shaving cream formulas contain soothing ingredients like aloe, allantoin, and oatmeal and have a nourishing, hydrating base like shea butter, lanolin, or jojoba oil. (Our picks above have any one or combination of these ingredients.)

Byrdie contributor Adam Hurly has been covering grooming for 8 years. He began working for Birchbox in 2013, then became a freelance writer/editor in 2016. Since then, he has written for GQ, Men’s Journal, Men’s Health, Esquire, Gear Patrol, Bloomberg, Men’s Fitness, Muscle & Fitness, Forbes...and of course, Byrdie.

The 12 Best Razors for Men to Get a Smooth, Clean Shave
Article Sources
Byrdie takes every opportunity to use high-quality sources, including peer-reviewed studies, to support the facts within our articles. Read our editorial guidelines to learn more about how we keep our content accurate, reliable and trustworthy.