This Tanning Mousse "Color-Corrects" Based on Your Skin Tone

As beauty editors, we get bombarded with a ton of new products every day (we know—tough life). Reviewed is a series where we report on some of the best products we’ve tried. Whether it’s a drugstore lipstick that lasted all day or a hand cream that saved us this winter, you'll find all our favorites in this column. Enjoy!

Growing up in Seattle, Washington, the chances of me getting a natural tan were about as likely as spotting a palm tree on Mount Rainier. The lack of sun for weeks at a time meant that I was Edward Cullen pale for most of my formative years and thus had to resort to faux tanning to get the golden California-girl limbs of my dreams. My first at-home tanning experience involved a strange, colorless gel-lotion that provided absolutely no guiding color and took hours to develop, usually resulting in me waking up with streaky, orange legs that in no world resembled anything close to natural. I'd more likely be asked if I had gotten pushed into a dirt pile or maybe fallen into a vat of bone broth than if I had been on vacation recently. I used it religiously nonetheless—blotchy brown ankles, be damned! Smelling strongly of DHC and slightly resembling a Cheeto that had seen better days, I arrived in L.A. for college and suddenly realized what a real tan looked like—that would be, golden, glowing, and usually with olive (not orange) undertones. Because there’s actual sunshine in L.A., I soon procured a natural tan of my own, and like most things that you obsess over until you actually get them, I stopped thinking about being tan for the next eight years. 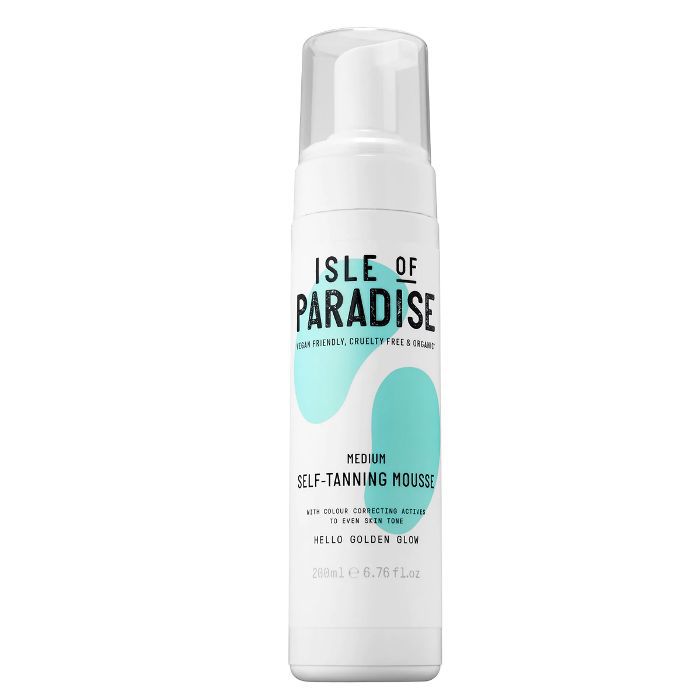 Then, I moved to New York and experienced seasons for the first time. Now that my legs were covered (and shivering) half of the year, they had reverted to their marshmallow-paste state. I quickly took up a spray-tanning habit, which helped me avoid blinding anyone with my limbs during my first New York summer. But spray tans have their annoying qualities, like the fact that you smell strongly like DHA for the first day and that you look kind of crazy for the first 24 hours before you rinse off the guiding color. But as a supremely lazy person, the thought of attempting self-tanning at home sounded even more annoying. So when I first got a pitch for celebrity spray-tanner Jules Von Hep’s new self-tanning line, Isle of Paradise, I was skeptical and more or less disinterested. But I liked the line’s whimsical vibe and body-positive messaging, so I set up a meeting to meet with Jules while he was in town. During our meeting, he explained to me the concept behind the line’s color-correcting technology.

In all his years as a celebrity spray-tanner, he had grown tired of having to color-correct his clients' spray tans after each initial spritz. The three colored formulas in the Isle of Paradise collection were supposed to solve that problem: The peach shade promises to make the faux glow appear more golden and real-looking on pale skin, the green shade for medium skin, and the purple for darker skin tones. To a jaded beauty editor, it sort of made sense in theory but also sounded like it could have been a complete gimmick.

Jules, please accept my apology. Isle of Paradise is not a gimmick, and the color-correcting technology is the real deal. I used the mousse meant for medium skin tones in a fit of desperation one week when I couldn't squeeze in a spray tan and could not believe how golden and real my tan looked after. I tried to find a photo of myself after I used the tanning mousse but was only able to find two very blurry and slightly incriminating photos of me sitting on a Toyota Camry (don't ask):

And once more, with flash:

Contrary to what you might be thinking, I'm including these photos not to show off my friend's burgeoning photography career or my excellent posing skills (not), but to show you just how even, smooth, and golden my tan is. As you can see, there's not a streak or hint of orange in sight. None! Zero! Bye, Edward Cullen.

I also was blown away by how easy the product was to use. I applied it straight out of the shower using a tanning mitt, and it was easy to spread and dried almost instantly. There's a hint of color right off the bat, but it really begins to develop over the next few hours. Jules says there's no DHC smell, but I did notice a bit at first; it disappeared by day two, however, and was a lot less noticeable than most other brands I've tried. Lastly, I loved that this tan faded evenly and with no flaking or splotchiness. I actually had a spray tan booked for a few days later, and I ended up canceling it because I realized I had the power of a natural-looking glow already in my possession.

Since then, I've spread the word, and the people-pleasing side of me has been happy to find that everyone who's actually tried the product has become just as obsessed. Erin and Hallie on the Byrdie team swear by the peach-toned tanning mousse, and Amanda likes the green drops that you can add to any product to make your skin look more sun-kissed. (I will make a note that I used the tanning water a few weeks later and didn't love it—the color faded really quickly, and it was streakier than I had hoped. But I'll chalk it up to user error and give it another go.) If you're a self-tanning newbie or just want a product that is guaranteed to give you a natural-looking glow à la Summer Roberts, reach for this mousse. I promise it's not a gimmick.