Sienna Miller ranks high on my list of people whose beauty secrets I want to steal—I mean, just look at her. Sure, she might just naturally possess the world’s glowiest skin and shiniest hair, but I’m convinced she must turn to some type of product to enhance her all-around perfection (at least, if the world is a just and fair place). Thus, I practically fell over myself when Jessica Richards—founder of Brooklyn’s coolest indie beauty shop, Shen Beauty—casually mentioned she just started stocking a beauty balm that Miller herself happens to swear by. The balm in question is called Pommade Divine, and it has a fascinating (and long) history.

Originating in France, the name is actually a generic term for all healing balms available to wealthy French citizens, and soon afterward, it spread all over Europe. Making the leap across the pond to America in 1864, where it was renamed Nanny’s Magic Ointment (best name ever?), it grew in popularity and gained a number of high-society fans. In the 1980s, a former Vogue editor was shopping for the healing balm she was brought up on, and she realized—gasp!—that it had disappeared from every shelf. She was distraught. She confided in her husband, and her husband did what any good husband does—he bought her the brand. (File under: desired future-husband attributes.) She recently passed the baton to Ania Macadam, a former employee at Proctor & Gamble, and the rest is history. 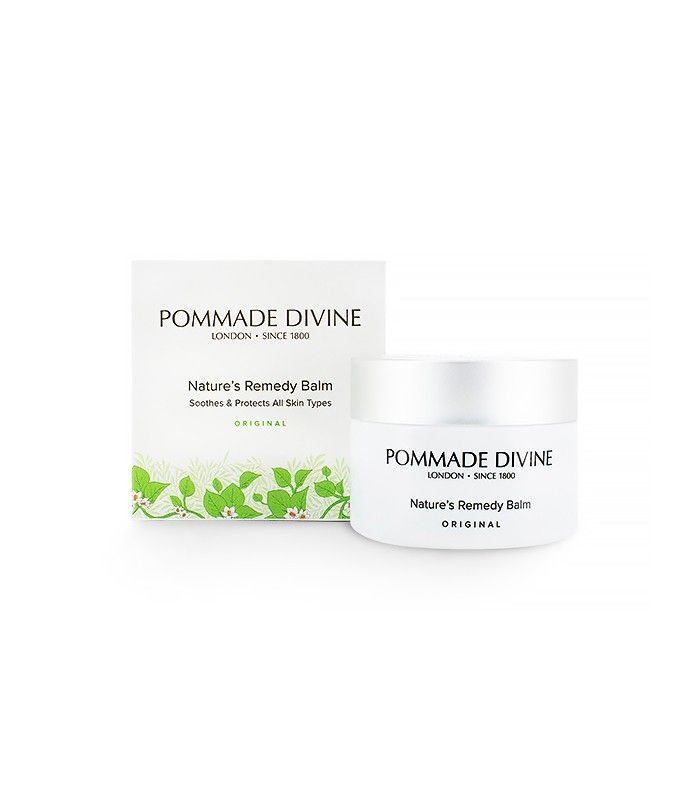 Made with antibacterial ingredients like benzoin and liquidambar, as well as clove, cinnamon, and nutmeg for healing, the 97% natural magic balm promises to treat everything from dry skin to burns, chapped lips, and insect bites. Sienna Miller herself said—and I quote—“I was brought up with Pommade Divine, and now I use it on my daughter. It’s a fantastic product that I always have in the house.” Other fans include makeup artist Jemma Kidd, former rugby players, and even the late dowager duchess of Devonshire, who said, “One sniff and it is straight back to childhood, where it was the cure for everything.” If the late dowager duchess says it’s good…

Richards was kind enough to send me my own jar of the magical balm (as in, she didn’t block me when I sent her an email with a subject line: “PLEASE SEND SIENNA MILLER BALM!!!!!!”). The smell is not particularly pleasant—if you’ve ever used Bag Balm, it smells exactly like that—it’s herbal, slightly medicinal. The balm itself is a golden color and looks waxy, but it melts into an oil wherever you apply it.

I used it on a particularly irritating patch of itchy skin and felt the irritation subside immediately. Yes, perhaps a co-worker made a comment about “the strange smell” in my general vicinity shortly afterward, but I didn’t care—I just quietly screwed the lid back on the jar and tucked my secret product away to use at home. I do admit that the smell takes some getting used to, and it’s not something I was raised with; I might never get used to it. However, I’m adding it to my permanent skincare stash for a rainy day—or rather, a cold winter day when my skin is dry, cracked, and irritated, or a hot day when I’m riddled with bug bites. Plus, I just picture Sienna Miller slathering it on herself and her beautiful golden-haired children, and my Anglophile heart sings—and clutches Pomade Divine all the more near.