In recent years, Benefit has cemented itself as the brand to turn to for any of your brow-based queries. Its fibre-fuelled Gimme Brow ($24) is cited by makeup artists worldwide as their go-to brow fluffer, and its Precisely, My Brow Pencil ($24) finally made creating realistic-looking brow hairs a doddle. And now, the brand is about to shake things up in the brow sphere once more with the launch of Brow Contour Pro ($34)—a four-in-one brow product that looks remarkably like those multicoloured Biros we used in school. 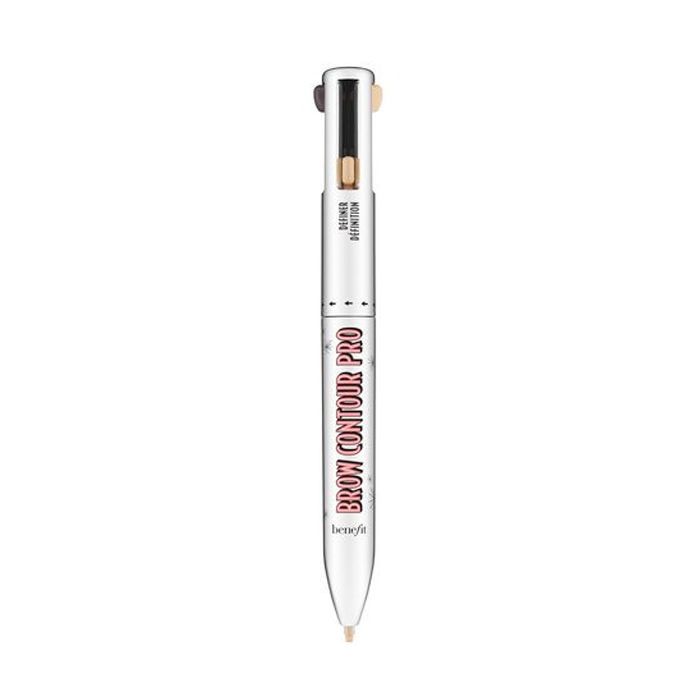 Of course, we should make a special shout-out to Clarins, who was the first to create a Biro-like product with its 4 Colour Pen ($30). However, Benefit's version is set to be revolutionary for a whole extra set of reasons. Ultimately, Benefit's offering reduces your brow kit down to a single product. The new pen has four settings that click into place by pushing the according button at the pen's base. It comes in five colour options, and each pen contains two brow shades (one light and one dark to help create realistic-looking brows), an edge definer and an arch highlighter. The brow definer acts as a concealer you can use for easy cleanup while the highlighter is for drawing attention to the arches. Yes, it's fulfilling all of our fresh, new stationery dreams, but does Benefit's Brow Contour Pro actually live up to the hype? We put it to the test on three sets of brows to find out.

"Just like the pens you used to get as a kid, this four-way gadget is child's play to use. The brow pen contains two shades—a lighter one and a darker one. These help you create a tonal, more realistic look. The definer (a concealer you use around the brow to define the shape) is like a non-shimmery highlighter for the brows."

"The pen is super easy to use. The formula glides on with ease and is seriously blendable. In fact, it goes on so easily that I was a little heavy-handed at first and needed to fish a spoolie brush out of my makeup bag to blend everything in. For anyone who loves a perfected brow look, this is a game changer. Whilst I like it, I prefer fluffy, natural-looking brows. I'm not convinced it can tempt me from my Benefit Precisely, My Eyebrow Pencil ($24) and Gimme Brow ($24), but it came close."

First off, I'm a regular user of the brand's brow pencils (I love Precisely, My Brow Pencil for its super-fine tip). The four crayons inside this whopper of a pen are super soft, so they don't scratch. The pigment itself sets over time, so you won't find your brows smudged across your forehead an hour later. Just as I imagined from this brand, it was easy to get my brows looking the way I like them (feral and full), and I found that having two different shades of brown really does help make them look bushier.

I haven't highlighted the underside of my brows since the late '00s, but now I'm reminded why we all did it in the first place—it really does make the outer edge of the brow look more defined. Thing is, though, I have such wayward brows that finding a boundary line to pencil over with the highlighter was tricky. I kept the edge definer to the very inner corners of my brows to help give clarity to my unthreaded hairs. My only gripe? There's no spoolie brush on the end, so I had to dig around in my makeup bag for a spare one.

"I'm normally a brow gel kind of girl, but if there's one brand that can convince me to try out a brow pen, it's Benefit. The nib of the product is soft enough that you can meld it into a shape that suits you and still looks completely natural. I love that there are two shades of brown to work with, as I sit in the awkward in-between shade that often doesn't exist. I opted to mix the lighter hue with the deeper one to find my perfect brow-colour match."

"I'd probably still run a clear mascara through my brows, though, as I like them to stay in place throughout the day."