I Hated Bar Soap Until I Tried This Luxuriously Creamy Bar

When my editor asked me to try Beekman 1802’s Pure Goat Milk Bar Soap, I was kind of like, “But whyyy…” You see, I hate bar soap. I just think it’s kind of dated. I’d much rather shower with a nice body wash that is packed with actives that are great for my skin and a nice scent than a bar soap that’s going so slip out of my hands and like, congeal in the soap dish overnight. I’ve always felt like we as a society have moved past the need for bar soap.

And I’m not alone! In the middle of 2017, Market Watch published an article titled Millennials Are Killing Bar Soap. And they were probably right. I mean, think about it. How many people do you know who still shower with a bar?

But then this bar soap fell into my lap and there was nothing else to do other than just try it and see. Could my mind be changed? Did I even want my mind to be changed? Keep reading for my honest take.

Best For: All skin types

About The Brand: Beekman 1802 is a collection created around the hero ingredient, goat milk, to help balance skin’s microbiome.

About My Skin: Acne-prone

I’m sure Byrdie is sick of hearing me talk about this over and over again, but I am prone to body acne. But that wasn’t always the case. I had pretty balanced skin my entire life, but when I hit 30, my body was like, “well that’s enough of that,” and started to break out all over—and often.

There were those little red speckles strewn across my back, the ones that seem to live under the skin, as well as the larger breakouts that would actually make it to the surface. My face breaks out every once in a while, sure, but I’ve never dealt with actual acne on my face before, so I didn’t have the first clue about how to deal with it on my body.

After a couple years of getting really serious about treating the body acne and trying to keep it under control, I’m always wary of trying any new products that might throw a wrench in my system.

Okay so for starters, this bar of soap is thick. It’s scarcely smaller than the size of a brick, and really satisfying to hold in your hand.

The lather that it creates in the shower is also thick. I was pleasantly surprised at how this foamed up as I washed, and how nice it felt. It’s formulated with goat’s milk which matches the pH level of your skin to nourish and deeply moisturize. It works itself up to a rich, silky lather that feels amazing on skin and is almost as if it’s softening more and more each second as you wash (and that’s because it is).

It’s rare that I’ll use a body cleanser and feel like it immediately softened my skin. I’m not saying it’s unheard of, it just doesn’t happen often. This bar soap is one of the few exceptions to that rule. Also, unlike some soaps that have a deceptively rich lather that only seems to leave skin tight and uncomfortable, this one doesn’t strip skin after you’re all rinsed off.

One thing I will say, is that this bar soap feels very softening and slick on skin, but it also feels the same way on your shower floor, so be careful. As I showered, I could feel the floor of my shower become noticeably more slippery as the suds ran off my body and down the drain. I had to consciously make sure I didn’t slip and fall, so keep that in mind. It may seem like a silly thing to call out, but it was noticeable enough to put into this article. 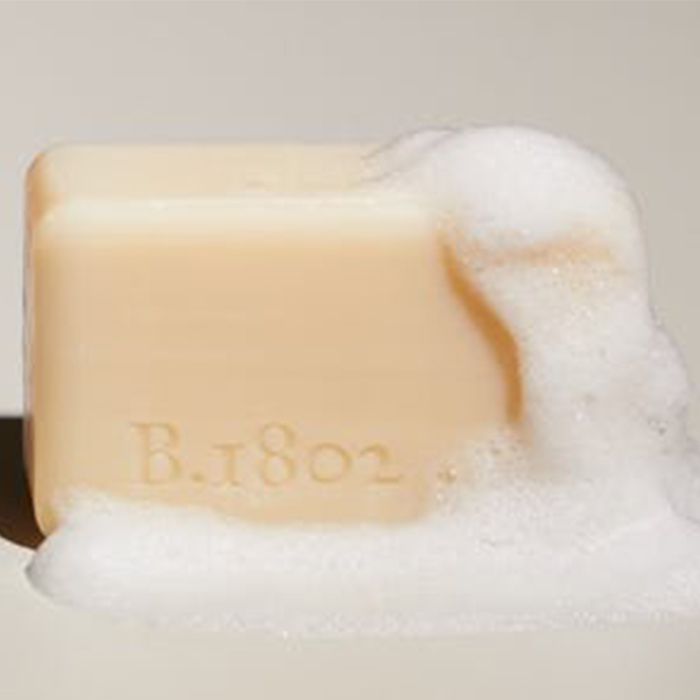 The Value: As solid as the soap

So, again, I’m not a bar soap connoisseur here, by choice, but as products go, this one is a great value. You get a nine-ounce bar of soap for $10.50. If you ask me, that’s pretty good. Also, the soap is triple milled, so it takes you a long time to work through, ensuring that you won’t be just washing away your money.

Our Verdict: Okay, you sold me

Honestly, I did not think I’d find myself here, but I have to admit I like this soap a lot and I will be keeping it in my shower. Full disclosure, I won’t be reaching for it every single day, because, as I said, I’m committed to my products that have proven to keep my skin clear, but, this will definitely be in my rotation. It’s just such an easy way to create an immediate luxury experience. And this is going to be amazing during the colder months when my skin is extra parched and in need of some TLC. (Honestly, after writing this, I want to hop back in my shower and use it again.)