If a product is buzzy, effective, and sought-after by beauty industry experts, then chances are it's sold by Violet Grey. The beauty retailer offers a community of editors, makeup artists, estheticians, dermatologists, and influencers who vet each product—70% of whom must recommend the formula before Violet Grey will stock it. This community reviewing process is designed to give consumers assurance that the products they're shopping are, for lack of a better word, legit.

That brings us to this little-known vitamin C treatment. It was completely sold out in less than 24 hours after launching. Yup, that means it was approved by the experts and real-life customers. Keep scrolling to see which vitamin C product it is (and how it can reduce the appearance of pores, fine lines, wrinkles, dark spots, and even redness). 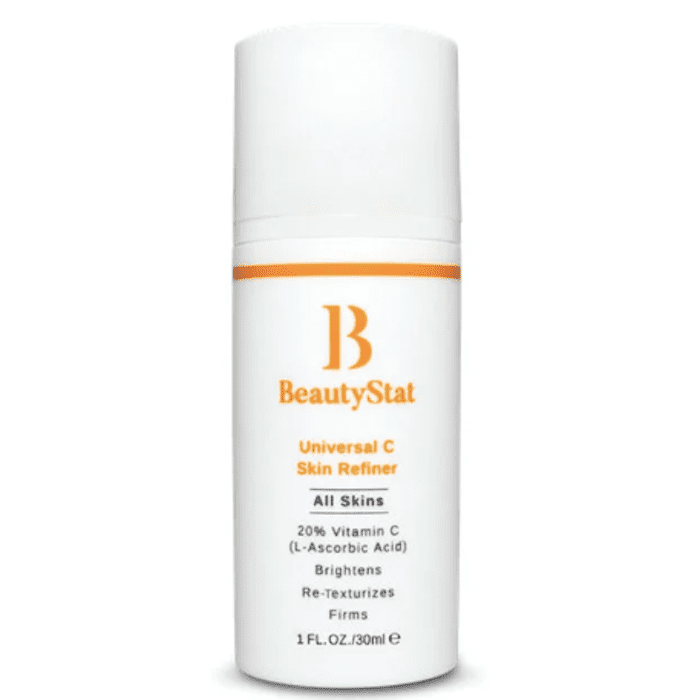 The product in question is the Universal C Skin Refiner by the brand BeautyStat. It's designed to be used as any other vitamin C serum. Use it both in the morning and at night, after cleansing and before moisturizer application. Unlike other vitamin C serums, though, it doesn't deliver the vitamin C in a liquid form; instead, it has a gel-cream texture that sinks into the skin, making it feel plump and velvety. As the Violet Grey website reads, "the satiny texture smooths and hydrates without leaving behind a slippery residue, making it easy to layer under makeup."

While the application and the texture are both important aspects of a product, the formula is what matters the most. The Universal C Skin Refiner's formula is unique, in that it contains 20% pure L-Ascorbic Acid, which is one of the highest levels of pure vitamin C available in an over-the-counter product. What's more is that it's a stable form of vitamin C, which means it doesn't degrade (and thus become ineffective) when it's exposed to light and air the way other unstable forms of vitamin C might.

This one stays pure and potent, thanks to the brand's unique encapsulation process. "We have 3 patents on the ability to encapsulate pure vitamin C so that it does not degrade or oxidize (many competitors turn orange-brown due to oxidation)," explains Ron Robinson, BeautyStat's CEO, founder, and cosmetic chemist.

Along with the high concentration of stable vitamin C, the Universal Skin Refiner is formulated with EGCG, which stands for (get ready) epigallocatechin gallate. It's the most active component in green tea. It works in tandem with vitamin C to defend against free radicals, which wreak havoc by weakening and aging the skin. There's also squalane, which is a hydrating ingredient derived from olive seeds, and tartaric acid, which increases the product's overall absorption.

Luckily for us, Violet Grey has since restocked the Universal C Skin Refiner. It's available for purchase now. While you wait for your order to ship, learn all about ampoules, and whether or not they're actually good for your skin.