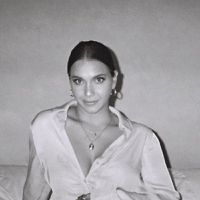 Kate is a beauty writer, copy editor, and brand strategist based in Southern California. She has been contributing to Byrdie since 2020.

The way I speak about my body changed overnight. The drastic shift didn't come through some revolutionary realization in my weekly therapy or by watching body-positivity campaigns on Instagram. Yes, I was influenced, but not by your usual influencers. Three little girls, all under the age of four, who have no idea what social media even is are the ones who did the influencing—my nieces.

The change didn't happen magically the moment they were born. It came one night, three years later, when I was getting one of them ready for bed. I left the room to grab pajamas and returned to find her standing in front of the full-length mirror, her eyes lingering as she admired her little body. I watched as she twirled in the mirror, running her fingers through her hair with the biggest smile. At that moment, I had a thought that continually crossed my mind ever since: I can't remember the last time I looked in the mirror at myself and felt the same joyous excitement.

Beauty standards aren't a new concept to women—they've been integral to our history for decades. Be slim, but not too slim. Be thick, but not too thick. Everywhere we look, we are bombarded by guidelines that deem what it means to be beautiful. These guidelines begin at a young age and seem to follow us our whole lives. According to NEDA, young girls start to express concerns about their weight or shape by age six.

Growing up playing competitive basketball, I was more concerned with being strong than I was about being skinny. It wasn't until after a knee injury forced me out of organized sports and propelled me into a one-time beauty pageant experience that I started to become hyper-aware of my body. I was 17-years-old when I walked down a runway in a barely-there-bikini and four-inch heels in front of a television audience with my family and my high school boyfriend's family in the front row.

Once I got backstage after my walk, that seemingly confident teenage girl onstage quickly melted away. Surrounded by signed models getting their makeup airbrushed while they nibbled on small pieces of pita bread, I began to feel extremely out of place with my Lancôme mascara in one hand and half a sandwich in the other. That was the first time I ever truly questioned my weight, and I began to feel frustrated. These feelings of self-bitterness stuck with me throughout my twenties.

I often think of my teenage self, wondering when was the last time I looked at my reflection in the same proud way my nieces look at themselves now. I wish I had a body-positive anthem back then, like Jax's "Victoria's Secret" that went viral on TikTok earlier this year. And if I ever had the chance to talk to her with the knowledge I have now, it may go something like this:

I'm not sure when the exact moment was that we should have started admiring our body again. The truth is there is a point in our life when we stop becoming the biggest fan of ourselves.

It hasn't always been this way, though. Before social media and before the first time we ever heard a teenage boy refer to our legs as thunder thighs, we loved our body. To a fifteen-year-old athlete, those thighs meant strength. Those strong legs made us run faster than all the boys, and we loved them for it.

Somewhere between then and now, we stumbled. But even though we were stumbling, our body wasn't. Our body was still working, breathing, pumping blood to keep our heart alive.

If the only thing our body does is put one foot in front of the other, allow us to run into the arms of loved ones, and give us the strength to lift our nieces and nephew high—those are the standards we should care about.

Despite the constant berating and mean thoughts that became a comfort zone built inside our discomfort, our body never gave up. For that alone, we should become its biggest fan sooner rather than later. Your body, my body, this body is enough. It'll always be enough.

I can't return to my younger self to take away some of the pain that happened while trying to be comfortable with my body. But I can continue to speak kinder words about it now because I have three pairs of eyes and ears watching and listening to what I do and say. When those three little girls become grown women one day, I hope they look in the mirror and still linger for just a moment in awe of how beautiful they are—just like they did when they were three-years-old.