The Dangers of Turning Insecurities Into Beauty Trends

It’s time to talk about it. 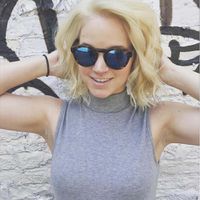 Emily Rekstis
Emily is a freelance writer, editor and content creator. She has contributed to Racked, Fashionista, BuzzFeed, The Cut, and more.
Byrdie's Editorial Guidelines

In January, dark under-eye circles became the beauty trend no one saw coming, thanks to TikTok creator Sara-Marie Carstens. "I spontaneously decided to pick up my lipstick and redraw my own dark circles, which I previously covered with concealer," Carstens explains. "I basically wanted to show everyone how cool dark circles can look." Embracing and celebrating her dark circles was Carstens’ way of reclaiming the narrative around this insecurity that she struggled with most of her life.

However, the clip was quickly criticized by many, including Siddhi Uppaladadium, who told the New York Times she found the video off-putting. "People of color always have these dark eye bags because we’re more prone to hyperpigmentation," she told the publication. Uppaladadium compared it to the fox-eye makeup trend, which is offensive to people of Asian descent due to the elongated eye shape it creates.

This type of insensitivity and oversight is exactly the sort of thing that happens when beauty insecurities are turned into beauty trends. Unfortunately, trends happen quickly, and it doesn’t give people a lot of time to research before jumping on the bandwagon. And at this point, we should know that it’s always important to understand exactly what you’re promoting, where it came from, and how people feel about it before giving it any traction.

The intention is a good place to start, but it is not the end-all-be-all. Clearly, Carstens had nothing but good intentions. Some makeup lovers don't realize the insensitivity around calling "fox eyes" a trend. But that doesn’t erase the many marginalized communities vocalizing their varying thoughts and opinions. This is yet another example of intention versus impact.

Meanwhile, skin positivity blogger, Katie Guber, says it’s not necessarily the fox eye makeup look itself that feels icky. It’s the action of pulling one’s eyes outward that rubs her the wrong way, which is a motion many people did on social media when showing off their creation of a fox eye look last summer.

"If we're talking about thoughts I've had where people are actually using their hands to pull back their eyes, that directly reminds me of how people would make fun of Asians in America for having more narrow eyes," she explains. "But I think the cat eye itself or the smolder look when you’re modeling, like a smize, isn't directly being racist."

With many more nuances, thoughts, and opinions circulating just this one-eye look, it’s easy to see why it’s important to have the conversation and do the work before posting a video of yourself putting on eyeliner. Then, once you’ve listened and understood all sides to the argument, it’s up to you. "We ourselves have to make our own critical judgment," Chen tells us.

How Brands Perpetuate the Problem

There’s also the idea of carefully curating the representation you’re attempting to normalize. Even though dark under eyes is an insecurity Carstens has always struggled with, what the public saw wasn’t her natural dark circles. We saw a version of her insecurity created through makeup. This approach to normalizing traits is something we see from larger companies all the time.

Brands may claim their "inclusive" clothing line is for everyone or their acne products deliver real results, but they’re still maintaining ownership of the narrative in reality. Naturally, it’s a curated narrative that suits their monetary needs over the needs of the individuals buying the products.

"I just came across [a skincare ad] earlier this week that had photoshopped the model’s skin to be poreless, but then also photoshopped pimples [onto their skin]," Mik Zazon, founder of #NormalizeNormalBodies, says.

This is a slight Guber has also noticed. "Companies that want to advertise acne products for people use them on people who already had great skin." So instead of questioning the product’s efficacy, she would question her own skin.

Our Responsibility as Individuals

Luckily, brands and larger media organizations don’t hold all the power anymore. Of course, they still police a large portion of what we see, but individuals have more influence than ever, thanks to social media. Before the modern digital age, media was monitored by a select few gatekeepers who determined what society valued and saw as attractive. Now individuals are giving them a run for their money.

"I understand media and entertainment are big, it's a huge sector, and it has a huge influence," social activist, motivational speaker, and body confident activist Harnaam Kaur says. "But I feel that sometimes we forget our own power as well." Not only does Kaur believe that individuals have the power to create noise when brands are doing it wrong, but she also believes the internet gives people the power to share their narratives on their own terms.

Plus-size fashion influencer Alysse Dalessandro Santiago agrees. "I am the platform I needed as a kid," she says. "Social media has now empowered a lot of people to be able to take back the narrative."

But with power comes responsibility. We’re the first generation to navigate the complicated paths that come with having a voice. It can be easy to fall into bad habits when you think no one is watching.

"You have a platform that then influences other’s thoughts and opinions, and it does shape our culture in a lot of ways," plus-size fitness influencer Kanoa Green says. "There is a lot of responsibility attached to that." Even she has to remind herself of this from time to time. "How I talk about body positivity and self-love and self-confidence today is different than it was six years ago," she explains. "I constantly have to check that because it's so easy to fall into the trends and the hashtags and the trending phrases."

You have a platform that then influences other’s thoughts and opinions, and it does shape our culture in a lot of ways.

Kaur points out labels are important when creating a space for marginalized people, but the meaning behind the words can easily get lost when used for the wrong reasons. "Labels are very powerful, but they can also sometimes take you away from the core, the truth, and the actual intention of why you're doing something. I think sometimes we can get too caught up in labels and actually forget what we're advocating for."

Take the body positive movement, for instance. Being inclusive and #BodyPositive became a marketing tool. Thus, the messaging behind the body-positive movement—created by Black activists fighting against size discrimination—can be watered down by the time is reaches the public.

Santiago explains the core of body positivity goes beyond how someone looks. It’s fighting against size discrimination, like how a person is being valued at work or treated in the doctor’s office. She says that what most brands and influencers are selling is really just self-love. "It’s a worthy pursuit, but you have to think beyond yourself if you have a larger platform."

The Effect of Turning Insecurities Into Trends

The issue of turning insecurities into trends pretty much boils down to the fast-paced speed at which trends take place. Not only does it give people a short timeline to do the work, but it also puts a timestamp on the appeal of certain traits. "Turning beauty insecurities into trends tells people their insecurities will be accepted, and then when the trend dies, society goes back to having the same unrealistic beauty standards it did before," Peter DeVito, a photographer who uses his art to celebrate natural beauty, tells us.

When one is working to normalize certain traits, it involves years of growth and acceptance, starting with individuals before it can push its way into society as a whole. "Normalizing certain traits is a consistent effort that takes place until the traits are considered normal by society," DeVito continues. "A trend is something that is fleeting, and these traits should always be accepted."

Turning beauty insecurities into trends tells people their insecurities will be accepted and then when the trend dies, society goes back to having the same unrealistic beauty standards it did before.

We live in a world that values beauty, and not everyone is comfortable in their skin. When all of society tells you that a common, real trait is a flaw, it’s easy to believe it and internalize it. However, when you can’t "fix" that flaw, it can start to affect your mental and possibly, physical health. So no matter how superficial you may feel an issue surrounding beauty is, it’s important to recognize physical appearance carries weight when it comes to people’s well-being.

"Beauty is so much a part of our culture," Guber says. "I in no way want to erase anything; I just hope we can be more accepting." That’s why it’s important to advocate for self-acceptance alongside new definitions of beauty.

Meanwhile, trends—and the making of trends—could stand to be more thought-out, better-intentioned, and free of appropriation. Until we can truly figure that out, maybe it’s best to steer clear of calling things "trends" and instead spend time celebrating the beauty of marginalized communities and the individual.