June is Pride Month, which means we're in the midst of the 30 days of celebration of LGBTQ+ communities. Some of the celebrations have already happened (LA's Pride Parade took place last week) and some are yet to come (New York's Pride Parade takes place on June 30). It's important to remember, though, that Pride should extend far past June; it should happen year-round. In fact, I think about Pride the same way I think about Earth Day (hear me out). We should be eco-conscious every single day of the year, but that doesn't mean I'm not going to reaffirm my values and partake in some supportive actions on that specific day—see what I mean?

One of those supportive actions we can commit to this month is shopping. Seriously, though. There are a number of beauty brands supporting LGBTQ+ Pride through special campaigns and donations, and by shopping these brands' products, you're also contributing to the cause. Keep reading to see which brands are taking part in Pride. 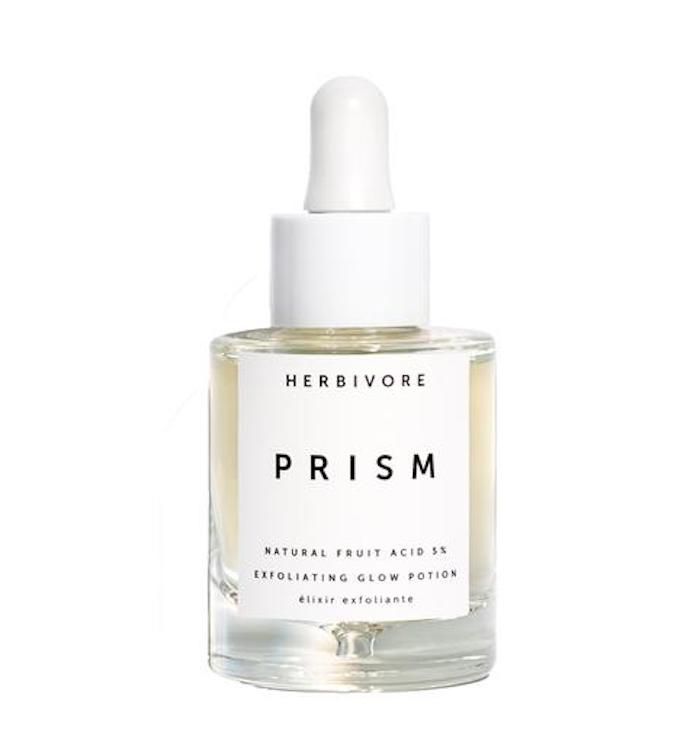 If you aren't already familiar it, PRISM Exfoliating Glow Potion is (you guessed it) an exfoliating serum that's named after the "rainbow" of fruit acid that it contains. Think fruit acids from bilberry, sugar cane, orange peel, apple, and kakadu plum, which work together to unveil brighter, smoother, and clearer skin. Rose water, aloe, and sodium hyaluronate soothe and hydrate the skin. 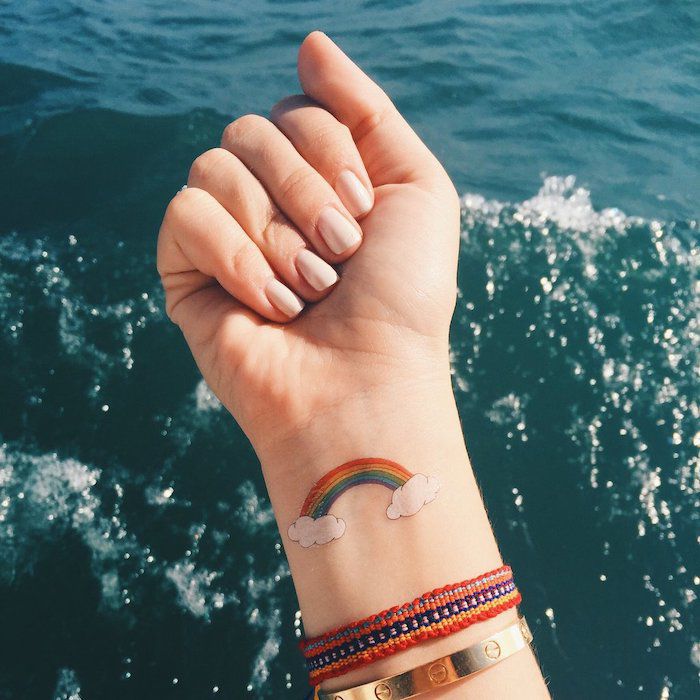 Remember when you were little and you'd get a temporary tattoo, press it onto your skin with a washcloth (and maybe the help of a sibling or parent) and then proudly show it off for a day or two, before it would begin to crumble away? INKED By Dani takes that experience and modernizes it, making temporary tattoos for grown-ups (some of them look insanely realistic).

15% of the sales from this Psychedelic Glitter Set, which includes a glittery rainbow and mushroom tattoo, will be donated to the Trevor Project, which is a leading organization that provides crisis intervention and suicide prevention services to LGBTQ+ youth. Not only does it go to a good cause, but we think they're the perfect beauty accessory to show off during NYC's upcoming Pride Parade. 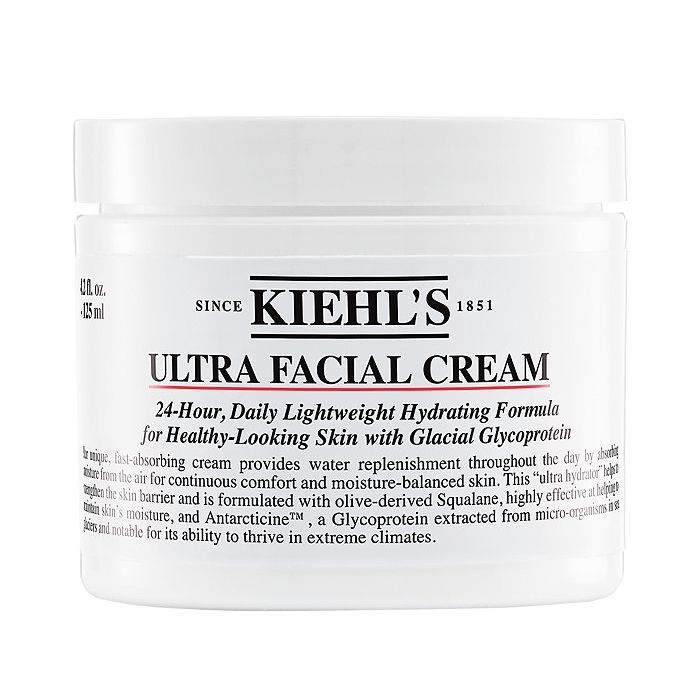 Kiehl's has been supporting Pride Month and LGBTQ+ communities, as well as HIV and AIDS research for years now. This year, the brand has partnered with artist Daniel-Gray Barnett to design limited-edition Pride packaging for some of its products (including the iconic Ultra Facial Cream). Kiehl's will donate proceeds from the collection to various LGBTQ+ foundations, including NYC Pride and the Hetrick-Martin Institute. 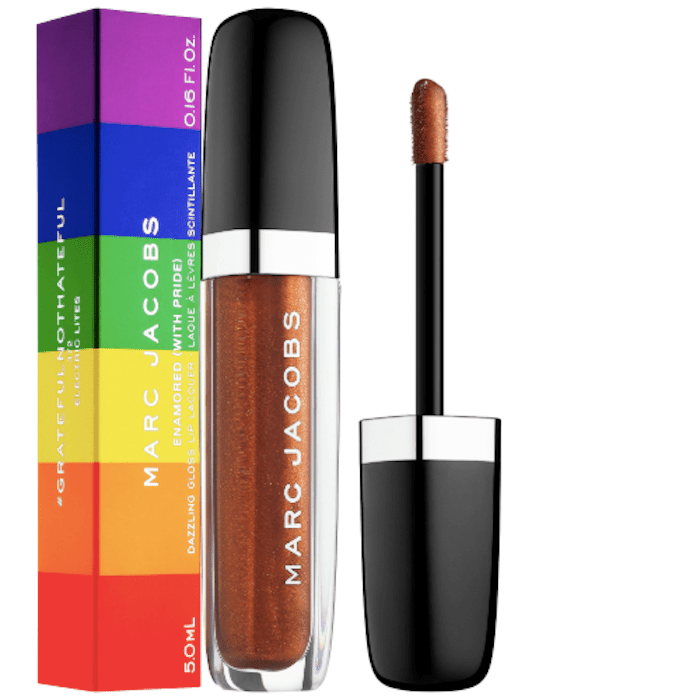 Marc Jacobs celebrate his own wedding earlier this year to Char Defrancesco. To celebrate love, and pride, he released six brand new shades of Enamored Lip Lacquer (the original collection has reach best-selling status). Throughout Pride 2019, the glosses will be available in limited-edition rainbow packaging. More importantly, 10% of the retail price of gloss that was sold between June 6 and July 10 was donated to SAGE, an organization that provides services and support to older members of the LGBT community.

Also be sure to catch Marc Jacobs' new documentary, titled Celebrate (With Pride). It follows the course of three weddings of same sex couples, including his own. The other two same-sex couple received wedding makeup courtesy of Marc Jacobs makeup artists. Plus, a video crew was on hand to capture their stories and their nuptials. 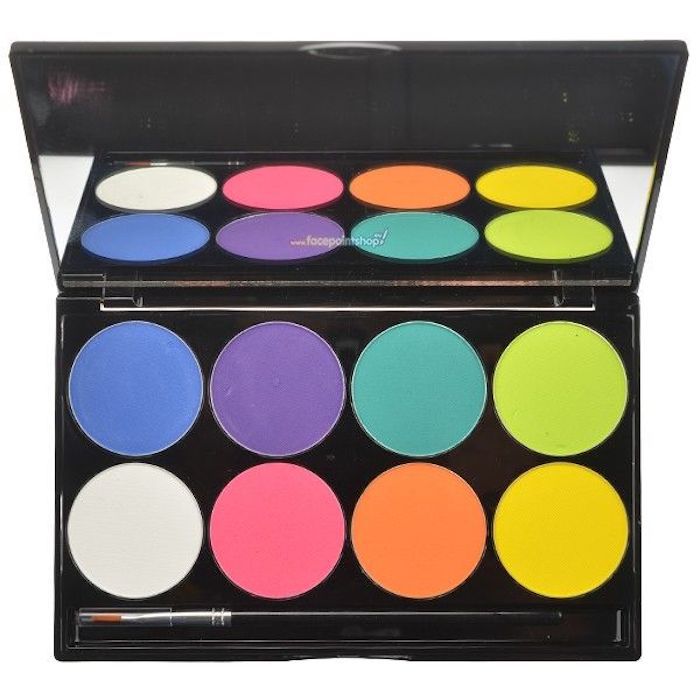 Mehron is celebrating Pride Month by putting some of its most colorful products on-sale, as well as donating a portion of the proceeds to the Ali Forney Center, which is the nation's largest agency devoted to supporting LGBTQ+ homeless youth. Mehron even created a special webpage dedicated to the products that are included in this donation and sale. Head over to it in order to check out every single Mehron product that's included (happy shopping). 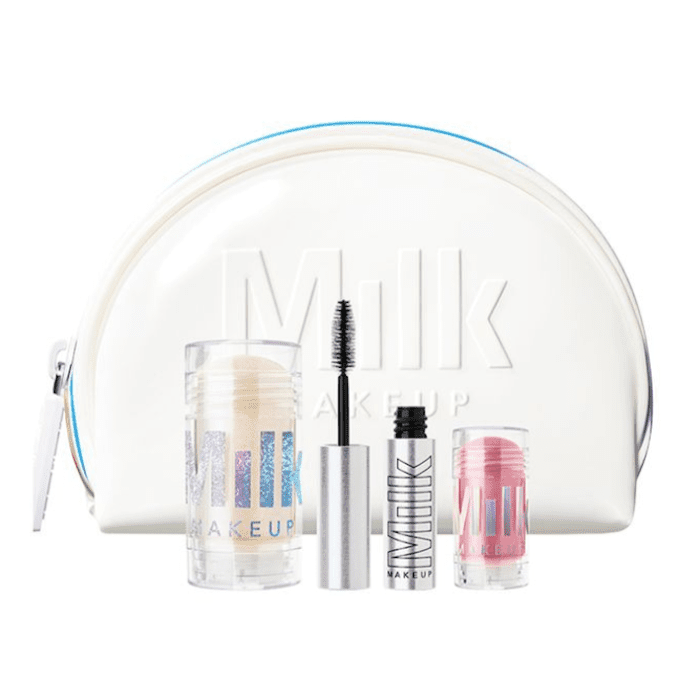 Milk Makeup's Wear Your Pride Set contains three mini products. First, there's the Techno Glitter Stick, which is a highlighter that has a balmy texture and finely-milled pieces of rainbow glitter inside. Wear it on your cheekbones, eyes, lips, or wherever you want a lot of shine and sparkle. Next, there's the Deluxe Kush Mascara, which amps up lashes with hemp-derived cannabis seed oil, packed pigments, and lengthening fibers. Finally, there's the Mini Holographic Stick in Stardust, which is a glow-inducing holographic-pink balm that hydrates the skin with mango butter and coconut oil.

For the third year in a row, Milk Makeup will be donating 100% of the net proceeds of the Wear Your Pride Set (up to $50,000) to The Lesbian, Gay, Bisexual & Transgender Community Center, which is otherwise known as simply "The Center." It's a New York-based organization that support LGBTQ people. 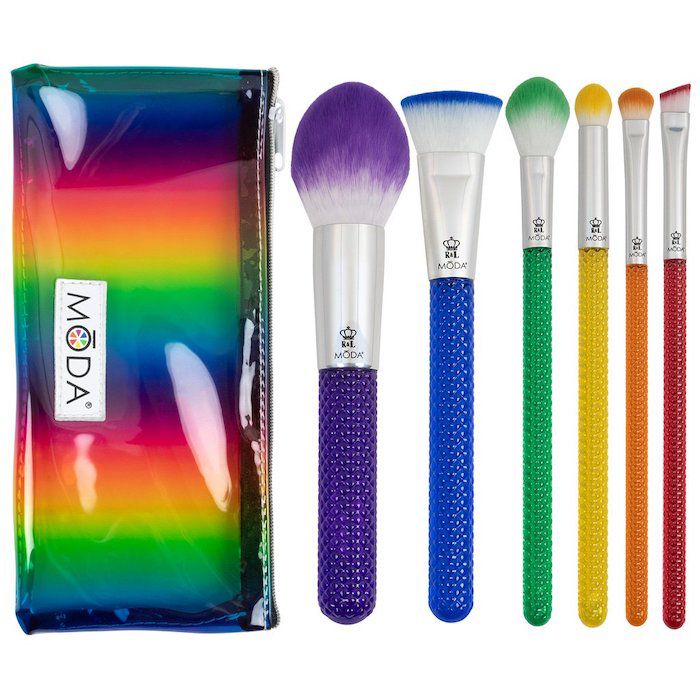 MODA Brush released this limited-edition 7 piece brush set in honor of Pride Month. $2 from every Rainbow Kit sold on Modabrush.com will be donated to True Colors United, which is a non-profit organization that combats youth homelessness—specifically LGBTQ+ youth homelessness. They'll be doing this until June 2020, so keep MODA in mind for gifting to friends and family all year long. It's shopping (and gifting) for a good cause. 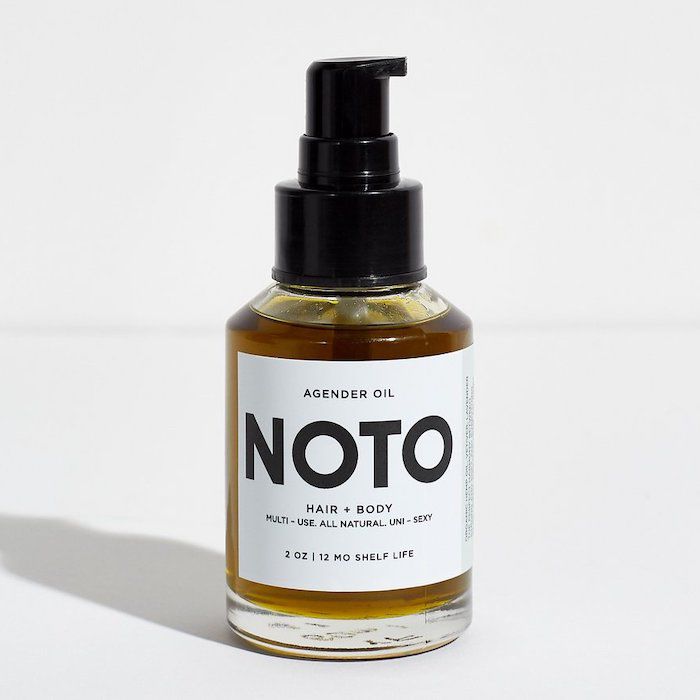 This brand was created by queer makeup artist, Gloria Noto. The brand is donating 100% of its profits (yes, all of them!) to a "rotating list of organizations" that focus on improving the lives of LGBTQ+ folks. It's not just happening during Pride Month, though; the brand will be donating its profits all year-round!

The Agender Oil was formulated by Noto to work as a hair oil and body oil in one. It uses organic hemp seed oil, vetiver, and sweet lavender to soften skin and hair and provide it with nutrient-rich hydration. Use it anywhere you want. As it states on the website, it's "great for giving special friends a massage." 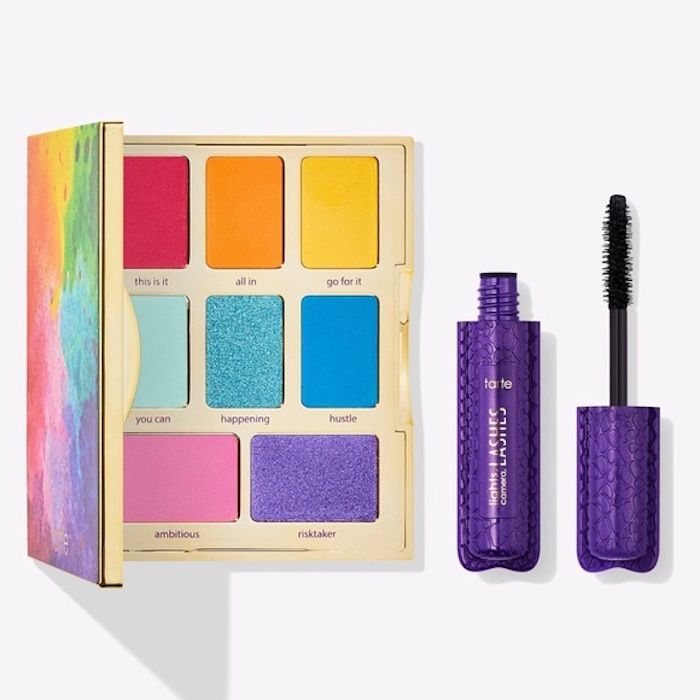 The Let it Rain-bow Eye Set includes a colorful eye palette (just looking at it makes us want to swatch it right now) and the brand's iconic mascara. It was born from a collaboration between Tarte and influencer Jessie Paege, who is a member of the LGBTQ+ community. Your purchase of it will support The Trevor Project. 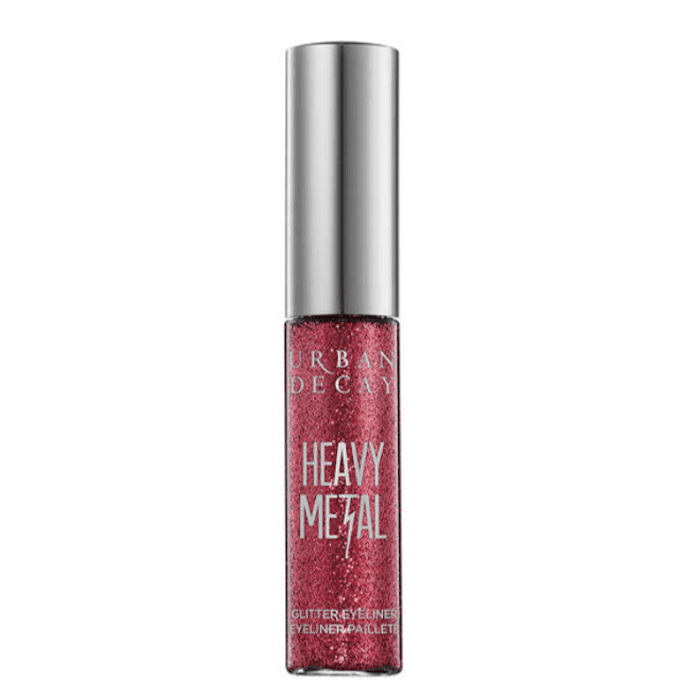 Urban Decay's Heavy Metal Glitter Eyeliner has been met with much aplomb, thanks to a bold, sparkly finish that's easy to control and apply (there's no messy fall-out involved). Plus, the super fine glitter won't irritate the sensitive eye area like other chunkier products do. If you purchase the shade "Stonewall," which is a red-pink color, 25% of the proceeds will be donated to The Stonewall Foundation, which supports the LGBTQ+ movement by supporting other organizations, projects, and scholarship programs. 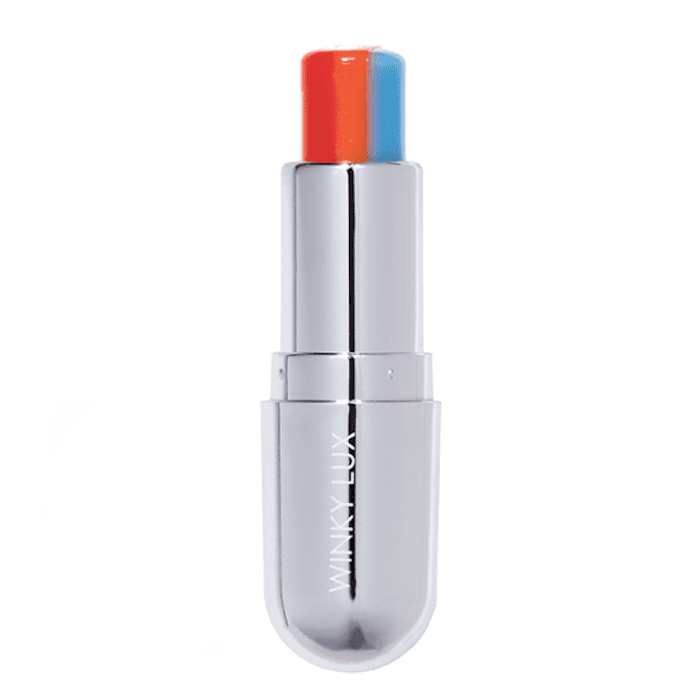 One of our favorite lip balm brands, Winky Lux, is also supporting Pride Month by releasing a limited-edition Rainbow Balm with three stripes of color. The red and orange stripes are tinted, while the blue stripe is pH-activated, which means it reacts with the chemistry of your lips and provides you with a unique wash of rosy-pink color. The three stripes combine to give your lips a subtle, sheer, and flattering look. It gets even better when you know that 10% of your purchase supports nAGLY, which is an organization that provides safe space, education, and a sense of community for LGBTQ+ youth.

Youth to The People 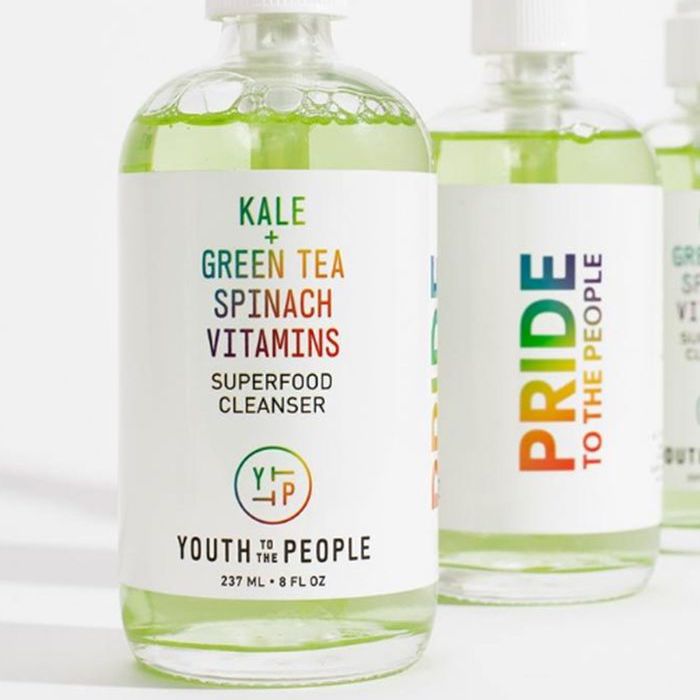 We must talk about this brand's beloved Superfood Cleanser. It has a foamy, lightweight texture that clears the skin of dirt, makeup, and oil, while benefiting it with superfoods like kale, spinach, green Tea, alfalfa, and vitamins C, E, K (it's basically a green juice for your face). It now comes in brand new, limited-edition packaging for Pride Month. If you purchase a bottle, 100% of the profits (up to $50,000) will be donated to GLSEN, which is an education organization working to create safe and inclusive schools for LGBTQ+ students.

Next up, check out our exclusive interview with actor Lauren E. Banks, in which she talks about the importance of meditation and celebrating her natural hair.