You Won't Believe What These Top Beauty Brands Were Almost Called

For beauty editors, one of our secret favorite pastimes is to think of what we would call our beauty brand if we ever had one. This game, however, is surprisingly difficult. The name has to be catchy but classy, modern yet timeless. Racking your brain for the perfect beauty brand name really makes you appreciate the good ones that are already out there.

When an entrepreneur starts thinking of a name for their brand, the best-case scenario is that it comes to them quickly and organically. Take Too Faced, for example. As Jerrod Blandino, the brand's co-founder and chief creative officer, says, "I got the idea for the name Too Faced while working behind the makeup counter in the mid-'90s. I became obsessed with those women who would turn from sweet to sour and have a total meltdown if we were out of their must-have lipstick or favorite mascara. I loved how they were totally committed to their look. They were too glamorous, too fabulous, too beautiful—they were too faced. No other names were ever considered."

But thinking of a great brand name is not always this easy—and we have evidence. We got in touch with eight beauty brands with intriguing monikers and had them spill the alternative titles they considered at the start. Trust us when we say they are fascinating (and make us feel much better about our own struggles to think of a good name). 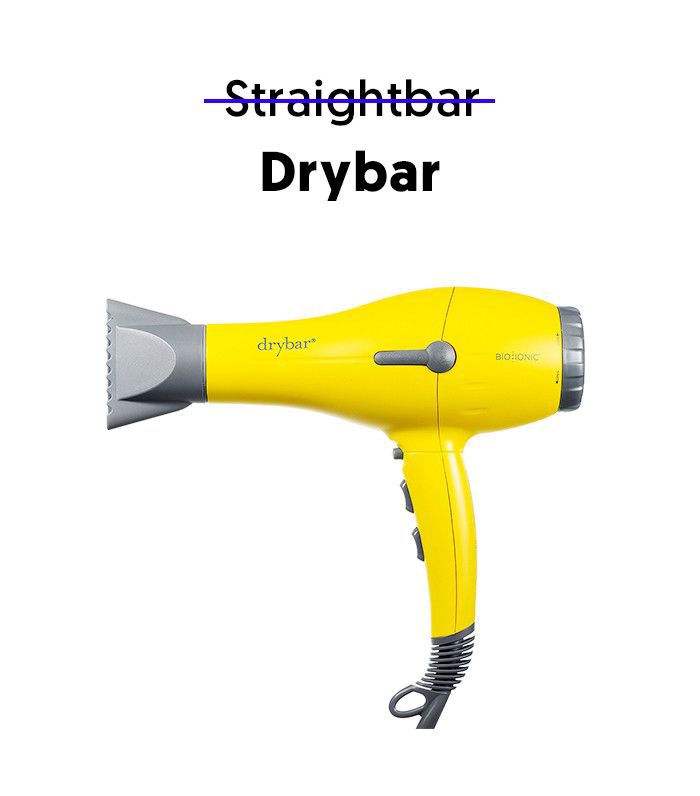 "Most people don't know that Drybar was almost called Straightbar. The reason is, the way Drybar started was I was operating a mobile blow-dry business. And the mobile blow-dry business was called Straight at Home, and Drybar was what would become the spinoff. Because I had a lot of clients in L.A., I wanted them to know that Drybar was connected to that. So we thought Straightbar would be so cute. But obviously, you can see why that wouldn't work. Bad on so many levels. However, we still own the domain name. So if you want it, we own it." — Alli Webb, Drybar founder 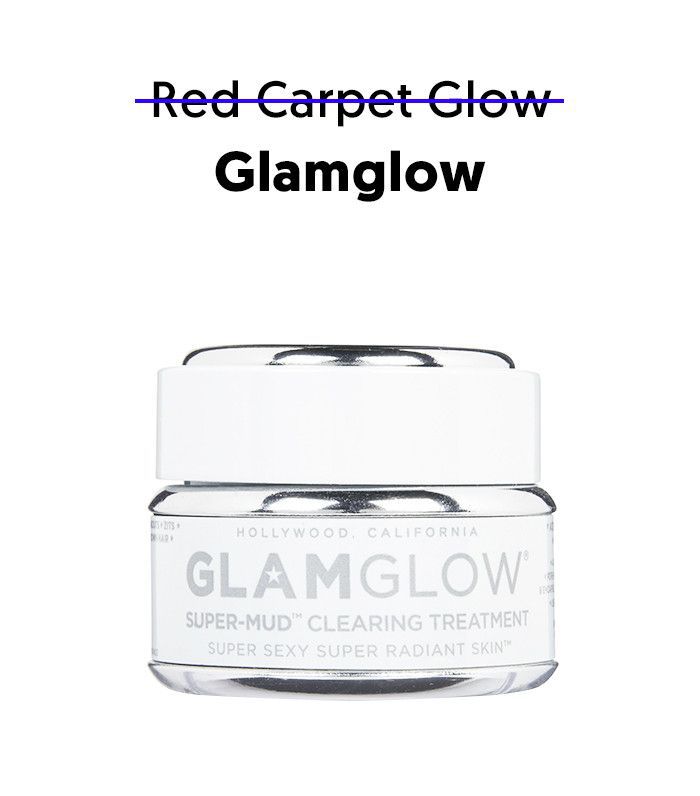 "The first name we came up with was Red Carpet Glow, which spoke to the red carpet glamour of Hollywood, but [my co-founder] Shannon and I knew that name wasn't good. The essence of what it stood for was good, however, so that's where we started. We then sat down with a piece of paper and wrote down all the ways the original mask Youthmud makes you feel: wonderful, amazing, glamorous, glowing, incredible were all words on this list. After coming up with all of these words, I drew a line down the middle of the paper, and we started putting part of different words together. The goal was to create a word that didn't exist.

"We tried Wonder-Glow, Amaze-ful—a ton of different combinations before finally combining glowing and glamorous to be Glowglam. We sort of liked that and thought we were onto something, so we swapped it around to be Glamglow and instantly knew that was it. The name captured the essence of the brand perfectly. When creating the logo, I wanted the words to be together but separate too, so when you look at the logo, you see that "Glam" has a bolder font and a small star in the middle of the A, which gives you a subconscious feel for Hollywood, where our products are made and where we are located. We also put Hollywood, California, above the name for the same reason. People around the world would know where Glamglow is from and what we stand for!" — Glenn Dellimore, Glamglow co-founder 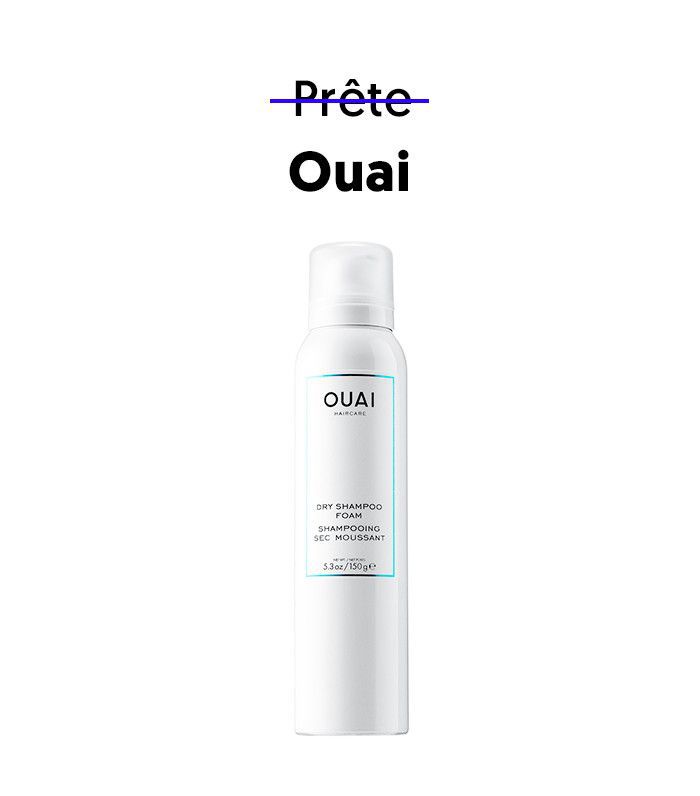 "Paris is one of my favorite places in the world. It's where my husband and I had our first date and where we got married. I love French culture, products, fragrances, and fashion. Prête was one of the other names I considered. But the name Ouai comes from the casual, Parisian way of saying yes. It's about saying yes to being that effortlessly cool girl, the modern French woman on the go who looks like she did nothing but still looks flawless. I also wanted it to be a conversation piece, so you can be the friend at lunch correcting your friends on the pronunciation." — Jen Atkin, celebrity hairstylist and Ouai founder 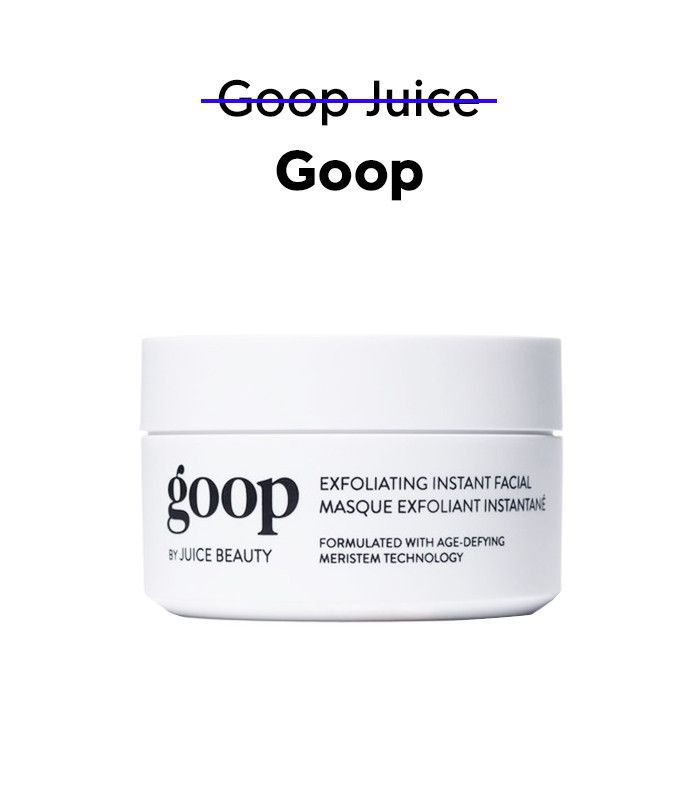 "Goop is a play on Gwyneth Paltrow's nickname (GP). The skincare line was our first Goop-branded product, and it really embodied all of the tenets of our brand: It was nontoxic, luxurious, meticulously researched, and über-curated. So the naming process was pretty simple. Plus, skincare kind of looks like goop—this just happens to be really good goop. The only other name considered was Goop Juice, but it was quickly squashed!" — Blair Lawson, Goop head merchant 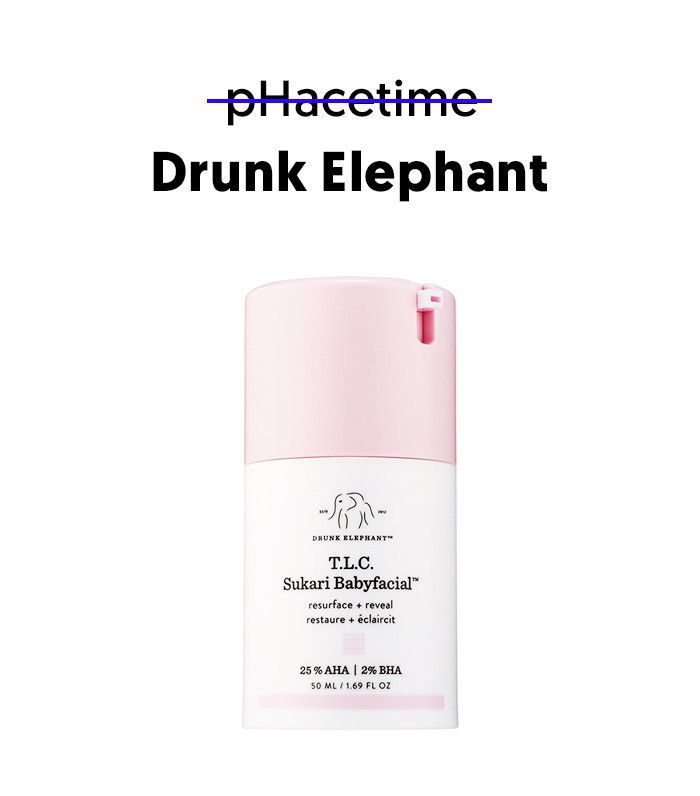 "It took me a long time to come up with the name, and I remember every good idea I thought I had and got excited about was already taken. One of the available names I considered early on was pHacetime. I had already found the marula and knew it was going to be threaded throughout the entire line, in addition to being its standalone moisturizer. And I had seen the video on YouTube of the elephants eating marula fruit and getting tipsy, so that was in the back of my head.

"It came to me like, I can't call it Drunk Elephant, can I? I said that to a few friends—a few said Yes, you can! but some others said No way. It was controversial from the very beginning, and the reaction I was getting sort of sealed the fate of it. I realized at some point that it hit every right marketing note I could think of: immediately captured people's curiosities, made people ask what and why and, once understood, would never be forgotten. I was told early on to change the name, and it turns out it's one of my most valuable assets." — Tiffany Masterson, Drunk Elephant founder 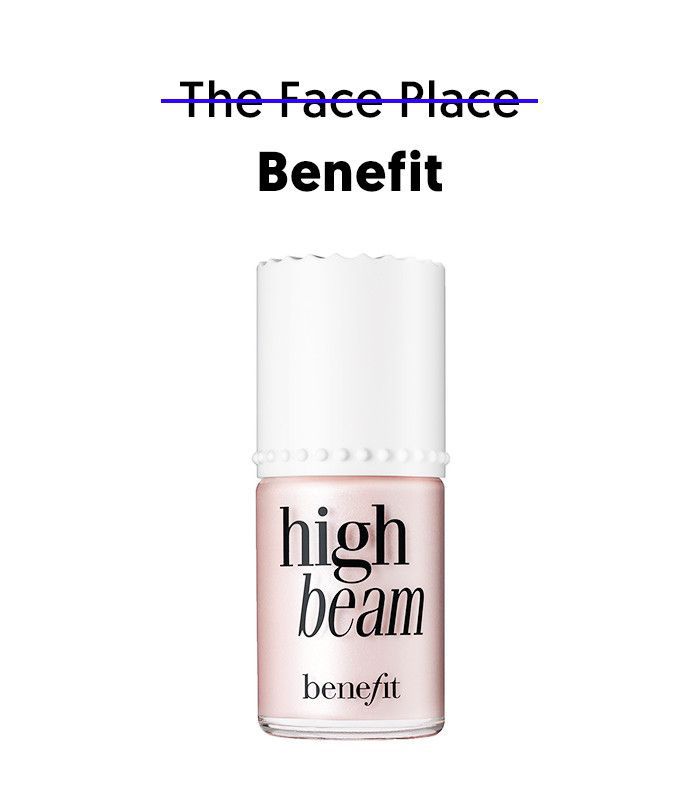 "The name Benefit was created on a whim by my mom and aunt [Benefit co-founders Jane and Jean Ford]. But originally, back in 1976, the brand was called The Face Place. While Jane was traveling in Italy in 1990, they were advised to change the name of their boutiques from The Face Place into a 'brand' name—one that people would identify with at a retail location made up of several brands. But they had two days to come up with a new one. When Jane returned home to San Francisco, she and Jean were racking their brains for a name that was a 'good fit.' During their brainstorms, Jane kept saying 'bene, bene' since she had just returned from Italy. And like that, Jean said, 'That's it! Benefit! A good fit!' — Annie Ford Danielson, guardian of brand DNA at Benefit Cosmetics and daughter/niece of co-founders Jean and Jane Ford 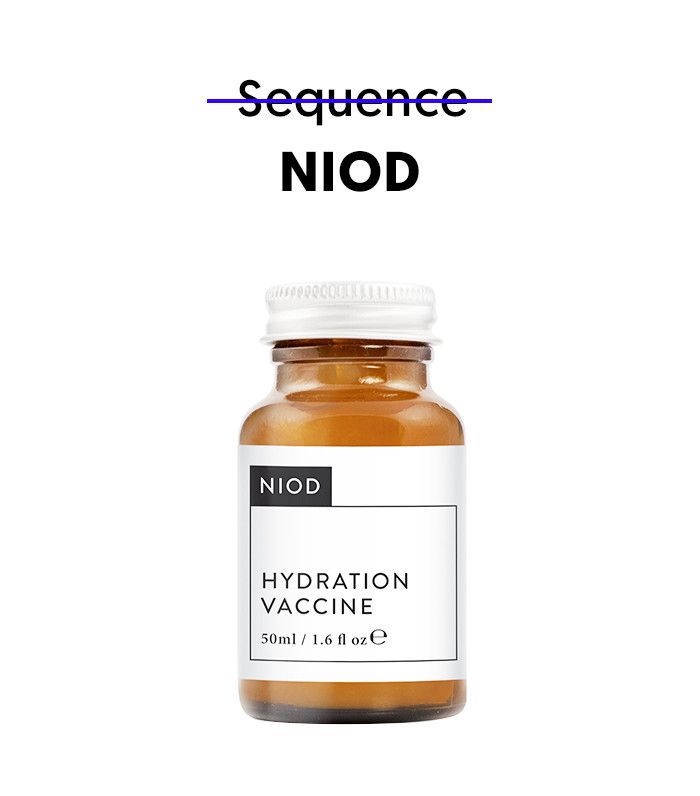 "For NIOD, really hundreds and hundreds of names were thrown around, but they were all scribbles. It was a mess, and I can't recall which options came close to a finish line, but two options were Aryan ('noble' in Sanskrit) and Sequence (referring to the sequence of amino acids in copper peptides).

"NIOD was really difficult to come up with (took years). I didn't have any idea for a name for NIOD. I knew it was a very personal project, so I had to relate to the name emotionally on a very intangible level. And I wanted it to be short, which brings up all sorts of difficulties with respect to domain names (nightmare) and trademarks (limbo). While I was playing with acronyms, non-invasive options in dermatology (or dermal science, to be compliant) found its way on the piece of paper filled with scribbles, and I recalled that I had registered the domain name NIOD.com a long time prior." — Brandon Truaxe, Deciem founder

Youth to the People 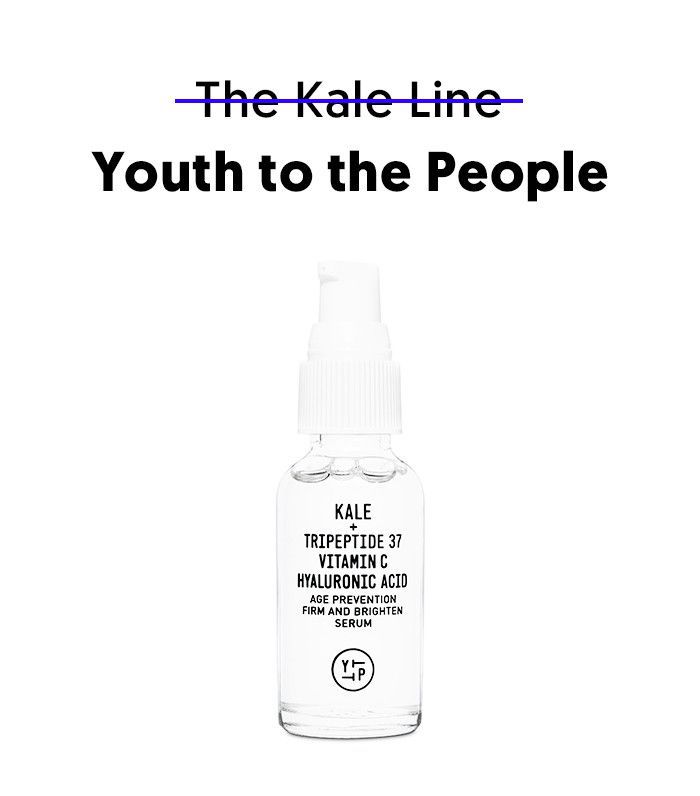 "When we began to think about naming the brand, we wanted to make sure we went with something that represented the modern, creative youth: the innovators, doers, and multitaskers who live a healthy lifestyle. We happened on the name Youth to the People when we were creating copy for our serum: 'Power to the serum, youth to the people.' The sentence really resonated with us, and the brand name was born.

"In the very beginning, we kept calling it The Kale Line because we hadn't come up with an actual name yet, and it was kind of a placeholder. It stuck for a while; at a certain point our family members were all calling it Kale, and we had to keep reminding them that we were Youth to the People! Eventually, they got with the program." — Joe Cloyes and Greg Gonzalez, Youth to the People co-founders