No pain, no gain.

What Is Diatomaceous Earth? Benefits What to Expect
Side Effects The Final Takeaway

It all started when a colleague came back from a vacation in Bali with a parasite. As the resident health editor, I began researching remedies to kill the bug when the course of antibiotics she took was unsuccessful. From my research, I discovered this thing called food-grade diatomaceous earth—aka fossil flour, a powder rich in silica that was purported to have dozens of health benefits. "Diatomaceous earth is also known as a natural treatment for parasites and pathogenic microbes in the digestive tract," says Robin Foroutan, MS, RDN, HHC, an integrative medicine dietitian and spokesperson for the Academy of Nutrition and Dietetics.

Robin Foroutan is a registered dietitian nutritionist specializing in integrative medicine. She practices at New York's The Morrison Center and also serves as a spokesperson for the Academy of Nutrition and Dietetics.

For a little background, silica is one of the most important trace elements in our body; the human body typically holds seven grams of silica, which is much more than any other mineral, even iron or magnesium. For this reason, it's crucial that we maintain enough silica to help our bodies function and absorb minerals properly. As it turns out, it's also been purported to strengthen our hair.

Read on to learn all about my dirt-drinking experiment for longer, stronger hair (fingers crossed).

What Is Diatomaceous Earth?

Diatomaceous earth is made up of tiny fossilized water plants that are ground into a fine white powder. On a microscopic level, these tiny, sharp particles are thought to move through your system, attracting everything from bacteria, fungi, protozoa, viruses, endotoxins, pesticide and drug residues, E. coli, and heavy metals. Apparently, eating it on the reg might not only obliterate parasites but also gently exfoliate my digestive tract—and it might give a health boost to my hair, skin, and nails. "There are two kinds [of diatomaceous earth] and only one is safe for consumption," notes Foroutan. "The label will say 'food grade' in the kind that is safe for consumption. It is high in silica, which may help strengthen bones and may also help with the look of hair, skin, and nails. There is some data to support silica’s role in bone health; the rest is likely anecdotal."

I was curious about what it could do for me, so I got my hands on a bag immediately. I read dozens of reviews online, and each said I could expect my hair to get thicker and stronger in no time. So really, I couldn't get on board fast enough.

First off, let's get the health stuff out of the way. "I’d argue that a benefit to hair, skin, and nails might actually be because the diatomaceous earth may improve gut health by killing parasites and pathogens," says Foroutan. "With a healthier and more balanced microbiome, skin looks healthier and more radiant, and nutrients from your diet are better absorbed." I don't want to get too graphic here, but I will say I found diatomaceous earth's gut-exfoliating effects to be impressive. My digestion is better, and for that reason alone, I can't fathom a time I'll want to stop taking it. As far as the beauty benefits, I wanted longer, stronger hair, and I got it. My hairdresser of four years recently told me, "Your hair is the thickest I have ever seen it." He wasn't lying (I hadn't paid him yet). My nails were suddenly ridge-free, which is something I can't ever remember experiencing.

But if you weren't totally sold, you should know that production of collagen, which is extremely important for healthy skin, requires silica. When we're deficient in silica, our collagen breaks down more quickly, which makes the skin look old and dull. Taking silica may restore and repair the collagen in our body. Silica might also help with skin problems like eczema, rashes, acne, warts, burns, and insect bites. At this point, I'm a convert. 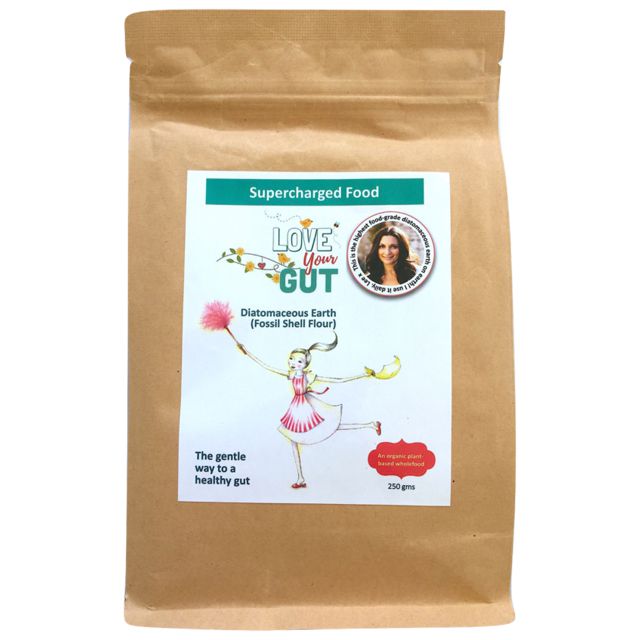 The moment I peeled open my new bag of Supercharged Food's Love Your Gut Powder was the very same moment I realized I'd just committed to eating actual dirt in a quest for better hair. To be fair, the powder looked more like a refined clay (the kind they paint on your face in a beautiful French spa) than brown muck, but it's fair to say I was having reservations. Was I really going to drink this? Could it even dissolve? I have an aversion to gritty textures, so I knew there was a chance it was going to come back up. Still, for the possibility of longer hair, I would give it a try.

The package recommended a full tablespoon, but I started with a teaspoon. I'd read advice online that suggested starting small in case I had a "die-off reaction" (more on that below). Also important, I mixed it into a tall glass of water spiked with apple cider vinegar and took it in the morning on an empty stomach (you have to drink it immediately or else the powder will fall to the bottom). Apparently, taking diatomaceous earth with food can make some people sick, so I played it safe. In my opinion, it tasted like nothing. It made the water slightly milky in a mouthfeel kind of way, but it still tasted like straight-up tap water and ACV. So far, so good.

Opinions are mixed as to whether the phenomenon of die-off symptoms (aka the Jarisch–Herxheimer reaction) is actually real, but I can tell you that after this, I'm near-certain it is. A die-off reaction is thought to be the result of a temporary toxic overload caused by the death of pathogens in your body, and by all accounts, it sucks. Diatomaceous earth is believed to kill parasites by dehydrating them, so it only makes sense that ingesting it on the reg would bring on these symptoms. Since I had never considered the notion that I may have a parasite, I wasn't worried. Silly, because there was significant evidence I did, in fact, have a parasite. Like, for instance, the way in which I was struck down with food poisoning every other month. It happened so often I could have written it into my out-of-office message.

I never thought I would write this on the internet, but my "die-off" symptoms were no joke. The only silver lining was knowing I was getting rid of the hypothetical parasitic jerks taking up residence in my gut. The "die-off" started about three days in, but after another two, it was over. Some say diatomaceous earth also acts as a parasite preventative, so I kept taking it. It was about two weeks in that I began to notice the real benefits.

While I can't be 100 percent sure I did have a parasite prior to taking diatomaceous earth (or magic dirt, as I now refer to it), it doesn't much matter. (And, considering how many people globally are estimated to carry them, I think it was pretty likely.) If I can take a spoonful of the tasteless talc-like powder every morning to make myself an inhospitable host, I will. Plus, as I've said, I did it mainly for the beauty benefits. With such a high silica content, plus magnesium, zinc, and calcium, my hair, skin, and nails have never looked better. If you're keen to give it a go yourself, make sure you buy a food-grade powder. Lesser grades are used to clean pools and kill bed bugs and aren't approved for internal use. The Supercharged Food brand is extremely pure and has glowing reviews on Nourished Life to recommend it.

I Finally Found a Routine That Works For My Thin, Fragile Hair