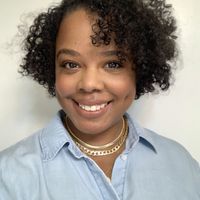 If you had natural hair and were on YouTube in the mid-2000s, then you know that Bantu knots were that girl. Honestly, they were (and still are, let’s be real) a wonderful protective hairstyle as well as a two-in-one deal. You can wear your Bantu knots for a while and then you can take them out, and voilà—you have effortless, heat-free curls. It’s truly an iconic hairstyle.

"Bantu knots are considered a protective style because the ends of the hair are tucked away, keeping them protected and unexposed from outside elements," says Erinn Courtney, StyleSeat Hairstylist.

The style might have been popularized through the natural hair community, but Bantu knots have been around for more than 100 years. They are believed to have originated with the Zulu tribes of Southern and West Africa, and they have remained a popular hairstyle for Black people throughout the world ever since. And the best part? They’re super easy to do.

"Another extremely popular way to wear Bantu knots is to untwist them after a couple of days for gorgeous bouncy, wand-like curls," says celebrity stylist Whitney Eaddy, the founder of Juices & Botanics.

These classic Bantu knots are the perfect low-key style to add to your natural hair repertoire. For a super smooth look, add a few drops of pure marula oil to your hair and smooth it through your strands before you twist each bun.

If your hair is long, you can opt for this braided look. Instead of twisting your hair into buns, first, braid your hair, and then twist. This will result in a tall, sculptural look. For the finishing touch, slick down your baby hair using Pattern Beauty's Edge Tool ($12) and Edge Control ($12).

Even though Bantu knots are practically art in and of themselves, there’s always room to add to the fun. For this look, all you need are thin pieces of gold or silver wire. Take the wire and gently wrap it around your knots, then tuck the ends into the top of each knot.

"Because these knots are larger, it's important to not get them wet because they frizz easily," Courtney advises. "Using products like edge controls that aren't completely water-based will help to keep the frizz down."

Neat, geometric parts take this simple style up a few notches. To get your parts really neat, use the tip of a rattail comb.

Balayage blonde highlights get the Bantu treatment in this look. You can use some temporary hair dye (like Curlsmith’s Hair Makeup in Copper, $20), or if you want to go permanent, consult with a stylist who can help you choose a shade that’ll keep your curls healthy and intact.

Instead of normal parts, take it up a notch by adding in some zigzags. You can even cornrow small braids into your parts as well, and then wrap the loose ends around your knots.

Big Bantu knots and oversized rhinestone bobby pins are *chef’s kiss.* If you want to make your own statement look, check out the Drippin’ Rhinestone Bobby Pin ($29) from Kitsch.

This showstopping look is achieved by neatly braiding the ends of your knots into the scalp.

To recreate this look by Viola Bruce of Bruce Braids, make seven triangle parts in the back of your head. (You might need to use a mirror or an extra helping hand.) Then, use a brush for baby hair and some edge control to slick down your hair for a neat look.

You don’t always have to have a ton of knots to create a look—just take a tip from Gabrielle Union. Blow out your hair, make six parts, twist your hair, and then form those twists into big knots. Easy and breezy. "Coconut Oil Spray from Palmers ($11) would be great to keep the parts and scalp moisturized for the duration of this style," Courtney says.

"This style can be cared for by wearing a silk bonnet to sleep at night," Courtney advises. "Something bigger that won't be uncomfortable because it has enough room for these larger knots."

If your hair is on the shorter side, opt for these tiny knots instead. To keep your mini knots in place, use Proclaim's Black Super Stretch Braiding Rubber Bands ($12) around your twists.

"Because these knots are so small, she could easily wear a durag to sleep and keep this style fresh," Courtney says. "Olive oil edge control would be great to help her baby hair lay for the duration of this style."

South African actress Natasha Thahane gives Bantu knots a vacation-ready vibe by cornrowing the sides. Just tuck the ends of the braids into the Bantu knots in the back, and you’re ready to hit the pool in style.

Swooped and laid edges paired with super sleek Bantu knots will always be a vibe. "This style could use a daily refresher of edge control," Courtney says. "Also maybe some Got2b gel ($4) to keep the edges laid.

Bantu knots and locs are a match made in heaven. You can serve a little '90s inspo and frame your face by leaving out two locs from the front two Bantu knots.

Create symmetry with your Bantu knots by placing one big bun in the middle, offset by minis alongside your temples.

"Keeping Bantu knots dry is important because it will help keep the style fresh and not weighed down," Courtney says.

Feed-in braids + Bantu knots = a match made in heaven. For a real showstopping look, add in some gold beads and of course, lay down the baby hair.

Actress Kiki Layne channeled her inner goddess by wearing a big Bantu knot crown to the Spirit Awards. Instead of straight parts, she placed her knots on the diagonal to create a really dynamic look.

These green box braid knots have us clapping our hands with glee. Color always adds to any look, and if you want a low-commitment way to get vibrant locs, add some synthetic crochet twist hair to your braids. Don’t forget to add in a little braid jewelry, too.

In the words of stylist Law Roach on HBO’s Legendary, these triangle parts are doing what needs to be done (IYKYK). Triangle parts add visual dynamism to the look without much effort. It’s like making art with your hair, and honestly, we live for that.

Beauty influencer Jackie Aina’s freshly braided Bantu knots are super easy to recreate. Instead of twisting your hair, braid down the entire length, wrap, and secure with a bobby pin. At night, you can sleep with a silk scarf to prevent frizz.

Copper Knots With a Curly Fro

Channel some Scary Spice energy into your life by doing a few Bantu knots at the front and letting your natural hair go free in the back. For really defined curls, apply a hair gel like the Adwoa Baomint Curl Defining Gel ($32) to freshly washed (and most importantly, soaking wet) hair. Scrunch, diffuse, or even air dry for perfect, frizz-free curls without the crunch.

Who says a princess needs a metal crown? These Bantu knots, formed into a gorgeous circle framing the head, are 100 percent fit for royalty. To keep your knots looking fresh, opt to sleep on a silk pillowcase.

This look is giving it all. Nineties-style braids and beads frame the face, Bantu knots form a crown, and the thick, twisted ponytail is giving us regal. This is a great look to try on blow-dried hair. If you want a super sleek blow-dry, you can use the Amika Blow Dryer Brush ($100), paired with Briogeo's Farewell Frizz Blow Dry Perfection and Heat Protectant Créme ($24).