Exclusive: Getting Ready With Awkwafina for the 2019 Oscars

Awkwafina, more formally known as Nora Lum, was never too keen on getting glam. In an interview with Today, the Crazy Rich Asians actress dubbed herself a tomboy who didn't wear makeup until she turned 20. When she did turn to products, the former CVS employee remained brand-loyal, turning mostly to drugstore products, but her launch into the lime light has understandably introduced her to more prestige items and a top-notch glam squad who, undeniably have been knocking her red-carpet looks out of the park (like her scarlet SAG moment or angelic sheer white dress with glitzy gold lids at the Ocean's 8 premiere).

Last night Awkwafina—and her glam team—hit another home run. She appeared on the red carpet looking fresh-faced and optimistic. That was just as we expected. After all, this is someone who’s attending their first Academy Awards ceremony to represent the blockbuster and boundary-breaking film in which they played a breakout role. What we didn’t expect was her romantic beauty look that involved sheer lilac makeup and soft waves that cascaded down her shoulders. Luckily we have all the behind-the-scenes secrets from her makeup artist Mai Quynh and her hairstylist Anh Co Tran.

Celebrity hairstylist and co-founder of Ramirez Tran salon, Anh Co Tran, preps Awkwafina's hair for those long, loose waves we mentioned earlier. His specialty is created "lived-in" texture, which is exactly what he did with Awkwafina's raven locks. "It's a modern tweak on classic waves, Tran said. "I wanted something youthful and chic to cohesively vibe with the pussy bow power suit and the soft makeup," he added. To achieve the look, Tran applied a medium-hold mousse on dry hair and then used Ghd's Air Professional Performance Hairdryer ($199), lifting at the roots for volume. "Once the hair has been fully prepped," Tran says, "I used Ghd's Platinum+ Styler ($249) to create what I like to call the #nuwave. It’s a loose, sexy, lived-in texture."

All Quynh had to say about this cute image of the crew was, "us doing our magic on the hilarious Awkwafina." As you can see, Tran is curling the starlet's hair while Quynh is blending her foundation with a makeup sponge.

Quynh made sure Awkwafina had glowing and hydrated skin by using Kiehl’s Calendula & Aloe Soothing Hydration Masque ($45). After leaving it on for about 5 minutes, she rinsed it off and added Kiehl's Buttermask for Lips ($26) to hydrate Awkwafina's pout ahead of lipstick. Next it came time for makeup—Giorgio Armani makeup to be exact.

"I look so serious when I do makeup! I swear we were laughing 99% of the time I was there," Quynh says. "I wanted to keep Awkwafina’s makeup fresh and glowing with a slight definition on the eyes. Her pink suit had a flirty spring feeling, so I wanted to incorporate that into the makeup look." As such, she applied Giorgio Armani's cult favorite Luminous Silk Foundation In shade 5.75 ($64) using a damp Beautyblender Sponge ($20) before reaching for Giorgio Armani's Power Fabric Concealer in shade 3.5 ($34) to conceal her under-eye area. 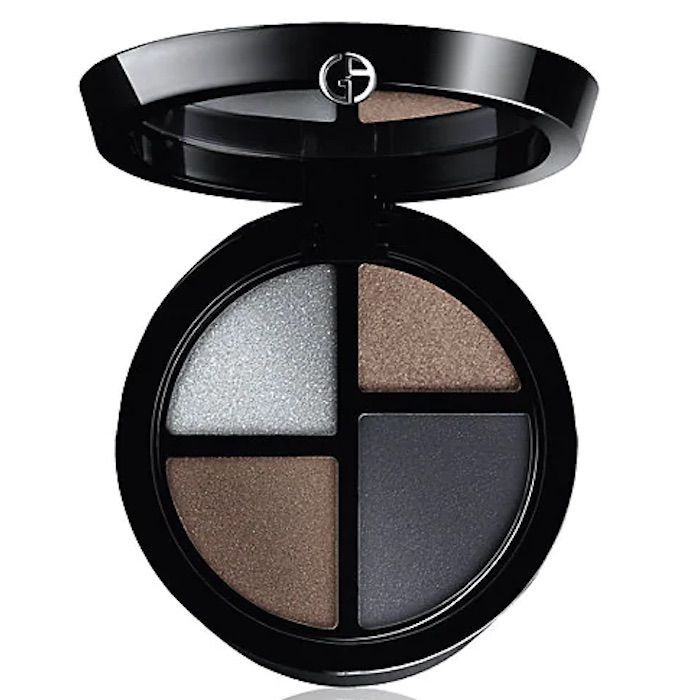 Giorgio Armani products were also used to create Awkwafina's springtime lilac eye makeup. Mai applied Giorgio Armani Eye Tint Eyeshadow in 12 ($39) all over her lid. Next, she smudged the brand's Eye & Brow Maestro in 1 ($35) along her upper lash line, layering the Eyes to Kill Eye Quattro Eyeshadow in 4 ($58) over it. She finished the eyes with two coats of Giorgio Armani Eccentrico Mascara ($32).

Finally it was time for one last photo opp before Awkwafina walked the red carpet at the Dolby Theater in Los Angeles. "The whole team getting a full length pic before she ran off for the red carpet," Quynh captioned this photo. The final look is fun, fresh, and unique, just like Awkwafina herself.