Awkwafina's Makeup Artist on the Secret to Her "Celestial Glow"

Considering the frequency with which Awkwafina stuns, it takes a pretty special makeup look top her previous ones. Since she first came on our collective radars with her music years ago then gracefully (yet unsurprisingly to anyone familiar with her talent) made the leap into film and television, Nora from Queens vacillates between downtown cool girl and high-gloss glamour frequently and seamlessly. Last night's Golden Globe Awards was heavy on the latter, with celebrity makeup artist Kirin Bhatty pulling inspiration from nature to create a spring-fresh, glowing look fitting for a star. The evening's awards were extra special for Awkwafina as she presented a Best Actor award fresh off her Best Actress victory last year, the first Asian American woman ever to win.

A special night required a very special look, which Bhatty delivered thanks to an arsenal of luminous Chanel Beauty products. Byrdie spoke with the delightful Bhatty for an exclusive look at her inspiration behind Awkwafina's makeup, her top tricks and techniques, and how you can score the starlight-bright look for yourself.

Bhatty's first step in creating this radiant look was to find a source of inspiration alongside Awkwafina's groovy-glam, pattered Gucci dress. "My inspiration for tonight’s look was spring beauty," she explains, "spring florals and all the beautiful flowers that are about to start blooming." Evidence of warm florals pop up in Awkwafina's makeup color story, ranging from petal-pink cheeks to warm pink-orange lips. But if you first see Awkwafina's glow and think celestial more than terrestrial, you're still on the money. "I wanted to emulate a celestial and cosmic glow as if she was star-kissed or moon-kissed as opposed to being sun-kissed," Bhatty describes. "My goal was to capture that sense of light and luminosity into the subtle beauty look."

To start, Bhatty likes a lot of skin prep on the front end to help keep face makeup lighter and lay better. "I love the CHANEL La Solution 10 de Chanel ($80), the sensitive skin cream," she says. "It's really hydrating and beautiful" but also a foolproof way to ensure there's no unexpected reactions thanks to its sensitive skin-safe formula—in fact, she calls it her favorite pre-makeup moisturizer. And speaking of all-time favorites, Bhatty is self-described obsessed with the CHANEL Hydra Beauty Essence Mist ($90), a multifunctional spray mist she uses for everything from wetting sponges to refreshing the face to preparing for makeup. "If you're going to buy one skincare treat for yourself, get a mist," she advises.

Once it's time to start makeup, Bhatty likes to spot-correct with rosy and green-tinted concealer along with a light coat of the water-based CHANEL Les Beiges Water-Fresh Tint ($65) in Light which she says is an ideal foundation for those who don't like the feeling of foundation. She likes to apply the base with a tried and true Chanel foundation brush, but it's also conducive for applying with fingertips. Light sculpting of Awkwafina's cheekbones with the cult-favorite CHANEL Les Beiges Healthy Glow Bronzing Cream ($50) in Soleil Tan completes the contour, but it marks where the real fun begins. So much of this look is centered around pops of springtime pink, and Bhatty concentrated those colors on Awkwafina's cheeks with a cocktail of three CHANEL blushes: first Pink Explosion, then some Rose Bronze, then used the Fleurs de Printemps Blush and Highlighter Duo ($70). "I know it feels complicated to use three blushes but because Chanel blushes are so layerable, you're kind of able to create your own custom shade without it looking splotchy or heavy." For that show-stopping highlight, CHANEL Rosy Light Drops ($50) give a pearlescent glow that appears to come from the inside out. 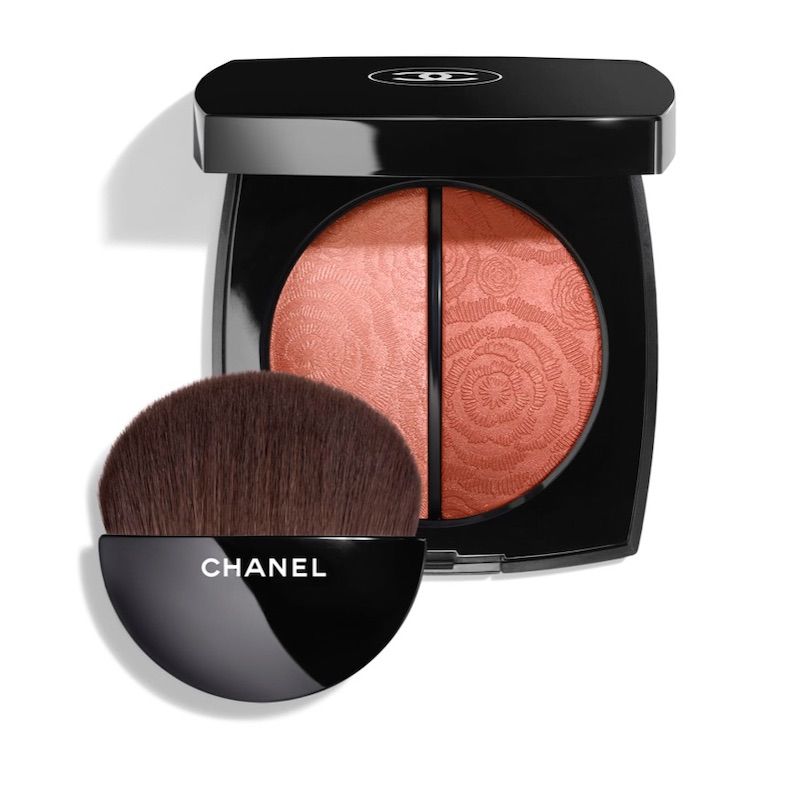 For Awkwafina's shimmery eyes, Bhatty used one of her go-to palettes, the CHANEL Les 4 Ombres ($62) in Tissé Vendôme she says she's constantly running out of because of how often she uses it. "I use three shades in the palette, the cream and pinky shade and a soft golden-gray," she says, explaining that she left the darker shade untouched this time to keep the eyes light and shimmery. Next, she gave the eyes a "hint of a flick" with an inky liquid liner before going over it again with a cream liner and brush: "I like the softness of the line that a brush can create." After a quick lash curl, Bhatty swiped on two coats of CHANEL Le Volume de CHANEL Waterproof Mascara ($32) in Noir. The waterproof is a must for the red carpet—"I don't want any surprises!" she laughs.

For Awkwafina's subtly glossy lips, Bhatty pulls out another special blend of products for a custom lip combination that would hold up throughout the night, even under a face mask. "I wanted to build a look that would be comfortable and long-lasting so I created a hybrid using CHANEL Rouge Allure Ink ($40) in Amoureux and CHANEL Rouge Allure Laque ($40) in Continuous. It's a dream red carpet color for me."

With Bhatty's artistry and sharp eye for custom combinations, Awkwafina emerges not just a star but an entire constellation.

All the Best Beauty Looks From the 78th Golden Globes