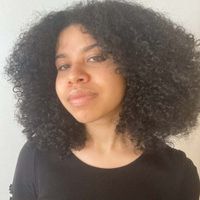 Andrea Bossi
Andrea is a journalist covering beauty, style, and music. She has contributed to Forbes, Insider, and The Harvard Crimson.
Byrdie's Editorial Guidelines

If you’re one of the millions who've binged Emily in Paris, then you know Ashley Park. The newfound success of the series means a more intense schedule for the actor, who's now juggling filming the show, a new movie, and attending the 2022 Met Gala. This has made it more it all the more challenging to balance work while staying in touch with family and friends.

“It’s so hard to be present in daily life,” Park said. “I hardly have time to even call to check in with my parents, my sister, and especially my grandma. I try to reach out at least once a day even with at least a text, just to check in and devote care and connection.”

She said being present and keeping up with loved ones is also helpful for her work. “As an actor, staying present is crucial to be more in character,” Park said.

Park and Starbucks partnered together to launch the Starbucks Coffee Break-away, which includes a short film highlighting the need for connection, featuring pairs of people for a chance of unplugged reconnection.

“Getting to know each one of the pairs, I realized how moments are continually passing us by and there is no time like the present, to truly be ready and present with our loved ones." Park said. "Let’s just say, I got an unexpected feeling in my heart and stomach—and I sent an 'I love you, Mom' text right away."

Below, Park talks about the wonderful versatility of oversized blazers, her first Met Gala, and the one splurge she made after booking Emily in Paris.

The One Outfit That Makes Her Feel the Most Like Herself

“These days, probably a pair of high-waisted ripped jeans or neutral-colored slacks (breezy material like linen), with a pair of really comfortable sneakers or combat boots with height, a tank that acts like a bra (I don't think i've worn a bra on a daily basis in years) and definitely an oversized blazer," she says. "Then top it off with a fanny pack or purse. On a bad hair day, a Goorin Bros. animal trucker hat. And fingers covered with my rings.”

“Recently, I was reminiscing about the couture Valentino dress Mindy wears while singing “Mon Soleil” in the final episode of season 2. There was a lot of thought that went into that look, and I love any outfit that really enhances the storytelling. The sheer material reflected her vulnerability and transparency in that scene, the sparkles were reminiscent of the night sky as the scene was a romantic reckoning," says Park. "And the memories of the fitting for the dress in the gorgeous Valentino atelier in Paris was a special pinch-me moment.”

Her Starbucks Pick Is a Classic

“Oversized blazer or men’s suit jacket." she says. "They're versatile, the best layer for every season, and can elevate an outfit or bring it all together even if you're just wearing a hoodie and sweats. And having plenty of pockets is a plus.”

Lily Collins Gave Her the Best Vintage Treasure in Her Closet

“Lily [Collins] gave me a beautiful pair of orange and pink vintage Chanel earrings for my birthday last year in Paris, which I actually wore for a scene as Mindy," shares Park.

How Travel Has Changed Her Style

“My personal daily style has changed over the years because I've been traveling a lot for work. I've learned to pack the basics so I can mix and match. Quality over quantity. I used to wear heels or heeled boots a lot, but now I prefer sneakers," she explains. "I love an effortless and chic look and feel.  But when it comes to fashion choices for dressing glam and events, my amazing stylist Erin Walsh and I love to have fun with the unexpected and push limits, whether it be with color, structure, and the story that the outfit is telling.”

Her Favorite Fashion Memory is a Recent One

“I think I'd have to say my first Met Gala [in May 2022]," she shares. "There's such a special energy that was indescribable and attending was a dream that I never even thought was possible for me. So much fun going with Prabal Gurung.”

She Only Has One Fashion Regret...Maybe Two

“My only fashion regrets are ones where I didn’t realize how long I would be in an outfit whether on-set or at an event. I really go comfort-first now," Park explains. "Or when I've worn something that I couldn't easily use the bathroom in... eek. Also, every outfit I wore in middle school was questionable.”

“The classic Gucci belt. Someone once told me that whenever you book a big job, I should buy a ‘big girl’ purchase for myself as a reward but also as a marker for that moment and for earning that moment," she says. "The Gucci belt was my ‘big girl’ purchase when I booked Emily in Paris, and it was my first designer purchase. It's the staple belt I pack whenever I travel.”

The Fashion Trend She Used to Hate, But Now Loves

“Platform shoes," she shares. We get it.

The Emily in Paris Character Whose Closet She Wants to Steal

“I want to steal all the suit jackets from Julian’s closet, the dresses from Mindy's closet, and the shoes from Camille's closet,” says Park.

The One Thing That's Always in Her Closet

“Much like everyone else, recently I have been obsessed with Rihanna's pregnant red carpet looks. She's empowering and celebrating the beauty of women. My gosh, she's stunning," she says. "She sat across from me at the Dior show during Paris fashion week and she looks just as radiant in person.”

“It was amazing having to be in Prabal's group with such exquisite women. Mindy Kaling as my dinner seat buddy and Michelle Yeoh holding me up with one hand so I wouldn't fall on the ride over to the Met (standing in stilettos in a huge moving car when you're nervous didn't agree with me), and hitting up after parties with sweet Camilla Cabello was the most fun," she shares. "It was also so memorable how much tireless work goes into that night from my entire team, Prabal's team, and everyone who works the Met event... ‘it takes a village’ truly describes it, and I'm just so grateful to every person who made it possible.”

She Has a Couple of Fashion Crushes At The Moment

“Right now it’s Gigi Hadid. I recently got to work with her and she’s the absolute most grounded and coolest. Yes, she is a fashion icon, but I also think she's iconic because she's an awesome human who works diligently, humbly, and tries to better herself and the world always," she says, adding, "Also J.Lo... I mean that green Versace moment and the recreation of it...chef's kiss.”

Emily in Paris Season 2: Our Favorite Looks and Where to Get Them