R.E.M. is the stage of sleep that’s most similar to being awake. You’re asleep, but only just. A thin veil separating you from the waking world as you fall deeper and deeper into a dreamscape of your own creation.

R.E.M. is also the fourth track on Ariana Grande’s fourth album, the Grammy Award-winning Sweetener. In her own words, the song is about “a relationship that blurs the lines between the dreamworld and reality.” The track is layered with innumerable harmonies, weaving itself between verses and the chorus over and over again, like a reoccurring dream, until we hear Ariana playfully ask her producer “does this end?” as the song comes to a close.

R.E.M. is the thesis of Sweetener. It shows a different side of the singer that she herself has said is more in line with the music she likes to create, in the register she loves to sing in, instead of only the show off, pop vocal moments.

Which is why I’m not surprised that R.E.M. is getting new life in the form of a fragrance.

R.E.M. Eau de Parfum is Ariana’s seventh fragrance, and the third in this new design convention of a circular bottle nestled in a holder that makes up half of the bottle design. For her last fragrance, Thank U, Next, the holder was shaped like a broken heart; for the one before that, Cloud, it was, well, a cloud. R.E.M. sits in a throne of translucent crystals that make it as beautiful to look at as it is to smell.

If Thank U, Next was about heartbreak on earth, and Cloud was about floating in the atmosphere, then R.E.M. is about soaring through the cosmos. Described as “an intergalactic dream of femininity and power," the scent sees space through the mind of a popstar. At first glance, it would seem that there are conflicting ideas, with the dream-like name and the galaxy-inspired concept, but Ariana said of the fragrance “In my dreams … I’m always the version of myself I was in break free tbh.” ("Break Free" is the video where she appears as a space warrior, illustrated on the box below.) Ariana dreams in space, and we can only assume, this is what it smells like out there.

Considering her growing fragrance portfolio, R.E.M. is most similar to the award-winning fragrance, Cloud (that's The Fragrance Foundation's Fragrance of the Year, thank you very much) in that it’s sweet, but there’s something else happening below the surface. It’s a warm, pillowy sweetness, with an undercurrent of something colder, like the pavement after rain in the fall, or the absence of light in deep space. It starts off saccharine in the morning, but halfway throughout the day, it might just hit you almost like a cologne.

The fragrance opens with a muffled, misty version of fig, which brings a deep, nectary sweetness, and salted caramel. My mind always goes straight to the caramel. Did you know that all that caramel is made from is sugar, cream, and butter? I didn’t, but that explains why R.E.M starts off with a certain kind of warm creaminess.

But not for long. Other notes you’ll find at the top are quince and zefir, which is a somewhere in between marshmallow and meringue. Zefir is less of a literal note here, as it doesn’t have much of a scent, but it’s used as a concept to illustrate a soft, airy quality.

The heart of the scent is lavender and pear blossom, which take up a lot of room but never smell floral. Instead, they mute the sweeter notes up top, making them more digestible and giving them longevity throughout wear.

At the base, you’ll find tonka bean, sandalwood, and musk. The musk and lavender really work to add a brisk, heady darkness that pulls up more and more throughout wear, balancing out the syrupy top notes. 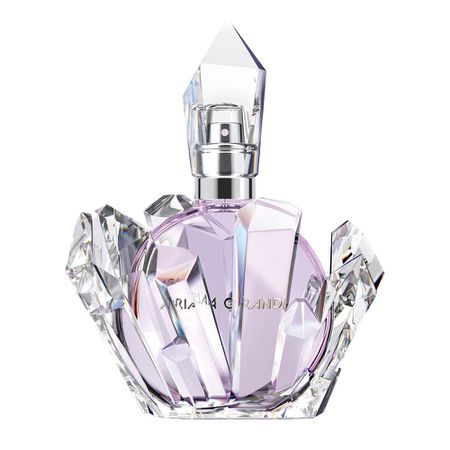 Much like the way that at first glance, there seem to be two conflicting concepts happening in R.E.M.—the scent itself is half sweet, half chilly musks. They somehow come together in a way that keeps me coming back to smell again and again.

It takes you on a ride throughout wear. Like a lot of scents, it evolves throughout the day, but you cannot take this one at face value. First, you get a lot of caramel and fig, but then it takes a turn and suddenly gives you a lot more depth. The sweet notes are still there, but they’ve given way to something else.

R.E.M. is kind of an oddball, in a very fun way. It takes comfort in its own duality and challenges you to do the same. It’s sweet and smart, and proves you don’t have to choose between the two. R.E.M. explores darkness and light in their most abstract forms. Day and night. Lightness and heaviness. Sweetener and thank u, next.

If you’ve been paying attention, the Ariana Grande brand has been releasing some of the most interesting scents of her category, or any category, really. This is just the newest addition in a collection that has started to surprise with every offering. I hope they keep it up, because R.E.M. is such a dream...if you can believe.