I've been stuck in what you might call a haircare rut. With skincare, I can go on for hours about every active ingredient under the sun (my beauty cabinet resembles an apothecary). But, in the haircare department, my efforts are lacking. I don't get my hair trimmed often enough, committing to a hair mask is a rarity on my calendar, and I've probably been washing my hair the exact same way since middle school.

At age 30, what better time to adopt a more sophisticated approach to haircare? I'm proud to say I've already had my hair trimmed twice in 2019, I've begun experimenting with apple cider vinegar scalp scrubs, and I recently switched up my hair wash routine. For the better part of my life, I've stuck to a simple shampoo then conditioner then towel dry regimen. One of my biggest hair complaints (and certainly my partner's) is that my hair ends up everywhere it's not meant to be—meaning anywhere that's not my head, due to shedding or breaking or a combination of the two.

Last year, I started using an Aquis towel to combat this kind of damage, and since adopting the brand's Rapid Dry Waffle Hair Towel, there's been no going back. It speeds up my morning routine by drying my hair in half the time and I've certainly noticed less breakage and shedding since making the switch. So when I heard about Aquis' new Prime System—a four-step haircare approach that goes against the grain of a typical hair wash routine—I was immediately on board.

With this set, the haircare starts before even stepping into the shower. Aquis' products are centered on the fact that wet hair is weak hair, so the first step is to proactively protect your hair before it's exposed to water. The Water Defense PreWash ($29) is a spray-on formula that fortifies your hair (protecting it against damage and moisture loss caused by washing, drying, and styling), and also helps to set hair to its natural pH. Coconut oil saturates each strand to make them hydrophobic, and keratin and cysteine amino acids boost hair health and strength.

Once you spray the PreWash onto dry hair, you're advised to wait at least two minutes before washing. There actually doesn't have to be any wait time standing around in your birthday suit outside of the shower (which I learned after my first go at this) because step two occurs at the very end of your shower sesh.

Washing my hair used to be the very first thing I did when I'd shower, but with the Aquis Prime System, you're instructed to wait until the end of your shower to reduce potential damage (again, wet hair is weak hair). Same as with any shampoo, you're meant to gently massage the Rebalancing Hair Wash ($26) into your hair and then rinse thoroughly. Like the Water Defense PreWash, this product also boasts keratin and cysteine amino acids, as well as plant-derived cleansers (to make your hair hydrophobic and smooth the cuticle layer to reduce tangles and fight frizz).

As soon as you're done washing your hair, you're supposed to end your shower and wrap up your hair in the Rapid-Dry Hair Turban ($30). Like Aquis' other towel products, the turban cuts drying time by 50 percent, and I've learned to prefer it to my Aquis towel because secures my hair right into place (so I can continue my morning routine without any hassle).

The final step of the system might be my favorite. The Restorative Leave-In Conditioner ($26), packed with amino acids and vitamin-rich avocado oil, is designed to be sprayed onto damp hair once you're done towel-drying. The conditioning formula helps to detangle your hair and seal in moisture, and like the other products in the system, rebalance your hair's natural pH and protect it from future damage. It's so weightless that sometimes I'll spray it onto my dry hair to calm humidity frizz and reset my waves. 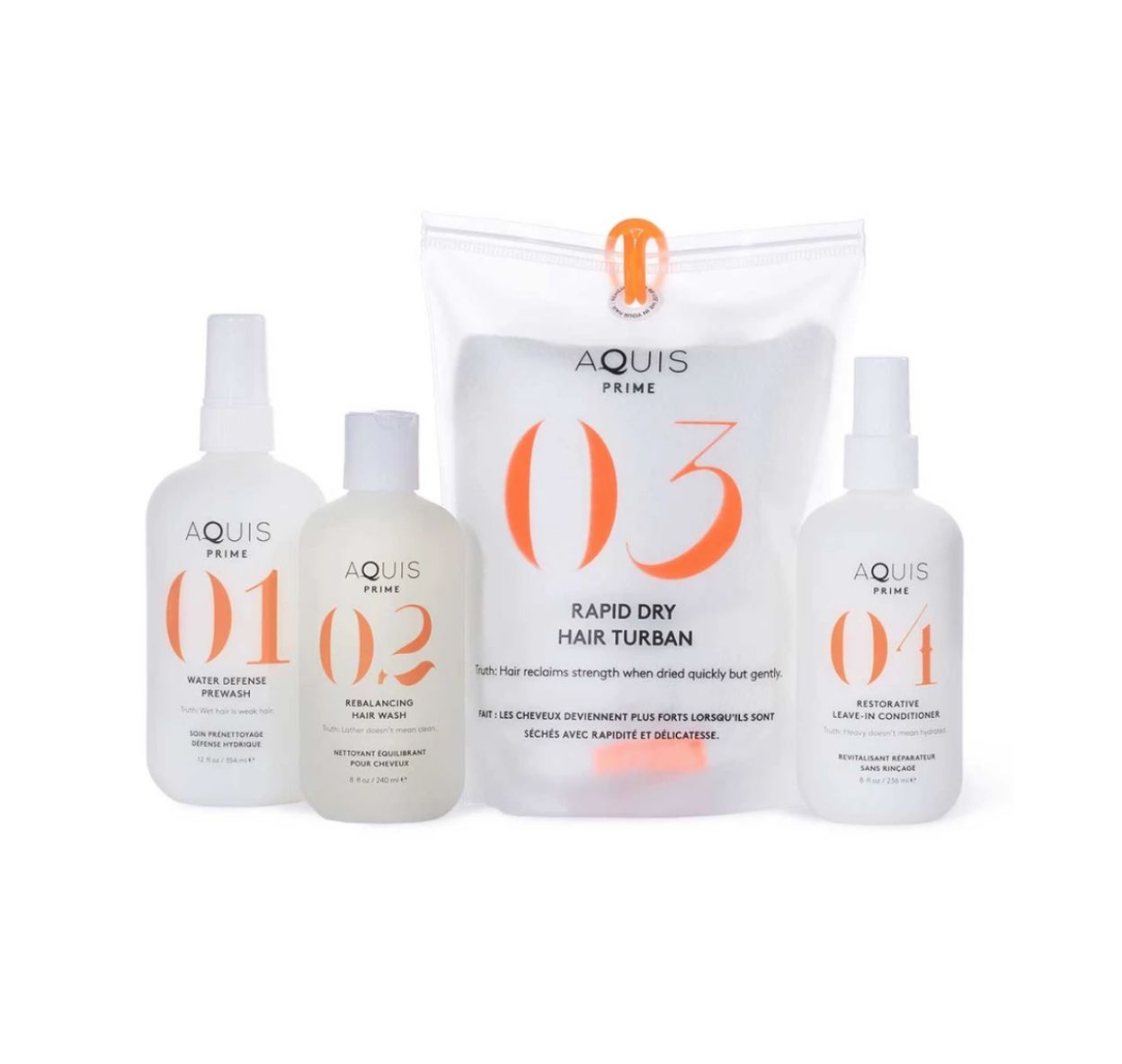 Now, a few months in, my hair has so much more volume and body (without the frizz) and I think the post-shower leave-in conditioner strategy is to thank for it. Rather than feeling like my hair is weighed down by product residue after washing it, my hair feels clean and natural—with just the right amount of product to nourish and moisturize. My hair is naturally wavy, but I usually never know which direction it will go (it depends on the weather). Since using this system, my waves have been more consistent and manageable, and, like I said, a simple reset with a spritz of the Restorative Leave-In Conditioner gets my strands back on track.

Here's how one former Byrdie editor gets away with washing her fine, straight hair only once a week.