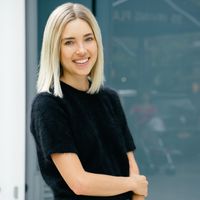 Aemilia Madden
Aemilia Madden is a writer and editor with experience in fashion, beauty, lifestyle, and wellness. Her work has appeared in Who What Wear, Popsugar and the Zoe Report.
Byrdie's Editorial Guidelines

Techcessories—the bridge between stylized outfit add-ons and everyday technology—is hardly a new term. According to popular slang website Urban Dictionary, the word dates back to at least 2010. And recently, there's a new high-tech status symbol celebrities and influencers are incorporating into their looks, Apple's AirPods Max ($549) headphones. Like all of the items produced by Apple over the past 20 years—from the humble iPod nano to today's iPhone 13 Pro Max—the headphones turn an everyday necessity into a must-have. Though they debuted in late 2020, this year has proven to be the year of the supersized headphone (thanks partly to social media and a stream of famous trendsetters co-signing them as the next big thing).

Celebrities like Kylie Jenner, Bella Hadid, and Dua Lipa have been spotted in the headphones, using them to add a laid-back, didn't-try-to-hard touch to street-style outfits. While the $500 headphones don't have the same touch of Y2K nostalgia as wired headphones (popularized by the Instagram @wireditgirls), topping off a casual look with a colorful pair of chunky headphones shows an attention to detail that can lead to major outfit envy.

Still, celebrities aren't the only ones embracing over-the-ear designs. On TikTok, users have made thousands of videos reviewing the headphones and offering their takes on styling the different colorways (currently, they come in space grey, silver, forest green, sky blue, and pink).

Clara Perlmutter, who goes by the TikTok handle @Tinyjewishgirl and currently has over 815K followers, styled hers with pieces from emerging designers like Tyler McGillivary and Zoe Grinfield. Others are going for a more casual route, styling gym staples or simple jeans and tee combination with a sleek pair of headphones as a finishing touch.

"The larger 'techcessory' trend gives a sense of nostalgia," says Heart Defensor Telagaarta, a TikTok creator with over 3.6 million followers. "[It takes us back to a time] when everyone walked around with baggy jeans, graphic tees, and headphones connected to their walkmans."

As luxury designers like Miu Miu, Bluemarine, and Balenciaga have ushered in the return of low-rise jeans, mini skirts, and slouchy bags, technology has also drawn on the nostalgia of the early aughts, with the return of a new Motorola Razr in 2019 and chunky smartwatches. For those who grew up in the era of earbuds, the chance to adopt the over-the-ear look is something novel.

"I purchased them when they weren't 'cool' on TikTok," says Telegarta, whose unboxing video has received millions of views. Instead, it was the technical aspects that first attracted her. "The noise cancellation feature is superior," she says. "It tunes out the world and allows you to be in your own bubble."

As reviewers have examined the practical aspects of the headphones, features like spatial audio, automatic BlueTooth connection, and noise cancelation have been highlighted as particularly exciting. "This is my first time trying them on. I can't hear myself, but they look great," Perlmutter says in her styling video.

However, for all the impressive engineering that sets these headphones apart, it's also worth noting the price tag limits those who can partake in the trend. In the same way a designer handbag can be used to denote status, so can the simple addition of an expensive pair of headphones. When used as an add-on to a laid-back ensemble, such headphones can convey a nonchalant type of luxury. If the intention is to keep the headphones for several years, then investing in them may be worth it (think about a cost-per-wear calculation). Still, if the intention is to enter into the trend conversation, it may be better to opt for more affordable alternatives instead.

Regardless, no matter how stylish the headphones might be, seeing them in the wild would be a rare occurrence if the product weren't practical to use. While the over-the-ear headphones may not be snug enough for vigorous exercise, many creators have made them an essential part of their daily routines (whether it's to drown out the sounds of a loud subway commute or as a cord-free style to use at the gym). Techcessories as a category are intended to make life easier for the user—to close the gap between form and function. For those who have embraced the Airpod Max—whether for style or sound—being tethered to earbuds simply won't cut it anymore.

Then and Now: An 'Old Millennial' on the Y2K Fashion Revival