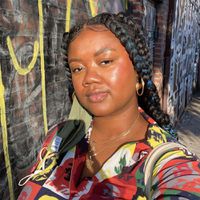 As I reminisce on some of my favorite queens of Black beauty in the early 2000s, I can't help but take a closer look at the photos themselves—there's a white or grayish cast in most of the iconic photos. The reason? A proper array of face makeup options for women of color was practically nonexistent. As such, this decade has been defined in a lot of ways by the changing relationship Black women have with their makeup. Drugstore brands (including Fashion Fair, Black Opal, and Black Radiance) as well as more prestige options (like Pat McGrath and Fenty) are finally getting the representation and shelf-space they deserve. Others have rebranded and developed wider shade ranges to offer more inclusive options. That said, what happens when there are 40+ shades in a collection, but none of yours are represented?

Being the change you want to see in any industry can be tough—especially in beauty. Harlem-native Diarrha N'Diaye wasn’t offered many options. So, five years later, she created her own line of products to change that.

Inspired by the cultural exchanges she saw between native New Yorkers and Sengalese immigrants as a young girl, N'Diaye found beauty at home through her mother’s hair salon, Aminata Hair Braiding. But as she made her way into the industry, she noticed an unfamiliar disconnect. “For a very long time, I didn’t know beauty outside of this bubble,” she says. “The idea of my mother’s shop was to transform someone into their most beautiful self, and that’s what I saw. Girls would travel to our salon with their cut-outs and Hype Hair magazine and that was our pinnacle of beauty,” N'Diaye continues. “It wasn’t until I hit the ‘real world’ where I realized that wasn’t represented."

Despite contributing to 86 percent of sales in the beauty industry—which adds up to a whopping $54 million—Black consumers’ needs are often ignored. Then, N'Diaye realized she had to get up close to these brands to enact real change. She worked as a social media strategist at L’Oréal and on the product development team at Glossier. Even then, her work further proved how tough the industry was on a Black woman—N'Diaye was constantly the only woman of color in the room. “We were afterthoughts, even in terms of formulation,” she shares. “Many vendors catered to the same people and brands. So out of habit, distributors are creating products in a certain shade range (catered to light skin), and then throwing in a darker shade to accommodate a ‘woman of color.’” N'Diaye adds, “The formulations didn’t have us in mind from the beginning. I always felt like I was being squeezed into a space. There wasn’t much thought about how we influence culture or how we influence spend.”

She continues, “Many times, I was the only one on a team of 50, or even 100, having to explain why the brand’s key messaging or particular imagery was not appropriate for us. I am Black, yes. But, I don’t represent every single experience. I felt very tokenized in some instances, but also felt the need to also be an advocate for all of us. It was a tough space.”

While some would find her experience disheartening, N'Diaye used it the inspiration she needed to create her own brand, Ami Cole—an idea she’s been working on since 2014. Named after her mother, the brand is set to cater to our skin first. After surveying her audience, N'Diaye quickly realized, no matter your age, “people want their skin, but better.” Her initial collection is set to provide a skin-enhancing tint, an illuminator, and a lip treatment. “I thought it was important to offer these products because there aren’t a lot of options. I loved Laura Mercier’s Tinted Moisturizer, but they didn’t offer my shade until two months ago. Brands weren’t giving me the tint I wanted. Each of the products are going to have a skincare first approach.”

N'Diaye has tapped into her audience in ways many companies do not—by championing transparent every single step of the way. She’s surveyed women about the way they prefer to wear makeup, sent samples back for correction based on community feedback, and remained really engaged on Instagram. “In the age of social media, anybody can do anything—which is great. But, deciding not to show exactly how you’ve gotten from one point to another, you do yourself a disservice. It’s amazing to demonstrate how this beautiful thing came to life.” N'Diaye wants to use her platform as a way to educate those who are interested in beauty but may not have the resources to explore it. “I think there’s an educational point to it. There is a ‘showing the work’ component to it. There is a community work point to it. Many brands ‘for us’ don’t talk about the process, but I’m bringing the community along with me. It’s never just about me. It’s really about the women who have been on this journey along with me. Beauty is a language."

Ami Cole is set to officially launch Summer 2020. Follow along with Diarrha Ndiaye, her team, and the progression of Ami Cole here.

The 9 Best Cruelty-Free, Vegan Foundations for Women of Color