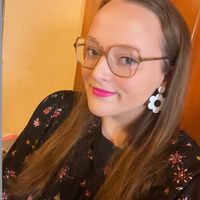 Casey Clark
Casey has been writing professionally for four years. She has contributed to Allure, Cosmopolitan, SELF, Women’s Health, and more.
Byrdie's Editorial Guidelines

Ali Stroker has a robust acting portfolio from Broadway shows to Netflix's upcoming mystery-thriller series ECHOES. Still, when she isn't working on stage, she's a devout advocate for people with disabilities. Stroker's the first actor to perform on Broadway who uses a wheelchair for mobility.

We caught up with Stroker to talk about her upcoming Netflix project, becoming a new mom for the first time, and all of the beauty tips and tricks she's gathered over the years. Ahead, read more how Stroker is changing the narrative around people with disabilities and what's on the horizon for her.

Hi Ali! Can you tell us about your role in Netflix's newest mystery thriller, ECHOES, premiering on August 19th?

ECHOES is a mystery thriller about twin sisters who swap lives, and I play the sister of the twins.

What is your typical makeup routine? How does it differ from the makeup you wear on set?

I don't usually wear a ton of makeup outside of work because when you're an actress, wearing makeup is part of your job. However, I love to wear bronzer, and Hourglass makes one of my favorites. I also love mascara, and I am usually wearing a Benefit formula. I've been really into Rare Beauty this summer, and I love their creamy lipstick, and Fenty lipgloss is also one of my favorites.

There is an incredible team of makeup artists on set for ECHOES and we created an everyday look for my character Claudia based on my daily routine. Still, for parties or events, they would go heavier on my eyes or switch my lip color. The difference with on-camera makeup is you wear a lot more, and the lights pick up different colors and shadows, whereas in real life, when you're wearing on-camera makeup, it looks like you're wearing a heavy amount of foundation and eye makeup.

Aside from television, you've had an extensive career on Broadway and made history as the first actress in a wheelchair to perform on Broadway. What does that mean to you?

I grew up doing theater, and my dream as a little girl was to be on Broadway. Getting to do two Broadway shows and winning a Tony Award has been a dream. I love doing live theatre so much—there's nothing like it in the world, and it makes me feel so alive. Every night is different, and it's thrilling.

Making history as the first person in a wheelchair on Broadway was exciting and lit a fire inside me to make change. There's still a lot of work to be done for the disabled community, and I'm excited to be a part of that.

Harping on that point, what kind of advocacy work are you involved in?

Talking about stories, you wrote a children's book, Ali and the Sea Stars. What was the inspiration behind that?

The inspiration was my real life. I did musical theatre on the Jersey shore when I was a little girl. Ali is the main character [in the book], and she's in a wheelchair, but the story is about her putting on a show. I think progress looks like living in a world where people are disabled, and we don’t assume that their disability rules their life. Representation should be reflective of the real world.

What do you think the future of the entertainment industry looks like for people with disabilities moving forward?

I hope there are more of us part of storylines in shows, live theater, and in media. Across the board, one in four Americans identify as having disabilities, yet we are not even close to being represented in that way.

For a long time, history has shown us that people with disabilities are not visible in daily life. What is exciting is that social media has changed the world so fast. You don't have to be cast in a campaign to be able to be seen, and everyone can have a platform. We have so many more opportunities to create representation. I don't think we've taken full advantage of all of them, but I think it's possible, and change will happen.

What kinds of stories have you received from fans on social media about how you've inspired and changed their lives?

I set out to achieve my dream and didn't know what the ripple effect would be. Still, when one person does it, a whole generation of people start to think it's no longer impossible. I've heard from many people who've said I wasn't going to do theater or audition for a show. I will never take credit for someone else's decision to chase their dreams—it's all them, but representation can change someone's mind. I can be a reminder for people of the strength and courage already inside of them.

What makes you feel most confident? How do you prepare to take on the world as an actress?

It's changed a lot over the years. Sometimes I look for things that make me feel good, and the people I surround myself with play a huge part. When I speak to my family and my husband, they are reflections of me and make me feel like my most authentic self. I love the environment I live in and am proud of all the steps I took to get here. When we're young, we want to snap our fingers and be at the destination, but I'm so glad it took as long as it did because it's so much sweeter when you arrive.

What's next for you?

I'm pregnant right now, and I'm excited about it. It's a new chapter in my life. As an actor, performer, and someone in the entertainment industry, taking on this new role as a mom and caregiver is exciting.

I'm looking forward to being present and in the moment and learning so many new things. I can’t wait to share those discoveries with the world and other disabled parents. I don’t think there is enough representation for disabled parents, and I want to help change that. Ultimately, I'm thrilled about this new chapter and what a gift it is to create life.

Phoebe Robinson On Hobbies, Breakups, and Living Her Best Life No Matter What