Everything You've Ever Wanted to Know About Alexa Chung's Hair

When I aired the news to the office that I was interviewing Alexa Chung about her hair, a frisson of excitement traveled around the room. A lot of people are obsessed with her mane and a few of them sit in my office. So, armed with my questions and theirs, I hopped on the Eurostar to interview the presenter (and arguably London’s most stylish expat) about her hair secrets.

I met with Chung in a hotel suite in Paris to talk about her new gig as L’Oréal Professionnel’s international spokesperson for Parisian Nudes, the brand’s chic new in-salon hair color collection that was inspired by the 55-percent increase in searches on Google for the term Parisian hair. (Considering her effortlessly cool Jane Birkin vibe, they picked the right gal.) The collection offers a range of 75 beige and brown hair colors expertly applied to create a multi-tonal, multidimensional effect just like Chung’s.

Tell us about Parisian Nudes.

Well, I like Parisians and I love being nude! [Laughs]. You know, L’Oréal Professionnel approached me to be the ambassador for this particular product, and I think it was because there’s some kind of a synergy between my hair routine and love of things being ultra natural and the service they’re offering. Which is something that embellishes your natural beauty but doesn’t move it too far away from what’s natural.

Your look is quite French…

Do you think? That’s what I’ve been going for quite a while, so I’m thrilled it’s been recognized by a French brand.

Why do you think people are so enamored with French-girl style?

Because it’s exotic still. Parisian women, in general, are very mystifying, aren’t they? They’re kind of an elusive character, and so we’re probably resting on old tropes to kind of come up with this idealized French woman. Earlier I was being interviewed by an Italian woman who said, “Why do I think all British women are blonde?” So I’m sure we’re getting it a bit wrong about our perception of French beauty, but, you know, they’ve always been renowned for having a really great attitude to beauty and an amazing skincare routine. If you ever see older ladies in the street, they always look incredibly chic, and I think it’s because French style is about celebrating oneself. You never see a French woman in an ill-fitting pair of jeans in the same way you might in London. People [in the UK] are like, "I’ll try that trend," whereas, in France, they’re like [puts on a French accent], "But it doesn’t suit me because of my measurements." They know what they’re doing.

You’re a hair icon to so many.

Me and Rachel Green.

What’s your favorite haircut you’ve had?

We talk about a future hairstyle that’s yet to emerge often and it never ends up happening, but George [Northwood] and I have plans to do the Justine Frischmann [lead singer of Elastica] long at the front, short at the back, but not like Kate Plus 8. I really like a very short bob. My issue with that is it does change what you have to do with your clothes. It’s not like I feel like a man, but I do just feel too masculine, so then I have to wear ultra-feminine things, and I don’t have enough of those in the wardrobe to keep up with it. I think a bit more length is helpful to feel a bit softer. I’ve already got a low voice. I mean, it’s just too much.

How do you get that effortless look at home?

I wash it every day. I then wait for it to half-dry and then twist it. Either pin it into small buns and hope for the best or twist it a lot. I also have to massage my scalp a lot to give it lift. I use [texture] spray and dry shampoo in the roots. I don’t use a lot of product. I’m lucky, but not really. It’s very fine, so it dries really quickly, but I’m still envious of my friend Gillian who has cascading blonde hair. She doesn’t wash her hair every day, and I’m like, “That’s mad.” But she’s like, “It’s so thick that if I wash mine, it goes massive.” It’s different vibes for everyone.

You have a great relationship with your hairdresser George, but how often do you have your hair cut?

In terms of going into the salon, not that many times a year, but he often trims it if we’re working together. And also, it can be on a whim. Last year before the Met ball, I decided to suddenly have an actual fringe again and take it up a few inches. You suddenly feel really fresh. But also, my hair grows incredibly quickly—my hair and nails are like Wolverine—it’s weird. It’s actually weird.

Do you have any favorite hair accessories? 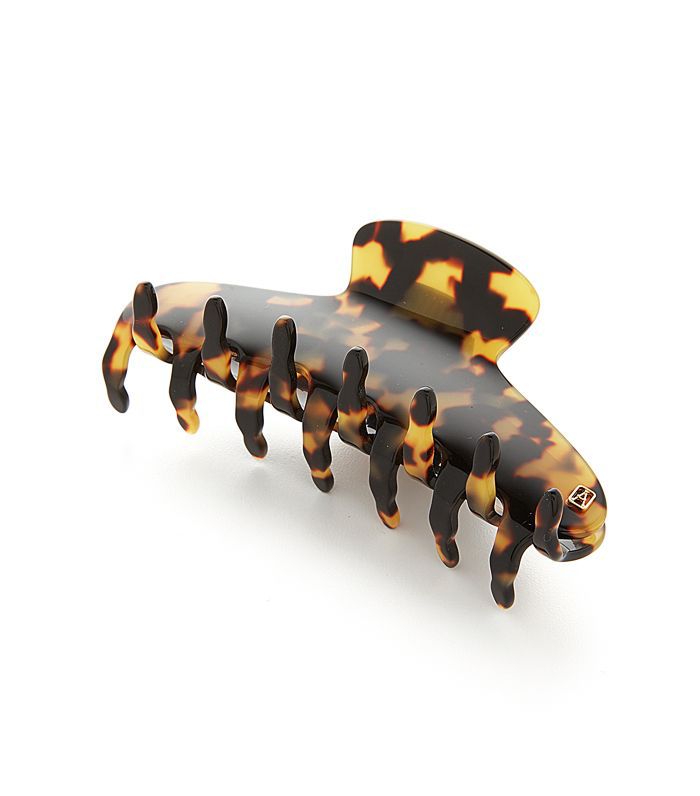 What hair trends do you love right now?

I really like the mullet situation. I think that looks great. Not necessarily on me, but I have a couple of mates with it. It was funny—remember when Peaky Blinders came out and all boys got that haircut? That was amazing.

Find out more about the Parisian Nudes colour collection.