Aesop: A Review of the Skincare Brand and Its Best Products

A few years back it might’ve been suitable to refer to Aesop as a ‘cult favorite,’ but judging by its global fame and legions of loyal fans, ‘superstar skin and body care brand’ is more like it. Yet, despite its fame and reach, Aesop is still as down-to-earth as many of its key ingredients, as approachable as its instantly-recognizable apothecary style bottles and, with more than 230 stores around the world and a bustling online business, as accessible as ever.

Despite all this, that cult-like feeling sure hasn’t dissipated. Ask anybody who uses it—it’s simply a brand you love to love. Fans of Aesop are ardent in their devotion with an allegiance that (at least for me) comes down to how the products make you feel. Not just what’s inside, but that gut feeling you get when you see an Aesop product sitting on a counter. This feeling, Suzanne Santos, Chief Customer Officer for Aesop and a driving force behind their global mystique explained, is what drives the brand’s core philosophy: to deliver products of the finest quality, speak honestly and intelligently to our customers, and never prey on their vulnerabilities or insecurities. And in an age seething with brands whose cryptic product names and difficult to pronounce ingredients can feel a bit intimidating, Aesop indeed takes an outwardly pleasant, amiable approach to naming and presenting its products.

Whether it’s the famed Parsley Seed Anti-Oxidant Eye Cream (an outstanding eye cream) or its Resurrection Hand Balm (a gloriously-scented hand cream that could cure a hangover in a few sniffs)—you know exactly what you’re getting and you’re not afraid to ask for more.

Founded By: Dennis Paphitis in 1987

Based In: Melbourne and London

Fun Fact: The idea for Aesop products occurred to founder Dennis Paphitis while mixing essential oils with commercial coloring and perming products in an attempt to mask the overpowering smell of ammonia. Nowadays, essential oils are a key ingredient of the Aesop range.

Aesop was founded as a hair and body care range in 1987 by barber Dennis Paphitis in Melbourne, Australia, the result of some back room mixology involving essential oils and a mission to change things up. “Dennis established Aesop with the aim of doing things differently,” Santos said. At the time, very few companies were using botanical ingredients, however Dennis, being a hairdresser, understood the role essential oils could play and the remarkable benefits they could deliver to the skin and hair. Thus, Aesop was born, and four years later in 1991 the brand expanded into skincare products.

Since then, Aesop has branched into the fragrance and even pet care categories, establishing itself as an industry authority and racking up along the way not just devotees but also plenty of other brands who’ve taken a cue from Aesop’s iconic look. Still, Aesop remains a brand that continues to march to its own beat. “It has always been our mission to focus on Aesop as a brand and not be distracted too much by what others are doing,” said Santos. “Our products are made with a clearly identified purpose, not for the sake of needing a new launch or to be in line with others.”

As for what’s inside, all Aesop products are vegan, meticulously formulated with essential oils and natural extracts claiming a multitude of skin benefits, and many are considered Byrdie clean. “We focus our efforts on the contents of the jar and rigorous scientific research, rather than on excessive packaging, celebrity endorsement or empty promises.” There’s basically something for everyone. Whether you’re oily-skinned, dry-skinned or somewhere in between, there’s a botanically-boosted cleanser, toner, serum, moisturizer and mask made for your skin.

Not surprisingly, Aesop’s latest foray has been into fragrance. Partnering with renowned perfumers Barnabé Fillion and Céline Barel, the brand has created a line of fragrances designed to intrigue—AKA they won’t smell like anything else you’ve tried before.

When it comes down to it, Aesop is a brand for everybody, inclusive of age, gender and location, Santos added. “Caring for the skin is universal. We believe in an uncomplicated approach and one that optimizes the skin’s natural equilibrium.” 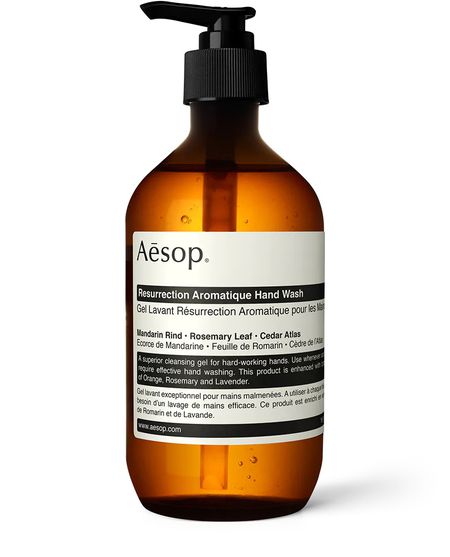 Guaranteed to convert anyone who thinks “hand wash is just hand wash” to pull a 180, this exceptional pick leaves hands feeling clean, soft, and never stripped. It even has tiny exfoliating grains to smooth and revive skin, but its true magic lies in its fragrance. Aptly-named ‘Resurrection,’ it’s a blend of citrus, woody and herbaceous notes that makes you want to get up and dance, or at least think happier thoughts. 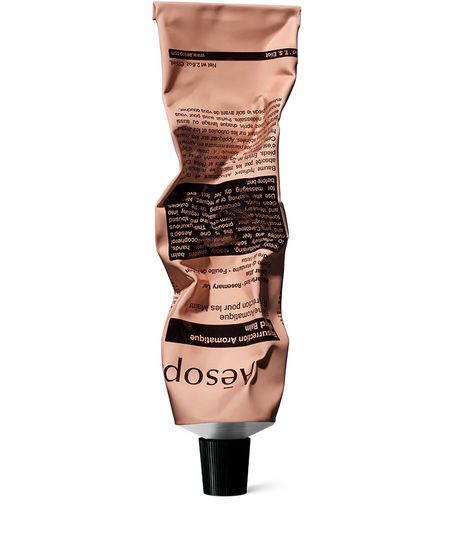 Loaded with the same uber-uplifting fragrance as the hand wash, this hand balm also makes a great body cream. It’s thick, luscious, and goes on feeling like heaven-scented butter, but isn’t at all greasy. And the scent lasts just long enough to keep your mood afloat. 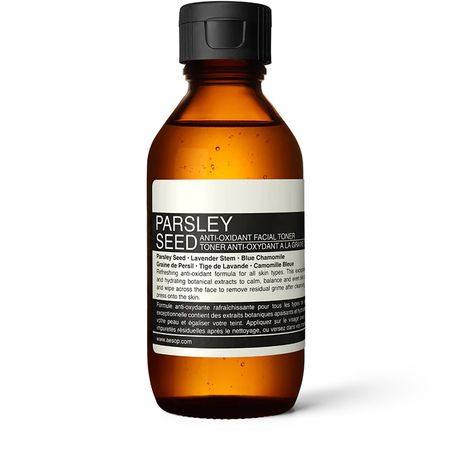 This toner was the seminal product in the now famous Parsely Seed line of facial skincare products. High in skin soothing and protective antioxidants, it’s a great way to give your skin an added boost of TLC before you even start with your normal routine. 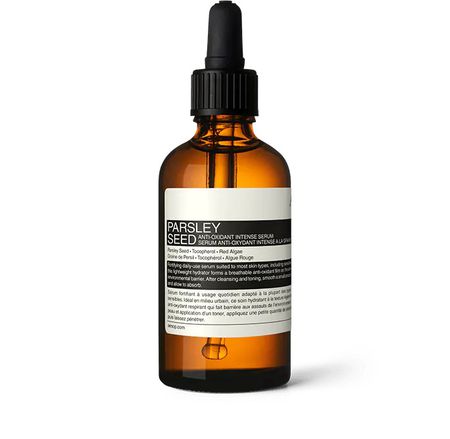 The latest product to be added to the bunch, but still getting plenty of attention, this intense daily serum is powered by parsley seed, tocopherol (vitamin E), and red algae to form a lightweight, yet breathable film on the skin that provides antioxidant protection against airborne pollution. A must-have for city-dwellers. 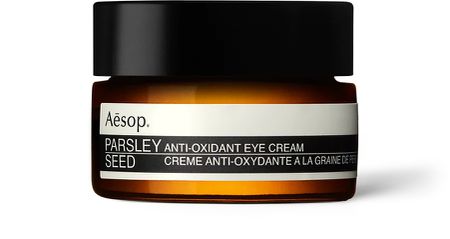 This medium-weight eye treatment gets the job done every time. It contains vitamin C and vitamin E plus shea butter and jojoba seed oil to keep the eye area moisturized and hydrated and feeling so refreshed and smooth. Tens all across the board.

Think of this mask as a spa day for skin. Its main focus is to address compromised skin barrier function, whether from overdoing it with actives or simply from the toll of daily excesses such as poor diet, harsh weather, flying, or skin-parching caffeine. Stacked with squalane, niacinamide, sodium carageenan, and frankincense, this gel-cream mask helps reestablish skin’s moisture level and make it stay put. Leave on for half an hour and give your skin a drink of water, or leave on all night and wake up to fresher, totally hydrated skin. A necessary luxury for sure. 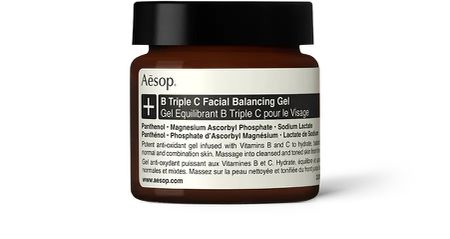 This lightweight gel moisturizer is like all-in-one insurance for oily-to-combination skin types. The aloe vera-based formula delivers instant lightweight hydration while vitamin B and vitamin C infuse antioxidant protection into skin, all with a cooling sensation and a matte finish. 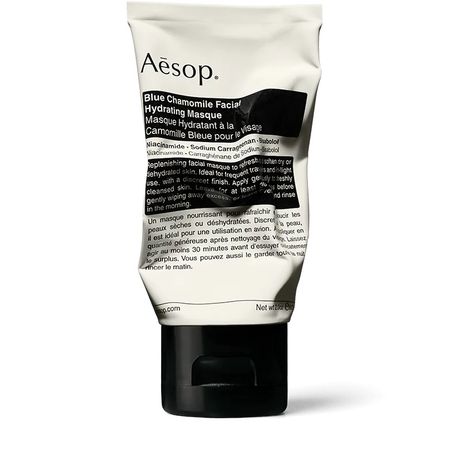 Another Aesop mask that covers all the bases, this one’s claim to fame is that it’s ideal for all skin types. Made with ingredients like niacinamide, bisabolol and chamomile extract, it’s ace at calming and cooling skin whenever it feels a bit red or angry. Great for after-sun, the next morning, or anytime your skin needs a serious pick-me-up. 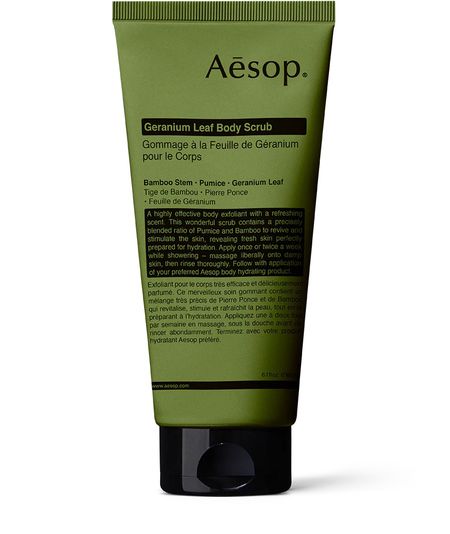 As far as body scrubs go this takes the cake, but instead of a sweet cake it’s an exotic, very green-smelling concoction that’s both calming and invigorating—like a fresh summer day just after it rains and the sun’s about to come out. And the scrub itself is just the right amount of grit to leave your skin feeling smooth and refined but never stripped. 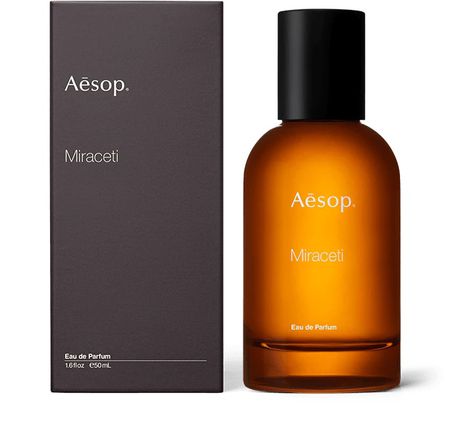 One of the latest eau de parfums from Aesop’s recent Othertopias fragrance collection, Miraceti stands out for being a truly intriguing fragrance. It’s woody and earthy, but also has a mysterious quality to it that will keep people guessing, which is definitely a good thing.