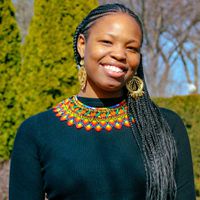 Jada Jackson
Jada is a freelance writer who has contributed to Allure, Vogue Business, The Zoe Report, and more. She has been a Byrdie contributor since 2022.
Byrdie's Editorial Guidelines

In the fashion world, the disability community is rarely a top priority. Often, adaptive and inclusive styles are seen as an afterthought. Fortunately, in recent times, there has been an emergence of mainstream brands and retailers such as Tommy Hilfiger, Target, and JCPenney have created collections aimed at filling this wide gap in the fashion market. For many designers this might be a smart move as the adaptive fashion industry is set to be worth $52 billion in the US and will rise to $54 billion in the coming year.

Though mainstream brands are adding adaptive lines to their current collections, there have long been smaller, independent brands who have made it their sole mission to provide inclusive clothing to the disabled community. Below, Byrdie spoke with five adaptive fashion brands from across the world to discuss how they started and the future of their labels.

British designer Vongi Noreen Ruzive created her inclusive label Von Ruz for those of all abilities due to her experience growing up with her brothers who were on the autism spectrum. The Paris College of Art alumna’s current collection features blazers, trousers, and skirts with magnetic zips, snaps, and accessible wrap around details.

"Such features not only serve as a functional purpose for those with disabilities but can also serve as a styling element for those without disabilities," says Ruzive. “For example, my fully detachable blazer design makes it easier for an individual to wear with a prosthetic arm, [while] a non-disabled woman may like to wear the same blazer with sleeves halfway zipped to create a slit.”

Ruzive believes there is a long way to go when it comes to integrating inclusive designs. Mainstream brands may showcase models with disabilities but could still lack the supply in their offerings. “I think it may take some time for, particularly mainstream brands, to undergo their research and begin implementing within their businesses,” she adds.

With her current focus being zoned in on the U.K. and France, she also hopes to one day push further into the international market to offer her designs to anyone who can benefit from them.

After seeing her cousin struggle to find fashionable clothing as a person with dwarfism, Sema Gedik was inspired to create her fashion label Auf Augenhoehe. The label is built on the principle of equality, with its name meaning “seeing eye to eye" in German. Gedik believes that well-fitting clothing for those with dwarfism should not be a rarity. “Before we entered the market, our customers had to [figure] in severe alterations of their clothes from conventional brands,” Gedik shares.

In order to ensure that the size and fit were correct for the majority of her customers, she spent hours researching and talking with the community to find out how to make the clothing more accessible, like strategically placing buttons and zippers.

“Historically, the fashion industry has always drawn boundaries, whether between genders, body proportions, beauty ideals, or status," says Gedik. “However, many of these divisions are no longer relevant in our globalized world and boundaries should be broken.”

Adaptive fashion label Kintsugi draws its name from the traditional Japanese art of fixing and repairing items, such as pottery, with gold. “The ethos behind it demonstrates that our perceived 'flaws' or 'imperfections' are actually what make us unique," says founder Emma McClelland. "No matter what happens in life, we are never truly 'broken.'"

She came up with the idea to build her brand after watching a TED talk discussing the lack of options for disabled consumers in the fashion industry. She explains that while there were a couple of companies making adaptive clothing, many were more concerned with functionality, and they failed to consider the overall aesthetics.

After spending much of 2018 researching and understanding some of the concerns in the disabled community, Kistingi’s launched its first collection later that year. “You don't have to make huge changes to make clothing more inclusive. It's just small tweaks here and there that can make a world of difference,” says McClelland. Many of her designs address details ,like troublesome buttons, and are accommodating to medical devices including ostomy bags.

In the upcoming years, Kistingi hopes to launch menswear, but is hoping to gain greater support with outside retailers. “I hope they will realize soon that there is a consumer need for inclusive fashion," she says. "And it's not just the right thing to do, it's the right thing for business as well."

For the last 13 years, the brand IZ Apadtive has been at the forefront of creating inclusive clothing for the disabled community. The Canadian label was launched back in 2009 by Isabel Camilleri, who wanted to make fashion more accessible to people with physical impairments. In the past, the designer had created several custom pieces for a client who was a wheelchair user and realized there was a viable market for adaptive fashion.

"The most inspiring moments come from our customers," Camilleri says. “When they share their experiences with the brand and how it makes them feel, this is what helps me continue to do the work I do.”

Kenyan designer Angela Wanjiku came up with the idea for Hisi Studio as her senior project in college, but she would soon realize its actual potential as a thriving label. All of her designs are targeted at those with sight impairments, which is often overlooked even in the adaptive space.

Wanjiku believes the key to making a truly adaptive clothing line lies in co-creating and designing pieces with the community you are serving. “This also applies to other groups where the designer is an outsider," Wanjiku says. "One cannot truly design inclusively without the contribution of their target users."

The integration of braille and QR codes into clothing are some of the main ways Hisi Studio hopes to make its pieces accessible to those who are visually impaired.