"Acne Positivity" Is the Instagram Movement You've Been Waiting For 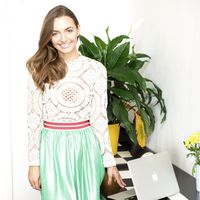 Kendall Jenner hit the 75th Golden Globes red carpet in a tulle Giambattista Valli dress—black, in support of the #MeToo movement. But the internet didn’t care so much about her outfit. Instead, people wanted to talk about the 22-year-old’s acne. Some trolls predictably shamed Jenner for her skin. However, the digital public overwhelmingly applauded her for reiterating what we all know to be true but is rarely reflected in the media or by social celebrities on Instagram: Acne is both common and indiscriminate.

One fan tweeted, “Ok but @KendallJenner showing up and strutting her acne while looking like a gorgeous star is what every girl needs to understand,” to which the model replied, “never let that shit stop you!”

The chatter about Kendall’s skin is a great temperature check on a larger conversation that’s been swelling online about acne and seems to be approaching boiling point. Dubbed both “pro acne” and “acne positivity,” there’s a push against skin-shaming on social media right now that we all need to celebrate.

Of course, celebrities openly posting about their struggles with acne is not new—Lena Dunham, Lorde, Cameron Diaz, Keira Knightley, and Emma Stone are just some of the names who have admitted to feeling embarrassed or insecure about their breakouts. However, the tone feels different right now as influencers embrace a more positive, IDGAF attitude toward pimples. We see it in entertainment as well, with directors like Greta Gerwig choosing to show acne in her critically-acclaimed coming-of-age film, Lady Bird.

You can thank young body image activists and Gen Z influencers, such as Hailey Waitt and blogger Em Ford, for breaking the taboo and shifting the conversation on beauty blogs from acne treatments to acne positivity. Waitt has 133,000 followers and ’grams under the account @piggs. In her bio, the 18-year-old describes herself as a “pro pizza face,” artist, and musician. Her close-up selfies show breakouts and scars, and her followers adore her for it: “She makes [acne] beautiful again,” one commenter wrote. Another said: “Thank you. You made me love me and love my acne.”

Em Ford @paleskinblog is another young woman pushing for acne positivity. In a YouTube video that went viral in 2015, she called out some of the body-shaming comments she received from trolls online.

Today, Ford has over one million followers and regularly shares photos of her acne—completely makeup-free. She regularly and publicly hits back at anyone who tells her she should address her “skin issues.”

Pimples might be considered by some as a frivolous topic for which to advocate, but consider this: 50 million Americans have active acne, 15% of whom are adult women. About 85% of young adults (between ages 12 and 24) have acne. In a society that values clear skin—whether it’s achieved through hitting the genetic jackpot, Accutane, or mastering FaceTune—you can bet acne and acne scars are going to have an impact on everyone's mental health.

To wit: According to a study published by the British Journal of Dermatology, people with acne are at substantially higher risk for depression. British researchers found that people with acne have a 63% increased risk of depression during their first year of acne compared to those without it. Researchers concluded that acne has a “substantial” impact on a person’s mental health.

With that in mind, we should consider acne to be one of the most important frontiers in a recent social media self-love push that’s been challenging stereotypical views on other “imperfections” like stretch marks and cellulite. (Remember when Chrissy Teigen posted a photo of her stretch marks in 2015?) The message behind this movement is clear: If you want to treat your breakouts, then that’s great. But if you don’t, well, more power to you.