Ask a Dermatologist: The Reason You're Breaking Out Between Your Brows

And how to fix it.

Types of Acne Between Eyebrows Causes and Prevention
Treatment

Brows are one of the most noticeable face-framing features we have and frequently one of the facial characteristics people notice on first glance. The brow-obsessed know how imperative it is to stick to a strict grooming schedule and keep their go-to brow products in their back pocket at all times. I'm admittedly a brow enthusiast. Unsurprisingly, I've dished out my entire overtly extra routine. I've also interviewed experts on how to fix all of your brow woes if growing them out has been a struggle for you.

On that note, acne between your eyebrows is quite annoying—but it's also incredibly common and largely boils down to one thing: "The blockage of the duct between the oil gland and the skin surface," explains board-certified dermatologist Craig Kraffert, MD. That blockage is what makes the T-zone such a tricky area on the skin, in general.﻿﻿ However, pimples feel a bit more manageable when they're in less obvious places than smack-dab in the middle of your face. Ugh. If this has become a frustrating recurrence for you, don't worry.

Below, Kraffert and Jacqueline Schaffer, MD, dig into the causes of acne between eyebrows and how to fix it for good.

Types of Acne Between Eyebrows

• Pustules: Small, pus-containing bumps that commonly form on the face. These are often red and tender and usually form as a result of bacteria and oil. "In certain circumstances, oil gland activity in the T-zone area may be higher than elsewhere on the skin, and with that activity may come increased incidence and severity of breakouts in acne-prone individuals," explains Kraffert.

• Papules: A solid elevation of the skin that contains no visible fluid, which forms from excess oil and bacteria. These could come about as a result of a reaction to something like an eyebrow wax (more on that, below).

• Cystic acne: Schaffer points out that things like hormones, bacteria, dead-skin-cell buildup, and environmental factors like smoke, ingrown hair, overproduction of oil, makeup, and diet can play a key role when it comes to pimples, spurring cystic acne.

Causes and Prevention of Acne Between Eyebrows

• Excess oil: As Kraffert emphasizes above, the fundamental issue that leads to acne between the eyebrows is the blockage of ducts due to excess oil. "It's what happens after this blockage occurs that determines the type of acne and acne lesions that develop," Kraffert adds.

• Eyebrow-waxing: It's important to take precautions in how your skin is reacting to the method you're using. For example, if you're waxing, according to Schaffer, that can very well be the reason you're breaking out between your brows. "One of the best-kept secrets for preventing acne between the eyebrows is replacing waxing with sugaring," she recommends. "Sugaring encompasses three ingredients to remove the hair and avoids causing inflammation or harm to the pulled skin. Versus if you wax, it contains several ingredients and causes harm and redness to the skin. Just note that some estheticians prefer to exfoliate prior to starting the sugaring process, which can inflame skin (and subsequently, your breakouts)."

• Diet: Your diet could be causing a domino effect with your liver and your T-zone area. In addition to trying a different grooming method, you should make some healthier choices with your diet (like avoiding dairy), which can help make a difference. Kraffert brings up the importance of maintaining a diet that incorporates fatty, omega-rich fish, such as salmon, which support skin health (though it's not proven to support acne specifically). And he says milk consumption, especially skim milk, is correlated with an increase in acne risk.

• Picking: The last thing you want to do is add to the problem. As important as it is to do all that you can to prevent this from happening again, Kraffert calls out how vital it is to not do certain things, like pick and squeeze the acne. "While acne surgery expertly provided by a dermatologist can be very beneficial, attempting cystic acne intervention at home often does more harm than good to one's overall complexion and acne condition," Kraffert warns. "Picking acne also greatly increases scarring risk. Additionally, avoid aggressive at-home physical scrubs, such as apricot seed cleanser, because they may cause more acne flares. Some milder and more elegant skincare products can provide excellent results in acne management with a better tolerability profile."

• Dirty hair: Not to add even more to your to-do list, but it's better to be safe than sorry and add these habits to your routine as well. "If the pimples are related to dirty hair like bangs, then make sure to shampoo the hair and use a light emollient conditioner," Schaffer says. 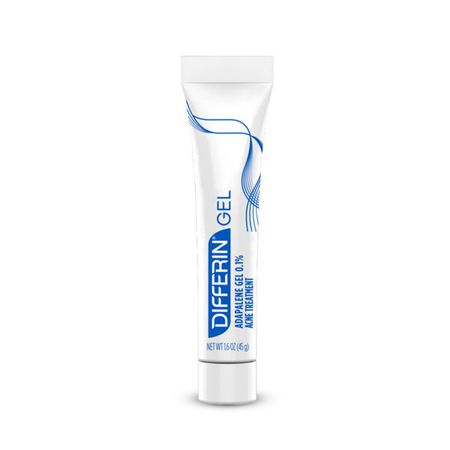 Benzoyl peroxide is an organic acid in the peroxide family that has been used to treat acne because of its keratolytic, moderate comedolytic, and antibacterial properties, which include the reduction of P. acnes and Staph. aureus on the skin.﻿﻿

Kraffert is a proponent of the daily application of topical retinoids like Differin, which is a good over-the-counter choice; benzoyl peroxide; or prescription oral medications.

Retinol works to exfoliate the skin, leading to a faster turnover of skin cells and a smoother texture overall. It takes a while to notice a difference, though, so it’s the kind of ingredient that needs to stay in your routine for quite a while. High-strength retinol products are available with a prescription, but it's best to ease into use with a lower-strength product. "Differin Gel is a mild and efficacious retinoid," Kraffert explains. "It's available without a prescription, so you can use it [once daily at maximum]." This product may be irritating and drying, so start by using it just a few nights a week. If you use too much at once, you'll likely notice red, flaky, and (frankly) angry skin. 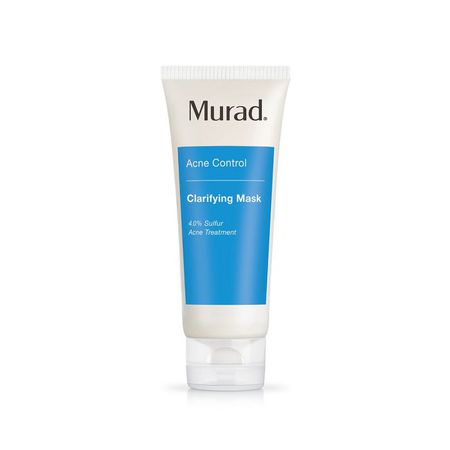 In terms of products, Schaffer relies on this clarifying mask from Murad, which contains rare earth clays, Kaolin, and Bentonite. The clay-based product is meant to purify the skin and absorb excess oil. Sulfur also works to detoxify the skin by drying out pimples and preventing future breakouts. A host of other good-for-you ingredients (think licorice root extract and zinc oxide) help to heal the skin without stripping it of moisture.

It can be used once or twice weekly, as a mask, but Schaffer recommends using it more often, as a spot treatment. "Murad's clarifying mask is gentle and effective with its anti-acne ingredients," she explains. "It's part of a set, but I tend to just apply the mask to certain pimples to see results immediately." 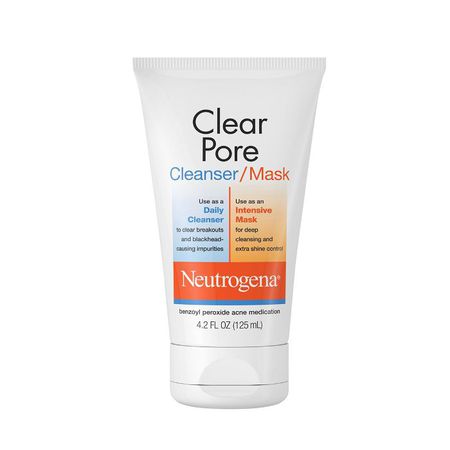 Kraffert recommends looking for products that contain a hefty dose of benzoyl peroxide, like the above option from Neutrogena. "It's extremely efficacious for acne care when used regularly," he confirms. "It's also great for spot treatment. Benzoyl peroxide has been marketed in the United States for half a century.

Over the years, dermatologists have often considered this the one acne medicine they'd like to have for patients if they were ever stranded on a desert island. It is profoundly antibacterial and comedolytic. These two properties make it work extremely well."

Benzoyl peroxide works to zap acne-causing bacteria beneath the skin, increasing cell turnover so that the old breakouts will fade away. Even better, it sheds sebum and oil from pores so new breakouts won’t form (or, at least, not as often). It can be harsh on sensitive skin, though, so it’s worth exercising caution and using plenty of moisturizer in conjunction with a benzoyl peroxide-rich product.﻿﻿ 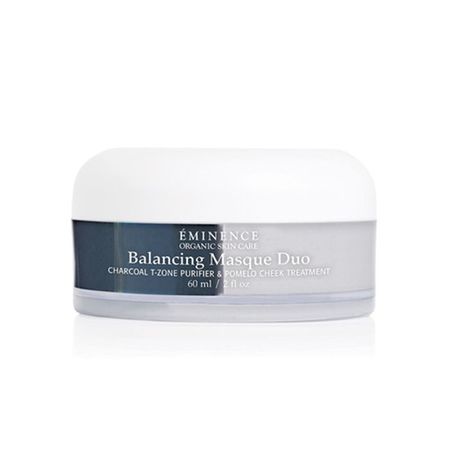 While more research is needed, charcoal might help draw out impurities in the skin, drying up breakouts and clearing skin over time. It's meant to act as an allover detoxifier, sopping up excess oil and tightening pores, too. It's also not as strong as some other ingredients (like benzoyl peroxide or retinol), so it likely won't dry out skin or strip it of too much moisture.

Charcoal-based products are plentiful these days and include everything from blotting papers to facial mists, but Schaffer relies on the above mask for those looking to treat acne between the eyebrows. "Eminence Balancing Masque Duo has charcoal as its main ingredient, and it's able to penetrate deep into the open comedones," Schaffer explains, which is why she loves using this mask as part of an anti-acne regimen. It's a two-part product, with one mask specifically formulated for use on the T-zone and another for use on the cheeks. 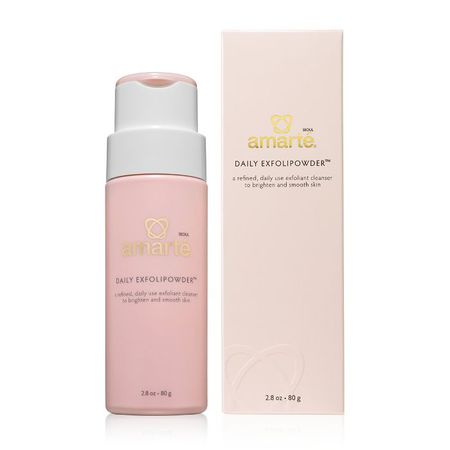 Before applying any other topical products, cleansing your skin is key. Kraffert swears by this one: "The foam cleansing effect lifts oils and soluble debris while the super-fine grain powder exfoliates the outermost stratum corneum," Kraffert says. "I love ExfoliPowder because it cleanses thoroughly and exfoliates to a polished finish without irritation. The plant seed-based exfoliants will effectively remove any particles congealing at the surface but are gentle enough for daily use, so you could use it every day. Daily ExfoliPowder delivers for acne-prone skin through three key mechanisms."

Just in case you needed any more convincing, these are the mechanisms: "First, ExfoliPowder lathers in a way that thoroughly lifts oils, scale, and debris from the skin surface to help pores stay open. Second, physical exfoliation is perfect. It's enough to help remove more adherent scales and oil-blocking pores but mild enough to not flare acne through irritation. Third, it’s purified nano-sulfur helps further exfoliate pores, purify the skin surface, and keep inflammation away," he says.

Dry out spots with sulfur. 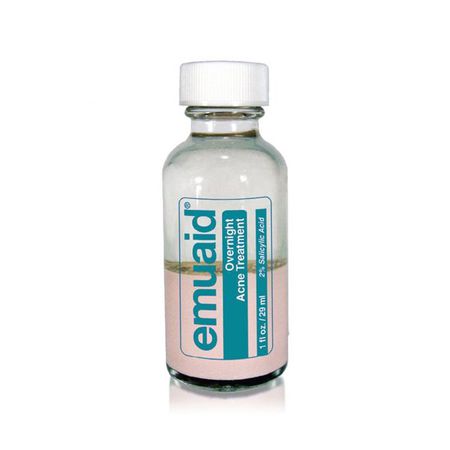 Schaffer believes in Emuaid's overnight treatment because it's made of sulfur, which is known to be a powerful ingredient for treating acne. Sulfur promotes exfoliation and dries up acne between the eyebrows. It's a natural element (so it's milder than some other products that target acne between the eyebrows), but it's still powerful. Not only will it work to dry out current blemishes, but it fights acne-causing bacteria and can therefore prevent future breakouts.﻿﻿

Emuaid's two-phase product works on everything from blackheads to cysts, exfoliating the skin and fighting the bacteria and infection that leads to breakouts. Users say it reduces the size and redness of spots overnight, making it a good choice for use before a big event. (It also helps with pain in case you happen to be battling an especially large blemish.) 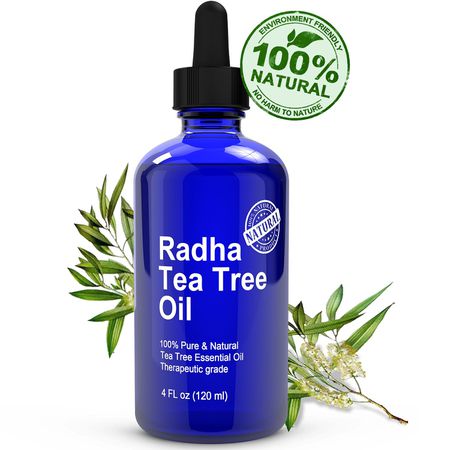 This miracle ingredient comes in handy particularly well for those who accidentally leave their makeup on overnight. Tea tree oil targets bacteria in the skin—ideal for those struggling with acne between the eyebrows. "Leave the tea tree oil on for four hours, and the pimple will minimize," advises Schaffer.

Because it's an oil, though, it won't wreak havoc on the skin, and can actually help calm redness. A 2006 study found that tea tree oil's antimicrobial properties might make it beneficial for acne sufferers, as it targets the bacteria responsible for breakouts.﻿﻿ In addition to using it as a spot treatment, you can always add a few drops of pure tea tree oil to other products (such as toners, mists, or even moisturizers), to reap the benefits without using it directly on the skin.

Face Mapping: Can Your Breakouts Provide Clues to Your Health?
Article Sources
Byrdie takes every opportunity to use high-quality sources, including peer-reviewed studies, to support the facts within our articles. Read our editorial guidelines to learn more about how we keep our content accurate, reliable and trustworthy.